We visit Jeri Redcorn, Caddo potter in her studio 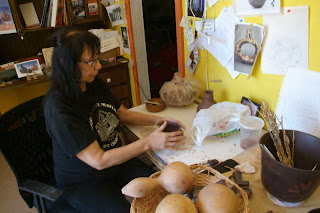 Jeri Redcorn has revived the Caddo tradition of pottery.
http://www.ehow.com/about_4576901_caddo-pottery.html
Caddo pottery was made for over 1,000 years beginning around A.D. 800. The most basic function of Caddo pottery was to fulfill everyday needs--vessels to cook in, drink out of and for storing items. Fine Caddo pottery also served to fulfill ceremonial needs and has been found in many Caddo gravesites. Forms of Caddo pottery are the most common items found in Caddo gravesites because they served as storage vessels for food left for the deceased and as gifts for the deceased.
Caddo pottery played such an important role in Caddo culture that historians have been able to use it to piece together much of early history, lifestyle and the world view of the Caddo Indians.
Jeri discussed with us how the Caddo were an innately communal society where they joined together to perform their social activities including the making of their pots until the federal goverment began to attempt to "civilize the indians" and in the process destroying their traditions and way of life.
http://en.wikipedia.org/wiki/Dawes_Act

By dividing reservation lands into privately owned parcels, legislators hoped to complete the assimilation process by forcing the deterioration of the communal life-style of the Native societies and imposing Western-oriented values of strengthening the nuclear family and values of economic dependency strictly within this small household unit.[16]
The land granted to most allottees was not sufficient for economic viability, and division of land between heirs upon the allottees' deaths resulted in land fractionalization. Most allotment land, which could be sold after a statutory period of 25 years, was eventually sold to non-Native buyers at bargain prices. Additionally, land deemed to be "surplus" beyond what was needed for allotment was opened to white settlers, though the profits from the sales of these lands were often invested in programs meant to aid the American Indians. Native Americans lost, over the 47 years of the Act's life, about 90 million acres (360,000 km²) of treaty land, or about two-thirds of the 1887 land base. About 90,000 Native Americans were made landless.[17]
It is ironic that by destroying the Caddo sense of community instead of embracing what they could have taught us about a healthy society focusing on cooperation we lost a great opportunity to improve our way of life and still allowed modernization to occur.

Here are some production shots of Bob with Jeri. 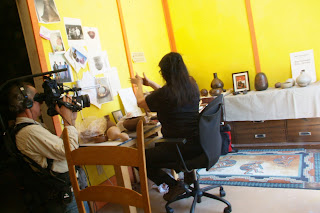 Jeri's studio is very compact but in that studio she creates works that come from the sincerity of her heart and her heritage. We will visit the Museum of the Red River in Idabel May 17th and see some of the pots of her ancestors that inspired Jeri to revive the long-lost tradition of her Caddo ancestors. She coil builds her pots and incises them with exquisite designs and patterns that connect to Caddo culture and then burnishes them with a stone. The incised areas are highlighted with a colored slip and then she wood-fires them in her backyard.
Below our several shots of Bob doing dolly shots to capture the range of some of Jeri's pots.
http://en.wikipedia.org/wiki/Tracking_shot
Tracking shot
From Wikipedia, the free encyclopedia
In motion picture terminology, a tracking shot (also known as a dolly shot or trucking shot) is a segment in which the camera is mounted on a camera dolly, a wheeled platform that is pushed on rails while the picture is being taken. One may dolly in on a stationary subject for emphasis, or dolly out, or dolly beside a moving subject (an action known as "dollying with").
The Italian feature film Cabiria (1914), directed by Giovanni Pastrone, was the first popular film to use dolly shots, which in fact were originally called "Cabiria movements" by contemporary filmmakers influenced by the film; however, some smaller American and English films prior to 1914 had used the technique prior to Cabiria.[1]
The tracking shot can include smooth movements forward, backward, along the side of the subject, or on a curve. Dollies with hydraulic arms can also smoothly "boom" or "jib" the camera several feet on a vertical axis. Tracking shots, however, cannot include complex pivoting movements, aerial shots or crane shots.[2] 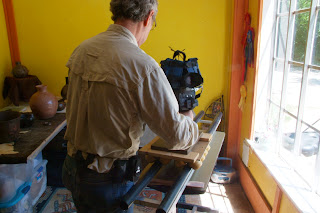 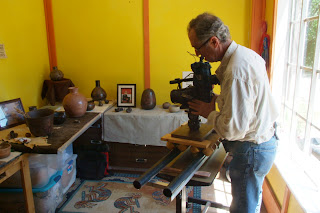