Oklahoma: land of contrasts, from severe drought to flooding

We are going to be meeting Oklahoma photographer, Kim Baker at the Illinois River May 20-21 for her Illinois River Survey to promote awareness of the issues facing the river from pollution etc. See a previous blog on her for more info.
http://creativenativeproject.blogspot.com/2011/04/kim-baker-conservation-photographer-and_14.html

Here is one of her bucolic photographs of the river. 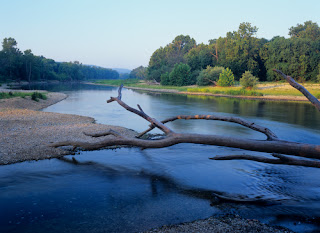 And here is what the river has looked like in the past few days after record rainfall and what is being called a 500 year flood.

Kim being an Oklahoman must feel that the waters will recede and the event will be able to continue. I'm sure we will see major signs along the river and in the town of Tahlequah of the flood damage
even when we arrive in late May. Our arroyos will have flash floods
in New Mexico and if you hear the sound of rushing water go quickly to higher ground as flash floods can travel a long distance with rain nowhere near where you are hiking.
http://www.inlandiapress.com/index.php/2011/04/27/500-year-flood-sweeps-oklahoma-arkansas-and-missouri/

Those who built homes and businesses along the Illinois River in eastern Oklahoma know the phrase ‘100-year flood.’ It represents an amount of water that should not be expected to occur more often than once per century or so. With experience as a guide, construction takes into consideration how high the next reasonable flood might reach.
Tuesday, the US Geological Survey used the term 500-year flood to describe the amount of water being swept downstream, much of it spilling well beyond the typical banks.
Businesses such as All American Floats, a river-rafting company whose office was overrun with water on Tuesday, have seen high water before and thought previous reconstruction would take care of any future flood levels. Inside the front door of their Illinois River office swirled five feet of muddy river water.
The previous record for the Illinois at Watts, Oklahoma, in Adair County, was the 28.6 feet mark set in 1960. Tuesday the river rose to more than 30 feet. The 500-year phrase was used by the USGS to describe the Illinois at Watts, meaning that there is only a 1-in-500 chance of that flood level being exceeded in any single year, although nature confines itself to odds about as often as floodwaters are confined to riverbanks.
Along the Oklahoma-Arkansas state line, a section of Oklahoma Highway 101 was swept away by runoff waters, forcing the closing of the road. Crews are expected to have the pavement restored by late Wednesday.