Editing a documentary takes far longer than most people think....... 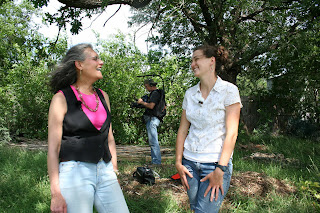 See Bob behind the scenes as always making this happen!
So we came back from Oklahoma with over 10 hours of footage from 21 days of filming which takes about 40 hours to input into the editing system. I am finding that most of the people I talk to think the shooting is the major part of the work on a film or documentary but this is not the case. A feature film may be shot in 30 days and then edited for a year before it is ready for release. On our documentary it will easily take Bob 150-200 hours of editing to put this piece together. Quality shooting is important but it is in the editing room where the magic really begins. Choosing what footage to 'leave on the cutting room floor' was what they actually did with film where pieces of film used to actually be physically cut out. Now feature films are working more with digital information for the rough cut to pick which takes they are going to use.
Video assist allows them to get this information.
http://en.wikipedia.org/wiki/Video_assist    For the techies among our readers! I resume our story below this technical info.

Video assist is a system used in filmmaking which allows filmmakers to view a video version of a take immediately after it is filmed.
Originally a small device, called the video tap, was installed inside a movie camera that allows (with the addition of a monitor) the director to see approximately the same view as the camera operator, and thus ensure that the film is being shot and framed as desired. This is done by using a small sensorchip (similar to ones in consumer camcorders) inside the viewfinder. On modern film cameras, the assist is fed off abeam splitter, which splits the beam between the optical viewfinder and the video tap. The light enters through the lens, and hits the rotating mirror shutter, which bounces the light to the horizontal ground glass. The beam splitter is directly over the ground glass and turns the light again 90 degrees, and projects it onto the chip of the video assist camera - through its own lens system. The chip, together with its electronics, lens system and mounting hardware is the video tap, and was commonly called video assist until the video assist industry grew large.

Nowadays, video assist is a name of a complex system, consisting of monitors, recorders, video transmitters, video printers, matrices and hundreds of yards of cables. The video assist crew - the video assist operators - are in charge of moving, operating, and troubleshooting the whole system which can easily fill a medium-sized truck. Their job is to run cables from all of the several cameras used on the show to a central location - often referred as the video village - where the director, DP, script supervisor, art director and several other crew members sit. When cameras are in unreachable locations, on the move, handheld, or steadicam-mounted, wireless transmitters are often used.
All the camera connections coming into the video village go into the video trolley. These come in several shapes and sizes and are often hand-built by the operator based on his/her own preferences and the needs of the show. On the cart are the video recorders, the most important equipment of a VA op. The cart usually holds a video matrix, for making quick interconnections, several small operator's monitors, a video printer, all the wireless receivers, speakers, computers, laptops, digitizing boards, UPSes, and a bunch of small tools. The camera images are then fed to the larger monitors for the director, and sometimes for a second array of monitors for the producers, clients, etc. More often than not the Director and DP request a smaller, more private monitor set, and then the second array can be watched by everyone else. Video is often fed to make-up trucks, production trailers, or separate monitors around set for cuing stunts special effects of puppeteers. A complex video assist can have up to 20 monitors depending on the number of cameras used. Wireless handheld monitors are often used so the Director can be close to the artists. On-board monitors, mounted directly on the camera, helps the Focus Puller to follow the shot.
On steadicam and remote head or crane operation the viewfinder and beam splitter is often removed because its not needed. Then the full image is projected onto the video tap, making the image twice as bright, and hence better quality (lower noise). In these cases, even the camera operator uses a video monitor to operate the camera.
Though the quality of the a video assist feed can vary greatly based on both the camera and the assist, it is always used as guide and nothing more. Because the assist has its own controls for exposure, contrast, focus and color correction, it is not possible to use it to learn anything more than the frame lines. The video assist camera is usually significantly lower in resolution than the film camera as well, so critical focus is still usually determined by distance from the lens to the subject via a tape measure.
Comedian and director Jerry Lewis is widely credited with inventing this system,[1] although some similar systems existed before Lewis first used a video camera to simultaneously film scenes with the cinematic cameras during production of The Bellboy in 1960.

While the traditional video tap no longer applies to modern CCD based cameras, large-scale productions with HD or SD cameras still use video assist in its wider meaning. In this case, the video signal is fed from the camera's own video output, and is a significantly better quality than the original video tap technology. HD cameras can output HD-SDI video signals, which, when presented on a high-grade calibrated monitor, is an almost what-you-see-is-what-you-get quality. Because the video cameras are often less tolerant of images with high contrast and quick light changes, and their behavior is harder to foresee than a film camera, DPs shooting HD cameras are often found in darkened tents, watching expensive HD monitors to make sure the image is captured correctly. This situation is getting better as newer cameras tend to simulate film gamma curves better.
We are shooting digitally so we don't need to reformat from film to digital. And by the way some feature films are now shot on very high-end video cameras. It is still a long process for us to complete the documentary. Before we even go out to shoot I spend about 40 hours researching subject matter, individuals and places we want to visit. Then we make up a rough schedule of where and when we want to shoot. Then we need to schedule with all the individuals and places. Things always come up on their schedule or ours that makes us have to reschedule continuously although generally we can stick to our schedule once we have it all booked and we are on the road.
Then we start booking lodging at all the locales we will be visiting at places that will be conducive for hauling all our equipment in and out, close enough to the location and comfortable so we can get a good night's sleep for challenging days. There are always 'curve-balls' that get thrown our way even with thorough planning. I will talk about them in another blogpost.....makes for some good stories....and keeps us on our toes.
Then when we return Bob begins digitally inputting into his editing system which will take about 40 hours with this amount of footage. Once it is inputted he digitizes the footage into quicktime movies, organizes and names every clip and puts them into folders so he can access them without going through all the footage again. He will spend at least 10 hours listening to music and soundtracks. Music does a lot more to create mood and feed our emotions as we watch moving images than most people think about. Take the music out and often the drama we feel as a viewer is not as strong. We will also in this documentary be researching and contacting musicians who have Oklahoma related songs etc. For instance we want to use some Choctaw and Caddo music in their segments. Of course we always have to make sure we have permission as copyright is an issue.
Then Bob begins editing and laying the footage he likes on a time line, listening and cutting extraneous footage as he goes. He inserts what is called B-roll which is footage shot to fill in interviews and other parts of the documentary to keep it filled with interesting imagery. For instance just a talking head as we would call an interview is very dry without other footage cut in over their dialogue. We always need to make sure we get enough B-roll when we are at locations. Sometimes for instance with an artist we may insert footage of their work, their studio  and sometimes even imagery derived from hi-res jpgs. When we interview a Nature Conservancy Preserve director we will put in lots of footage shot at the preserve over parts of his interview. This keeps the visuals moving and interesting to the viewer. Bob has an incredible eye and ear for putting all of this together and except for telling him what must be in the show to keep the content as I want it occasionally I leave this process up to his eye altho we do both sit together and discuss segments as he builds them. The other component is to create what we call voiceover of me talking to link the segments together. Often also we shoot introductory segments of me working in my studio and talking which brings it back to my artist's process as I introduce and talk briefly about each person we visit and place. These are very short but it takes a lot of shooting and reshooting to get a 'take' that we both like.
Then in the final process Bob does color correction often punching up the color to be more vivid as we believe our mind's eye sees it. It used to be that lighting and color could not be changed and now post-production contains a lot of color correction and enhancing of lighting through the new computer programs. So now you can see why Bob and I are nowhere near done and will be working through the summer and into the fall to finish our documentary.
Posted by Fran Hardy at 12:20 PM