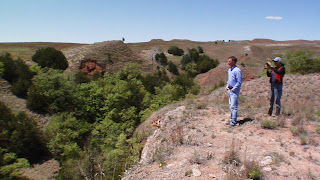 Well the first day of shooting almost always has it's glitches and challenges and my still camera locked up so I used Bob's little point and shoot which should be a chinch to use...however all I did was push the button to focus and never actually shot the pictures! I had I thought all kinds of wonderful shots of canyons, wildflowers and short and mixed grass prairie. Well tune in for production stills in the next couple of days as we have gotten my camera working again and I learned how to use Bob's.
However the interview with Chris was wonderful. He is intelligent, articulate and very passionate about the remote preserve he manages as a solo operation except when they are doing controlled burns. The land has experienced significant restoration under his caring and hardworking efforts. The prairie is an environment which experienced regular burns due to thunderstorms and also purposefully by the indians who realized that the game such as bison that they lived off of thrived on the grasslands. Without periodic burns the land becomes covered with cedar which suppresses the grassland environment the grazers thrive on. But it is important that the land is not overgrazed which destroys the delicate thin layer of soil. Chris is doing selective grazing with cattle to preserve the short and mixed grass prairie. The trees are down in the canyons which are formed where water runs through the bright red shale that makes up the land with areas of whitish gray gypsum. 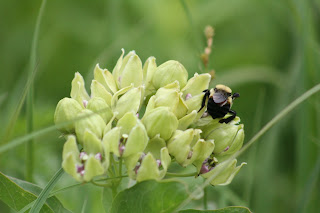 Milkweed
This has been a very dry year with no significant rainfall since the fall so many of the grasses were not greened out and there were less wildflowers but it was still spectacular. Chris took us to remote areas that not many people get to see for which we are very grateful. I wish I had pictures to post of the unusual landscape of the four canyons but we will be able to grab some in a later blog when we start downloading the video Bob shot. As Chris said this is either a place people fall in love with or can not see the beauty of it at all. 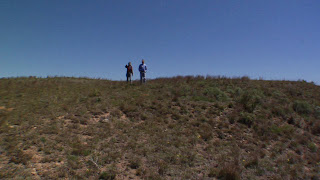 We thought it was extremely windy even coming from New Mexico but Chris said it was a fairly calm day. It is a place of extremes. 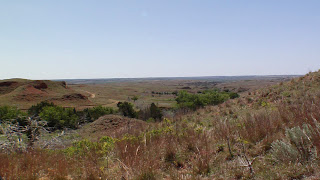 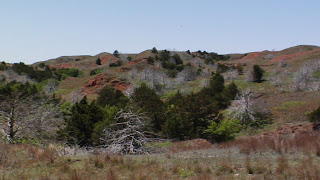 http://www.oklanature.com/prod/Packsaddle.pdf
For extensive information about the preserve from the Nature Conservancy click the link above.
For a history of how the preserve was formed...  http://www.spiritofthebuffalo.org/dedication.html

This is a photo of Keven's beloved Four Canyon Preserve...until Four Canyon, there were no preserves in northwest Oklahoma. Keven worked hard to bring this project into being, and one of the goals of the Spirit of the Buffalo project was to help pay for it. After Keven's death, her husband Ed and their friend Chris Hise, who manages Four Canyon Preserve, found a remote canyon on the 4,000 acres which they call "Keven Canyon". It was just the sort of place Keven loved to be.