I don't know if I will have wi-fi tomorrow when we arrive in Antlers, OK but if I do we will talk about the Keystone Ancient Forest and our visit to the studio of the talented and innovative artist Grace Grothaus in Tulsa. 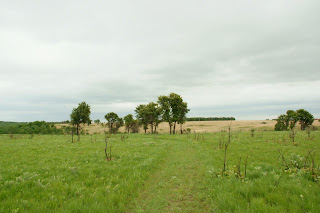 The prairie has great subtlety and needs to be seen close up to truly experience it's beauty.
Finally we arrive at the Tallgrass Prairie.....
I have been looking forward to it for so long. We woke up to a cold and windy day, not the usual 90 degrees for this time of the year in northern Oklahoma. We headed off to the Tallgrass Prairie. Normally the grass would be knee high this time of year and full of wild flowers but given the fact that they had their first rain in months several days ago the grass altho lush and green was not as tall as usual. We decided that we would also come back in the fall as we are coming back to the Mabee-Gerrer Museum of Art for the premiere of our Oklahoma series of documentaries from the Creative Native Project. If we go back to the Tallgrass Prairie in the fall the grasses should be about seven feet tall which will be spectacular. One of our first sights was a herd of bison which along with prescribed burns help to maintain the prairie habitat. 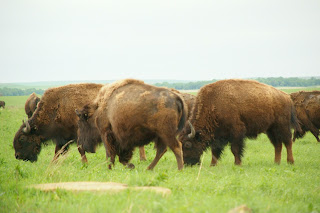 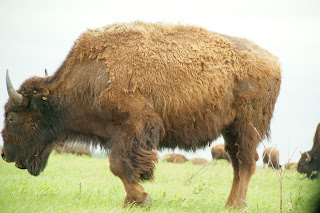 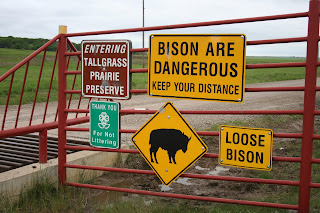 http://www.nature.org/ourinitiatives/regions/northamerica/unitedstates/oklahoma/explore/bison,-fire-and-the-tallgrass-prairie-preserve.xml
http://en.wikipedia.org/wiki/Tallgrass_prairie The tallgrass prairie is an ecosystem native to central North America, with fire as its primary periodic disturbance. In the past, tallgrass prairies covered a large portion of the American Midwest, just east of the Great Plains, and portions of the Canadian Prairies. They flourished in areas with rich loess soils and moderate rainfall of around 760 to 890 mm (30 to 35 in) per year. To the east were the fire-maintained eastern savannas. In the northeast, where fire was infrequent and periodic windthrow represented the main source of disturbance, beech-maple forests dominated. In contrast, shortgrass prairie was typical in the western Great Plains, where rainfall is less frequent and soils are less fertile.
As its name suggests, the most obvious features of the tallgrass prairie are tall grasses, such as indiangrass (Sorghastrum nutans), big bluestem (Andropogon gerardii), little bluestem (Schizachyrium scoparium), and switchgrass (Panicum virgatum), which average between 1.5 and 2 m (4.9 and 6.6 ft) tall, with occasional stalks as high as 2.5 to 3 m (8.2 to 9.8 ft). Prairies also include a large percentage of forbs, such as lead plant (Amorpha spp.), prairie rosinweed (Silphium terebinthinaceum), and coneflowers.
The tallgrass prairie biome depends upon prairie fires, a form of wildfire, for its survival and renewal.[1] Tree seedlings and intrusive alien species without fire-tolerance are eliminated by periodic fires. Such fires may either be set by humans (for example, Native Americans used fires to drive bison and improve hunting, travel, and visibility) or started naturally by lightning. Researchers' attempts to re-establish small sections of tallgrass prairie in arboretum fashion were unsuccessful until they began to use controlled burns.
Technically, prairies have less than 5-11%[clarification needed] tree cover[citation needed]. A grass-dominated plant community with 10-49% tree cover is a savanna.
Due to accumulation of loess and organic matter, parts of the North American tallgrass prairie had the deepest topsoil recorded. After the steel plough was invented by John Deere, this fertile soil became one of America's most important resources. Over 99% of the original tallgrass prairie is now farmland. 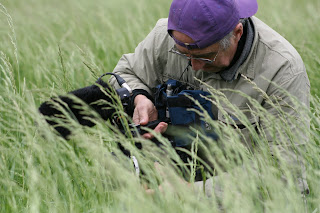 We followed a beautiful path that led through a lush grassy bottom scattered with wildflowers, large oak trees and a creek and then climbed into a small section of forest that led along a steep cleft in the land. 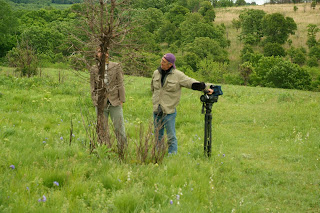 As we climbed to the top stunning meadows regaled us dotted with wildflowers and remnants of oak trees from burns with bits of orange red and bright green leaves emerging from the ground as the oaks tried to revive themselves. 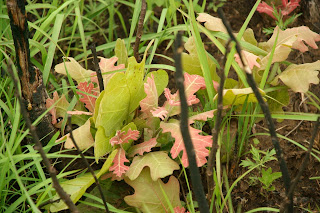 The Nature Conservancy had mowed only the path which was dotted with clover blooms. I found wild strawberries and a multitude of flowers not all of which I can identify altho I think the bright violet blue ones are spiderwort 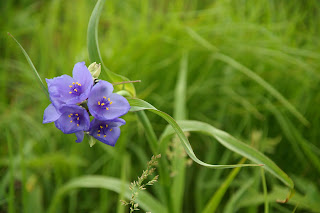 and there was a unique type of milkweed in soft green tones with violet stamens that I think I have heard called Elkhorn Milkweed. 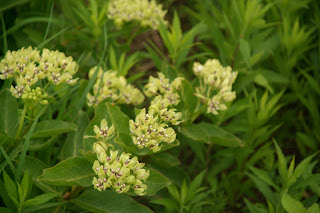 I will look this up. The vistas of varieties of grass, trees in the canyons and big sky were unearthly gorgeous despite the cold wind. Tomorrow we will return to interview Bob Hamilton from the Nature Conservancy, director of the preserve. 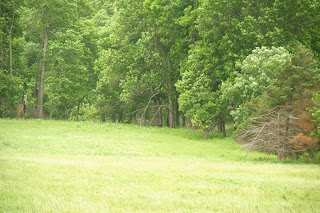 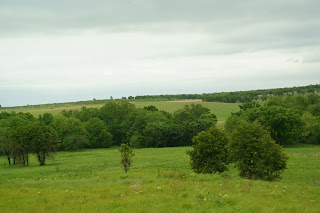 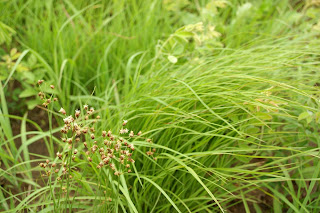