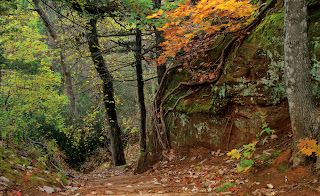 Red Rock Canyon by Kim Baker copyright
It is hard to capture the true lusciousness of what we see in nature with our eyes through a camera as so many other things like sound and smell filter our experience, but somehow Kim Baker captures that visceral experience of being there. As a Conservation Photographer she also brings awareness to the wild places in Oklahoma that need to be preserved. Many people outside of Oklahoma do not realize how varied and beautiful the state is.
http://www.travelok.com/listings/view.profile/id.6275
http://www.stateparks.com/red_rock_canyon.html
The links above will take you to basic info about Red Rock Canyon State Park in central Oklahoma near Hinton. 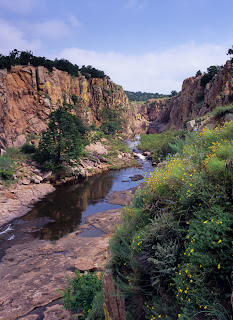 Wichita Mountains by Kim Baker copyright
http://www.fws.gov/southwest/refuges/oklahoma/wichitamountains/
We went to this fascinating area with Katherine Liontas-Warren and her friend and fellow artist Jack Bryan. Look at previous blogs for a description of our trip and Katherine's stunning drawings and prints in black and white, of the Wichita Mountains. I highly recommend a trip to this refuge. There are so many stunning areas in the park that we did not get a chance to see but will go back to on another trip.
http://en.wikipedia.org/wiki/Wichita_Mountains
The Wichita Mountains are located in the southwestern portion of the U.S. state of Oklahoma. The granite mountains, about 500 million years old, are rounded by weathering. The Wichita Mountains Wildlife Refuge, a favorite for hikers and rock climbers in the region, is located adjacent to Cache, Medicine Park, Indiahoma, and historic Meers while just a short drive from Lawton. Buffalo, elk and deer are protected on the 59,020-acre (23,880 ha) wildlife refuge. The Field Artillery capital of the world, Fort Sill, occupies the southern part of the range. Backcountry camping is available in the Charon Gardens Wilderness area. It is also home to Treasure Lake Job Corps. Additional points of interest are the Wildlife Refuge visitors center, Holy City of the Wichitas, Quanah Parker Lake & Dam, Lake Lawtonka, and Quartz Mountain Nature Park.
[edit]
Geology
The geologic history of the Wichita Mountain region began with the deposition of late Precambrian to early Cambrian sandstones. These sandstones were intruded by coarse gabbro sills of about 575 million years ago[1] as the region began to rift apart in a failed continental breakup. The gabbro intrusion was followed by erosion and further intrusion of granite accompanied by volcanic eruptions of rhyolite lava and explosive volcanic breccias some 50 million years later.[1] Following these igneous episodes the region subsided and shallow sea sediments were deposited over the area consisting of sandstones and limestones.
During the Pennsylvanian Period (330–290 million years ago) the region was subjected to intense pressure during the continental collision or orogeny which produced the Ouachita Mountains to the east.[2] This resulted in faulting and folding and the formation of the Southern Oklahoma Rift. This rift strikes in a WNW direction and includes the Arbuckle and Wichita Mountains of southern Oklahoma and the Amarillo Uplift of the Texas Panhandle.[2] Up to 20,000 feet (6,100 m) of local uplift occurred during this time.[3] This uplift created rugged mountains which have been reduced to their present state by erosion. At 2,464 ft (751 m) Mt. Scott is the second tallest mountain within the Refuge boundary. Mt. Pinchot in the Special Use Area is 12 feet (4 m) taller. A paved road leads to the summit of Mt. Scott, from which visitors can see for dozens of miles on a clear day. The highest peak in the Wichita Mountains (including areas outside the refuge) is Haley Peak, at 2,481 ft (756 m). Haley Peak (officially unnamed) is located on private property just outside the NW corner of the refuge. [Haley Peak Elevation information from records stored at USGS/NSDI Standards Team/NGTOC III/Mid-Continent Mapping Center/Rolla, MO.]
When the area was part of Indian reservations and therefore off-limits to non-Native Americans, the Wichita mountains were rumored to contain rich gold deposits. When the area was first opened up for settlement, many prospectors staked mining claims, and towns were laid out to serve the presumed bonanzas, but no economic deposits were found. The gold boom was prolonged by some unscrupulous assayers who found gold in every sample, but the miners eventually gave up, leaving behind ghost towns such as Wildman, Oklahoma.[4] 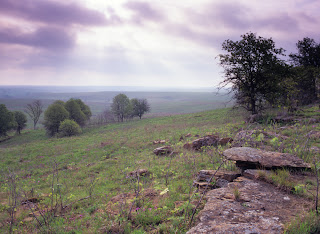 Tallgrass Prairie by Kim Baker copyright
This was one of my favorite  places that we visited and you can go back to earlier blogs to read about our time there. It has a very subtle beauty that is particularly hard to capture but once again Kim does it masterfully. We plan to go back in the fall when the grasses are seven feet tall as we will be in Shawnee for the premiere of our documentaries on Oklahoma from the Creative Native Project which focuses on art, sustainability, creativity, mentoring and cultural preservation and how they support each other.
http://www.nature.org/ourinitiatives/regions/northamerica/unitedstates/oklahoma/placesweprotect/tallgrass-prairie-preserve.xml
We thank the Nature Conservancy for protecting and enhancing sustainability in this special place, one of many they are protecting nationwide and in Oklahoma. We interviewed Bob Hamilton, director of the Tallgrass Prairie Preserve and Chris Hise, director of the Four Canyons Preserve both of whom emphasized how they preserve and restore the ecosystems of the preserves and also reach out to the neighbors to help them learn how to take part in the sustainability on their properties and educate them about how that can be achieved. Showing how that can be achieved on the preserves is much more potent for reaching out than lecturing or telling.
http://en.wikipedia.org/wiki/Tallgrass_Prairie_Preserve
The Tallgrass Prairie Preserve, located in Osage County, Oklahoma near Foraker, Oklahoma, is owned and managed by The Nature Conservancy. It is protected as the largest tract of remaining tallgrass prairie in the world. The preserve contains 39,000 acres (160 km2) owned by the Conservancy and another 6,000 acres (24 km2) leased in what was the original tallgrass region of the Great Plains that stretched from Texas to Manitoba
Description
The preserve is located at the southern end of the Flint Hills, a rocky, rolling prairie that stretches from northern Kansas into Oklahoma. Exposed limestone formations and those close to the surface have made cultivation difficult and thus the Flint Hills have survived much as they were when they were an Indian hunting ground for tribes such as the Wichita, Osage, and Kaw. The region is called “The Osage” by Oklahomans, referring to the name of the county and the Indian tribe to which the land belonged. Pilots call The Osage the “Black Hole” when flying over it at night because it is so lightly populated.[2]
Prior to its purchase by the Nature Conservancy in 1989, the preserve was called the Barnard Ranch which had been part of the Chapman-Barnard ranch of 100,000 acres (400 km2).[3] The foreman of the Chapman-Barnard ranch, Ben Johnson, Sr. was a rodeo champion. His son, also a rodeo champion, was Ben Johnson, Jr. who appeared in more than 300 movies and won an Oscar for his role in “The Last Picture Show.”[4]
The preserve is bisected by well-timbered Salt Creek and its tributaries. The eastern portion of the preserve is in the Cross Timbers, a north-south running belt of tangled oak forests that were a major impediment to early travelers heading west.[5] About 10 percent of the preserve is forested and the remainder is tallgrass prairie with grasses of several species that can grow ten feet tall.[6]
The tallgrass prairie owes its existence to fire, whether caused by lightening or manmade. Without fire, the prairie quickly becomes brushland. The Indians were aware of this and burned the prairie regularly to nurture new growth of succulent grasses and to kill intrusive trees and shrubs. The Nature Conservancy has continued this practice with a process called “patch burning” in which about one-third of the prairie is burned each year. This process has proven beneficial not only for bison and cattle, but also for the threatened Greater Prairie Chickens which also inhabit the preserve in small numbers.
Bison are the most prominent attraction of the preserve. The herd numbers more than 2,500 and grazes 21,000 acres (85 km2) of mostly open range. Bison are rounded up each fall and the excess numbers sold. Cattle are grazed on 11,000 acres (45 km2). The preserve supports 755 plant species, many unique to the tallgrass prairie, and more than 300 bird species.[7] Forest trees include several species of oak, cottonwoods, ash, red cedar, elm, sycamore, and others.
The Tallgrass Prairie Preserve is on the Osage Indian Reservation. The Osage Indians retained sub-surface mineral rights on all their former lands and the petroleum on their reservation made them the richest people per capita in the world in the 1930s. There are still more than 100 producing oil wells on the preserve. Bison graze unhindered among the oil wells.[8]
Posted by Fran Hardy at 10:11 AM