Treebeard lives in the Tallgrass Prairie 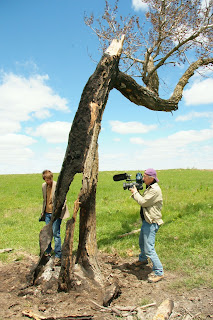 When we interviewed Bob Hamilton, director of the Nature Conservancy's Tallgrass Prairie Preserve he told us to keep an eye out for an old cottonwood which had had the core of it burnt out in one of their controlled burns. He called it Treebeard after the character of the walking tree in the Two Towers. Just yesterday someone told me the Ents would like my tree paintings, also from the Two Towers movie based on the Tolkein books. I never saw the movies because my father who shared with me his great love of reading read me the Hobbit and the rest of the series when I was preschool age before they became famous. I drew my own illustrations to put into the book as the original series of books had no illustrations. I didn't want to see the movies because I wanted to preserve in my mind those childhood images of my imagining and the impact they had on me and my fantasy life.
Anyway I shot lots of reference and Treebeard will definitely be one of my tree paintings. I am going to include my interpretations and impressions of the Nature Conservancy preserves we visited in Oklahoma in the exhibition at the Mabee-Gerrer Museum of Art in conjunction with our documentary. 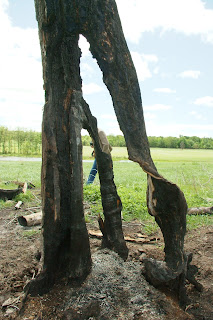 I was just talking with Mike Fuhr, Oklahoma State Director of the Nature Conservancy about how important controlled burns are to maintaining a variety of habitats and that they were a vital part of the natural cycle before we began to heavily populate parts of the country that need burns to maintain their ecological integrity. A lot of the public does not realize how important they are. Right now we are getting lots of smoke in Santa Fe and other parts of New Mexico from the huge Wallow Fire in Arizona which has become the largest wildfire in the history of Arizona and is now threatening New Mexico.
Controlled burns could have made a huge difference in the severity of this fire. We had a controlled burn  in the Santa Fe Forest last summer and there was a lot of  public complaint about the two days of smoke but without these kinds of burns we could have a fire like the Wallow Fire especially with our drought conditions. The smoke we have endured from the Wallow Fire has been much worse and more extended. Mike Fuhr was also telling me how the management of controlled burns is a real art and needs to be done very differently in each unique ecosystem. I had never realized that the prairie needs to burn periodically or it will go from grassland to forest. Actually the soil at the Tallgrass looked quite dark and rich and there are very large trees in the ravines. 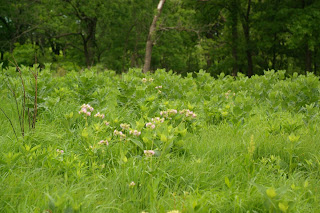 Tallgrass in spring with forest ravine and creek in background 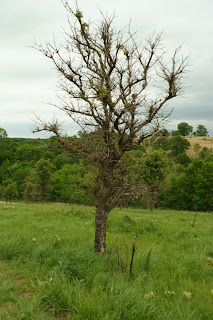 Here is a forest ravine in background and a windswept oak on a hilltop. I believe this is a post or blackjack oak and the ones on this hilltop were very twisted. That will need to be painting also as I love the gnarly and enduring trees. I suppose wind has taken it's toll and also fire.
It had just rained before we got to the Tallgrass but they had been having a drought so the grasses were not as tall as usual for the spring and we did see some gorgeous wildflowers but there would have been more. It is in the fall when the grasses become seven feet tall and we are definitely going back to see them. 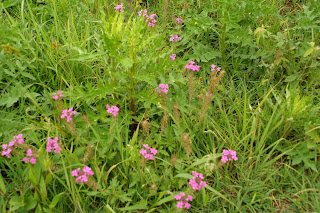 http://www.nature.org/ourinitiatives/regions/northamerica/unitedstates/oklahoma/placesweprotect/tallgrass-prairie-preserve.xml
To learn more about this Nature Conservancy Preserve go to the above link.
The Tallgrass Prairie Preserve is the largest protected remnant of tallgrass prairie left on earth. Originally spanning portions of 14 states from Texas to Minnesota, urban sprawl and conversion to cropland have left less than 10% of this magnificent American landscape. Since 1989, the Conservancy has proven successful at restoring this fully-functioning portion of the tallgrass prairie ecosystem with the use of about 2500 free-roaming bison and a "patch-burn" model approach to prescribed burning.
http://en.wikipedia.org/wiki/Tallgrass_prairie
The tallgrass prairie is an ecosystem native to central North America, with fire as its primary periodic disturbance. In the past, tallgrass prairies covered a large portion of the American Midwest, just east of the Great Plains, and portions of the Canadian Prairies. They flourished in areas with rich loess soils and moderate rainfall of around 760 to 890 mm (30 to 35 in) per year. To the east were the fire-maintained eastern savannas. In the northeast, where fire was infrequent and periodic windthrowrepresented the main source of disturbance, beech-maple forests dominated. In contrast, shortgrass prairie was typical in the western Great Plains, where rainfall is less frequent and soils are less fertile.
As its name suggests, the most obvious features of the tallgrass prairie are tall grasses, such as indiangrass (Sorghastrum nutans), big bluestem (Andropogon gerardii), little bluestem (Schizachyrium scoparium), and switchgrass (Panicum virgatum), which average between 1.5 and 2 m (4.9 and 6.6 ft) tall, with occasional stalks as high as 2.5 to 3 m (8.2 to 9.8 ft). Prairies also include a large percentage of forbs, such as lead plant (Amorpha spp.), prairie rosinweed (Silphium terebinthinaceum), and coneflowers.
The tallgrass prairie biome depends upon prairie fires, a form of wildfire, for its survival and renewal.[1] Tree seedlings and intrusive alien species without fire-tolerance are eliminated by periodic fires. Such fires may either be set by humans (for example, Native Americans used fires to drive bison and improve hunting, travel, and visibility) or started naturally by lightning. Researchers' attempts to re-establish small sections of tallgrass prairie in arboretum fashion were unsuccessful until they began to use controlled burns.
Technically, prairies have less than 5-11%[clarification needed] tree cover[citation needed]. A grass-dominated plant community with 10-49% tree cover is a savanna.
Due to accumulation of loess and organic matter, parts of the North American tallgrass prairie had the deepest topsoil recorded. After the steel plough was invented by John Deere, this fertile soil became one of America's most important resources. Over 99% of the original tallgrass prairie is now farmland.
The tallgrass prairie survives in areas unsuited to ploughing: the rocky hill country of the Flint Hills, which run north to south through east-central Kansas; the eastern fringe of the Red River Valley (Tallgrass Aspen Parkland) in Manitoba and Minnesota; the Coteau des Prairies, which extends from South Dakota through Minnesota and into Iowa; and the far north portion of Oklahoma. In Oklahoma, the tallgrass prairie has been maintained by ranchers, who saw the hat-high grass as prime grazing area forcattle.
The 158 km2 (39,000-acre) Tallgrass Prairie Preserve in Osage County, Oklahoma, and the somewhat smaller 44.1 km2 (10,900-acre) Tallgrass Prairie National Preservein Kansas, attempt to maintain this ecosystem in its natural form. They have reintroduced Plains Bison to the vast expanses of grass.[1] Other U.S. preserves includeMidewin National Tallgrass Prairie in Illinois, Broken Kettle Preserve and Neal Smith National Wildlife Refuge in Iowa, Konza Prairie in Kansas, and Prairie State Park in Missouri. In eastern North Dakota is Sheyenne National Grassland, the only National Grassland on the tallgrass prairie. There are also several small tall grass prairie reservations in Cook County, Illinois, including the National Natural Landmark, Gensburg-Markham Prairie.[2]