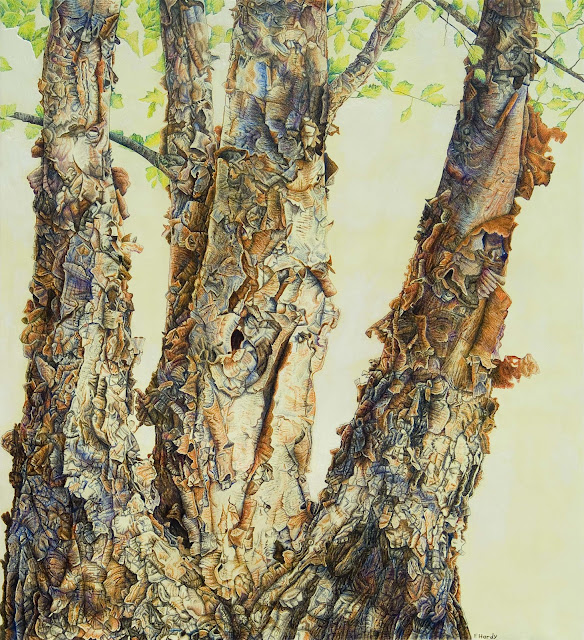 These are some of the trees that will be in the exhibition I am curating at the Mabee-Gerrer Museum of Art which will also include the work of the artists we interviewed for the our documentary " Earth Chronicles Project, The Artist's Process: Oklahoma". The documentary will be airing on OETA, Oklahoma PBS September 13, 2012 at 7 pm. Make sure to tune in and tell all your friends. We show you special places you may never have envisioned and individuals who are passionate about the art, and saving the unique ecology and culture in Oklahoma. It is actually one of the more diverse states in terms of various ecosystems. The exhibition at the Mabee-Gerrer Museum of Art will open the following day on September 14 with a reception at 7 pm and continue until October 28th.

This wonderful river birch pictured above was in the 60 acre preserve of Quintus Herron in Idabel Oklahoma. I was intrigued by the wonderful papery peeling bark. Look closely and you will see the faces of tree sprites hidden in the bark. I got so lost in all the detail I was afraid it would not come together but I was pleased after bringing in the shadows how it all came together.

Another wonderfully textured tree with amazing bark is the sycamore tree which loves the moisture of creek and river bottoms in Oklahoma. 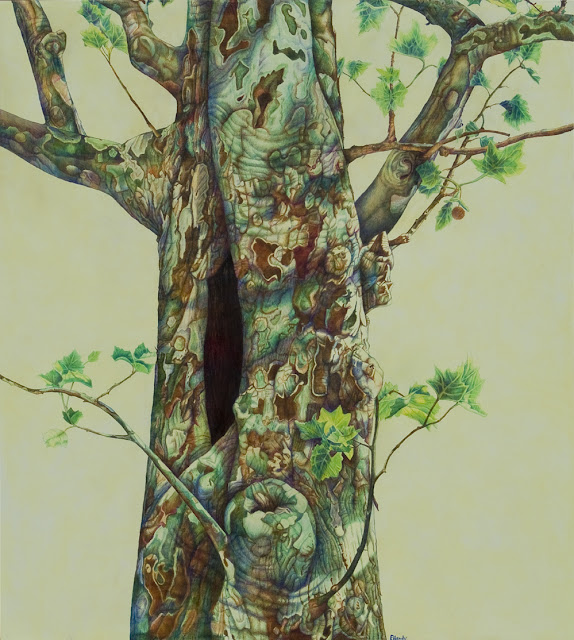 Apparently they can tolerate the periodic flooding of these river bottoms and many old trees have survived because they were not optimal for lumber. This piece will become part of the permanent collection of the Mabee-Gerrer Museum of Art. Tahlequah is near a beautiful stretch of the Illinois River which is endangered by poultry run-off up stream in Arkansas. Kim Baker, conservation photographer is trying to bring increased attention to the need to protect this river through her Illinois Survey which we documented for our program. I knew the river was impacted when I read not to get into the water with open sores, cuts etc. Being an avid swimmer this degradation of our waters is very distressing to me.

More trees in the next blog post and yes we have begun shooting "Earth Chronicles Project, The Artist's Process: New Mexico" with a grant from the New Mexico Arts Council and I will be blogging about our fascinating interviews and the locations we have visited thus far. I am way behind on my blogging as we are overwhelmed with getting ready for the Oklahoma show, close captioning and mastering the documentary for PBS, and beginning on the New Mexico project. Trying to juggle scheduling and getting everything done on time. We will try not to have our projects overlap next time.
It is all an intense learning process. Bob and I have the combined skills to do all of this but we tend to take on huge commitments.

http://en.wikipedia.org/wiki/Betula_nigra
Betula nigra (River Birch; also occasionally called Water Birch) is a species of birch native to the eastern United States from New Hampshire west to southern Minnesota, and south to northern Florida and west Texas. It is commonly found in flood plains and/orswamps.[1] It is a deciduous tree growing to 25 m (80 ft), rarely to 30 m (100 ft), high with a trunk up to 50 cm (2 ft), rarely 150 cm (5 ft), diameter, often with multiple trunks. The bark is variable, usually dark gray-brown to pinkish-brown and scaly, but in some individuals, smooth and creamy pinkish-white, exfoliating in curly papery sheets. The twigs are glabrous or thinly hairy, and odorless when scraped. Theleaves are alternate, ovate, 4–8 cm (1.5–3 in) long and 3–6 cm (1.2–2.4 in) broad, with a serrated margin and five to twelve pairs of veins. The flowers are wind-pollinated catkins 3–6 cm (1.2–2.4 in) long, the male catkins pendulous, the female catkins erect. The fruit is unusual among birches in maturing in late spring; it is composed of numerous tiny winged seeds packed between the catkin bracts.[1][2]


Native Americans used the boiled sap as a sweetener similar to maple syrup, and the inner bark as a survival food. It is usually too contorted and knotty to be of value as a timber tree.[3]

http://en.wikipedia.org/wiki/Sycamore
http://en.wikipedia.org/wiki/Platanus_occidentalis
Platanus occidentalis, also known as American Sycamore, American planetree, Occidental plane, and Buttonwood, is one of the species of Platanus native to North America. It is usually called Sycamore in North America, a name which can refer to other types of tree in other parts of the world.

An American sycamore tree can often be easily distinguished from other trees by its mottled exfoliating bark, which flakes off in great irregular masses, leaving the surface mottled, and greenish-white, gray and brown. The bark of all trees has to yield to a growing trunk by stretching, splitting, or infilling; the Sycamore shows the process more openly than many other trees. The explanation is found in the rigid texture of the bark tissue, which lacks the elasticity of the bark of some other trees, so it is incapable of stretching to accommodate the growth of the wood underneath and the tree sloughs it off.[1]
A sycamore can grow to massive proportions, typically reaching up to 30 to 40 meters (98 to 130 ft) high and 1.5 to 2 meters (4.9 to 6.6 ft) in diameter when grown in deep soils. The largest of the species have been measured to 51 meters (167 ft), and nearly 4 meters (13 ft) in diameter. Larger specimens were recorded in historical times. In 1770, near the junction of the Kanawha and Ohio Rivers, George Washington recorded in his journal a sycamore measuring nearly 45 feet (14 m) in circumference at 3 feet (91 cm) from the ground.[2]
The sycamore tree is often divided near the ground into several secondary trunks, very free from branches. Spreading limbs at the top make an irregular, open head. Roots are fibrous. The trunks of large trees are often hollow.
Another peculiarity is the way the leaves grow sticky, green buds. In early August, most trees in general will have—nestled in the axils of their leaves—the tiny forming bud which will produce the leaves of the coming year. The sycamore branch apparently has no such buds. Instead there is an enlargement of the petiole which encloses the bud in a tight-fit.

Posted by Fran Hardy at 1:10 AM No comments: