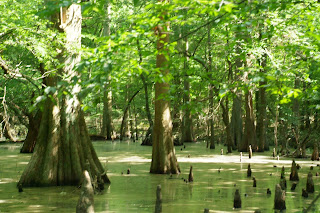 If you go back to previous posts you can read about our trip guided by Dave Weaver, Manager of Little River Wildlife Refuge in Broken Bow, OK to a cypress swamp in the midst of dense forests containing 11 champion trees of Oklahoma. In this swamp is a huge champion bald cypress.
http://www.fws.gov/southwest/refuges/oklahoma/littleriver/index.html
Established in 1987, Little River National Wildlife Refuge is one of more than 530 refuges throughout the United States managed by the Fish and Wildlife Service. The National Wildlife Refuge System is the only national system of lands dedicated to conserving our wildlife heritage for people today and for generations yet to come. Little River National Wildlife Refuges' primary purpose is to preserve the bottomland hardwood forests for migratory waterfowl on the Central Flyway. Visitors to this 15,000-acre refuge, tucked in the southeast corner of Oklahoma, step into an era before civilization. Flocks of mallards and wood ducks glide along the sloughs and oxbows of Litte River past the flared trunks ofcypress trees. Listen to the croaks and whistles of many frogs. You may also see alligators. 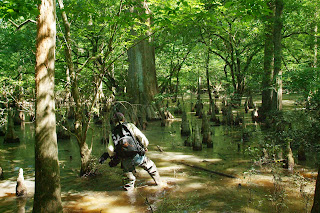 Dave brought hip waders and wellies for us to walk into the swamp while he braved the mosquitos on the shore. For some reason they bite less when you are wading in the swamp. I had the wellies so I had to stay in the shallower edges, but Bob went deep into the swamp with the hip waders and got incredible footage of this magical place. 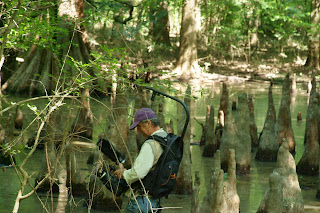 At first it was intimidating to walk into the swamp but then as one waded in, it became a thrilling experience. For some reason Bob's wide angle lens had already gotten moisture between the lenses and was not usable and he wished he had it for this footage. Maybe it was just from coming from the dryness of New Mexico to the dampness of south eastern Oklahoma. We don't know. It has dried out but now there are water spots so he will have to send it out to be taken apart and cleaned. 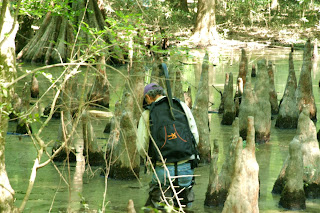 The sounds, the colors in the water and the champion bald cypress were awesome.
http://www.americanforests.org/resources/bigtrees/
American Forests' National Big Tree Program is a conservation movement to locate, save, and protect the biggest tree species in the United States. For more than 70 years the goal of the Big Tree Program has been the same â€“ to preserve and promote the iconic stature of these living monarchs. It is a major feat for trees to survive disease and pests, the forces of nature, and mistreatment from humans, but Big Trees are universal symbols of what a tree looks like when they are properly cared for and allowed to live a full life.
The National Register of Big Trees is the official publication that recognizes more than 800 of the largest native and naturalized tree species in the United States. Adding a tree to the Register becomes a contest among tree enthusiasts to find the biggest of each species and have it crowned as the national champion. Not every tree is the strongest, prettiest, or most popular tree, but they are in every respect a champion for the environment.
http://en.wikipedia.org/wiki/Tree

The world's champion trees can be rated on height, trunk diameter or girth, total size, and age.
As Bob panned across the surface of the swamp he accidently touched just a corner of his camera with the water. The camera shut down and he was afraid he had shorted it out. Suddenly a magical day became extremely stressful and we were both very quiet. Bob was thinking about going up to Oklahoma City to rent a camera and finish our shoots and that his camera might be ruined and I was just praying that once it was dry it would come back on. The ride back to Idabel was very quiet and when we got to the motel Bob began to use the hair dryer on the camera. Luckily after he broke that piece of plastic that covered the record light in the Wichita Mountains he covered it with gaffer's tape or that would have been the end of the camera. After it was dry he turned the camera back on and luck, oh luck it was only a damp battery connection that shut down the camera. This kind of stress and equipment challenge is par for the course but it never fails to create panic. I didn't use to understand why Bob would come back in such an intense mood after a shoot until we started working together. 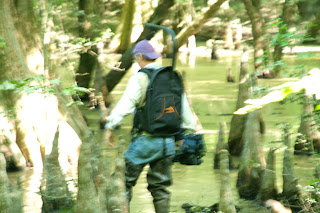 I called Dave Weaver the next day to tell him that the camera was working and to thank him for taking us to such a spectacular place as we were both very silent and stressed at the end of the previous day and we certainly appreciated his time and information.