I grew up in New Jersey where summer meant tomatoes that were deep red and dripping with tasty red juice.
We grew them in the backyard but luscious tomatoes were also available from a local farmer who came around with his produce.
This morning on Fresh Air, Terry Gross interviewed Barry Estabrook, former contributing editor of Gourmet magazine about his new book, Tomatoland: How Modern Industrial Agriculture Destroyed Our Most Alluring Fruit. This link will take you to an article about the interview and the book as well as being able to hear this excellent interview online.
http://www.npr.org/2011/06/28/137371975/how-industrial-farming-destroyed-the-tasty-tomato
This link with excerpts from the interview with Barry Estabrook also talks about the huge toll on migrant workers and what the tomato growers are up against. It really shows how our food growing and delivery system has to change and how we the consumer need to vote with how we shop and by eating local and in-season.

A big part of the problem is our expectation that we can have tomatoes year round and many younger people do not even know how a tomato should taste. We have become used to a sort of styrofoam texture and bland tastelessness. I used to have my own organic garden in Pennsylvania and  friends who visited would leave with shopping bags full of fresh produce. We canned, we dried and we ate the fresh vegetables and fruit with loving abandon. I had forgotten that fabulous medley of taste delight until we started going to the Santa Fe Farmer's Market and had freshly picked, naturally grown produce again. What a difference and how quickly we forget in this mass produced market.
Barry also writes a blog. http://politicsoftheplate.com/
Excerpts from "Tomatoland" on the NPR website:

If you bite into a tomato between the months of October to June, chances are that tomato came from Florida. The Sunshine State accounts for one third of all fresh tomatoes produced in the United States — and virtually all of the tomatoes raised during the fall and winter seasons.
But the tomatoes grown in Florida differ dramatically from the red garden varieties you might grow in your backyard. They're bred to be perfectly formed — so that they can make their way across the U.S. and onto your dinner table without cracking or breaking.
"For the last 50 or more years, tomato breeders have concentrated essentially on one thing and that is yield — they want plants that yield as many or as much as possible," writer Barry Estabrook, tells Fresh Air's Terry Gross. "They also want those fruits to be able to stand up to being harvested, packed, artificially turned orange [with ethylene gas] and then shipped away and still be holding together in the supermarket a week or 10 days later."

Estabrook, a freelance food writer whose work has appeared in The Atlantic, The New York Times and The Washington Post, looks at the life of today's mass-produced tomato — and the environmental and human costs of the tomato industry — in his book Tomatoland: How Modern Industrial Agriculture Destroyed Our Most Alluring Fruit. The book was based on a James Beard award-winning article which originally appeared in Gourmet Magazine, where Estabrook was a contributing editor before publication ceased in 2009.
Estabrook says the mass-produced tomatoes in today's supermarkets lack flavor because they were bred for enduring long journeys to the supermarket — and not for taste.
"As one large Florida farmer said, 'I don't get paid a single cent for flavor,'" says Estabrook. "He said, 'I get paid for weight. And I don't know of any supermarket shopper who tastes her tomatoes before she puts them in her shopping cart.' ... It's not worth commercial plant breeders while to breed for taste because their customers — the large farmers — don't get paid for it."
As a result, customers have become accustomed to the flavorless tomatoes that dot supermarket shelves, says Estabrook.
"I was speaking to a person in their 30s recently and she said she had never recalled tasting anything other than a supermarket tomato," he says. "I think that wanting a tomato in the winter of winter — or wanting a little bit of orange on the plate ... is inherent in a lot of our shopping decisions. We expect an ingredient to be on the supermarket shelves 365 days a year, whether or whether not it's in season or tastes any good."
Let's Call The Whole Thing Off?
Though most of our tomatoes come from Florida, the state isn't necessarily the best place to grow the crop, says Estabrook. Most tomatoes are grown in sand, which contains few nutrients and organic materials. In addition, Florida's humidity breeds large populations of insects, which means tomato growers need to apply chemical pesticides on a weekly basis.

Trent Campbell
Barry Estabrook is a former contributing editor atGourmet magazine. He currently blogs atpoliticsoftheplate.com.
"In order to get a successful crop of tomatoes, the official Florida handbook for tomato growers lists 110 different fungicides, pesticides and herbicides that can be applied to a tomato field over the course of the growing season," he says. "And many of those are what the Pesticide Action Network calls 'bad actors' — they're kind of the worst of the worst in the agricultural chemical arsenal."
Florida applies more than eight times the amount of pesticide and herbicides as California, the next leading tomato grower in the country. Part of this has to do with the fact that California processes tomatoes that are used for canning — and therefore don't have to look as good as their Florida counterparts. But part of this also has to do with consumers.
"It's the price we pay for insisting we have food out of season and not local," he says. "We foodies and people in the sustainable food movement chant these mantras 'local, seasonable, organic, fair-trade, sustainable' and they almost become meaningless because they're said so often and you see them in so many places. If you strip all those away, they do mean something, and what they mean is that you end up with something like a Florida tomato in the winter — which is tasteless."
by BARRY ESTABROOK 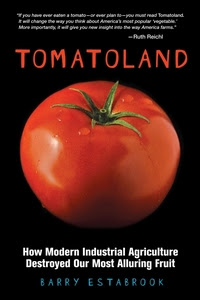