Tree Spirits or the Sentient Life of Trees

Devon Jackson, editor of the Santa Fean magazine wrote one of my favorite articles on my paintings and drawings of trees. He really understood what I was trying to say and expressed it so well. It was in the December/January 2010 issue of the magazine. I did a series of drawings which while full of fantasy and magic were still within the realm of the 'real' and then did a spirit version of each tree which was abstracted and represented the inner ancient spirit. Here is the article and some of the trees. 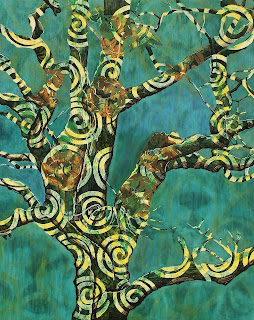 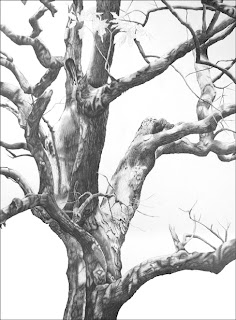 Keystone Ancient Forest by Fran Hardy copyright
graphite on panel, 60" x 48"
Sentience by Devon Jackson
Fran Hardy has a memory from her childhood that, if you think about it- if you sit with it, study it, let it sink in, the way you would with any of her paintings-pretty much encapsulates the entirety of her art. I remember this image of my grandmother holding this vegetable in her hand and telling me "Isn't this beautiful?" recalls Hardy, here in the home she shares with her husband, freelance television producer Bob Demboski, just outside Santa Fe.
If you really picture that image, and you let your imagination move in closer and closer on her grandmother's skin and the skin of that vegetable, until the colors and the lines of the one begin to intersect and commingle with the lines and colors of the other, and the one has suddenly become as alive and vibrant as the other,  you're then seeing what Hardy sees, you're seeing the world as she sees it, remembers it, and so wonderfully and dynamically depicts it in her bold finely rendered still lifes.
"I don't want to depict what's there; I want more," says Hardy, who was raised in New Jersey by parents who worked as scientists. "I want my paintings to be more. Because when I look at nature there is so much more going on. There's a microscopic world within a world. But we look at things one way and tend to think that they are only that way-when they are not."
"A lot of what happens on this plane is an illusion and can shift at any moment," adds Hardy. "I'm a very spiritual person." For instance she sees plants as sentient beings. Not that she doesn't eat her fruits and vegetables, just that she recognizes their ability to feel.
Which goes back to the impact of that memory of her grandmother holding the vegetable-and ahead to her career as an artist. Relocating at first to a 51 acre Pennsylvania farm, then to Florida, where that grandmother of hers left such an indelible impression, Hardy looked to nature as inspiration, and turned out one stunning still life after another. Working from sketches and photographs, sometimes on panel, sometimes on paper, she eventually finds a midpoint between realism and the semi-abstract. "If you look closely at anything," she says, "you find that everything has a lot of abstraction in it."
Hardy is meticulous to the point of almost being obsessive, and it's one of her great talents. "I like fine lines," she says. "I like to get lost in detail." Since moving here five years ago, her penchant for fine lines has met its match. "New Mexico is so diverse, it's endless," she marvels. The junipers offer as much stimulation as the staghorn ferns she popularized earlier in her career. "I love the aberrations and the individuality and the spirituality of what's happened in a tree's lifetime," says Hardy. "Trees have always been important. They preserve our biosphere."
Fond of finding beautiful things in odd places- a yucca plant in front of a St. Michael's  gas station, an interesting tree on Cerrillos- Hardy avoids the man-made, focusing instead on nature, on objects society doesn't consider sentient. "It's really focusing on the purity-maybe it's my way of surviving, too,"  she muses. "By not paying attention to Walmart and fast-food restaurants and all that. Instead it will be the plant I'll focus on. I'm not a total Luddite, but I want to see us encourage more space to things I think deserve the space. Because if we're all tuned in, there's a lot of intuitive that's probably more significant than the cognitive."
It's why she tends to supersize her subjects. "When you look at things larger than life, it makes you look at things much more closely. People may think something is beautiful but they won't mull over it if it is small. But when it's bigger they really look. It makes them look. I take something out of its normal frame of reference and make you really look at it." 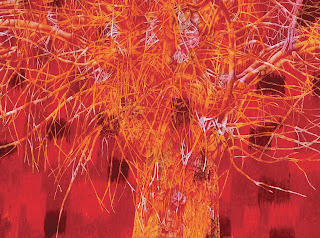 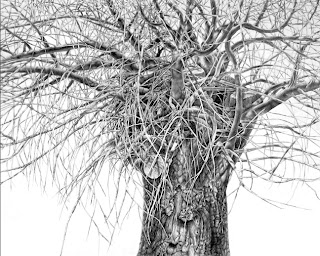