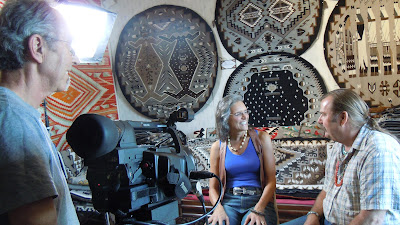 Mark and Linda Winters graciously put us up at Toadlena Trading Post and Museum in Toadlena, New Mexico while we shot a segment on them and their work with the highly respected Navajo weavers of the Two Grey Hills. I highly recommend a visit to this historic trading post. Not only will you see an active trading post but the weavings of the Toadlena/Two Grey Hills are famous for the their beauty and their finely spun and woven craftsmanship and design. The weavers of the Two Grey Hills are held in high esteem for achieving a standard that others strive to reach. Mark and Linda put in long and demanding hours promoting not only the master weavings of deceased weavers but also the up and coming generations and help them to sell their weavings at prices these exquisite weavings richly deserve so that the weavers of Toadlena/Two Grey Hills can continue their tradition and make much deserved income. 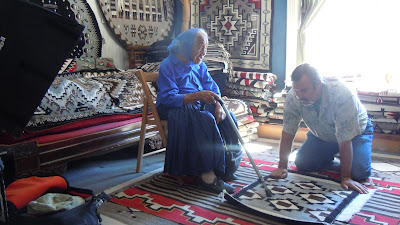 One of the beautiful grandmothers came in with a weaving she had just completed to show Mark. He purchases their weavings for sale at the trading post and documents each one with a photograph of them with their weaving that they take home as well as him maintaining a record.
More about some of the weavers in my next blogpost. Mark keeps extensive records of all the weavings and their lineage from the different families of the Toadlena/Two Grey Hills. He has written a voluminous book which he spent over 23 years on as an amazing labor of love, that chronicles the history and shows an extensive record of the weavers starting with Navajo grandmothers, some of whom have passed on and those still living and the legacy of weaving that continues with their descendants. Here is more information on the book and how to buy it.
http://www.toadlenatradingpost.com/cgi-bin/dada/mail.cgi/archive/toadlena/20110804161031/

I also highly recommend a trip to the trading post where you can purchase the book and see and purchase the weavings in person. They also mount shows in the museum attached to the post. Not only is the post full of the wonderful weavings of the Toadlena/Two Grey Hills but it is also a vital trading post that sells food and other necessities to the locals. On a busy day you will also see many of the weavers coming in to sell their latest weavings to the trading post or locals purchasing necessities.
The beautiful subtle palette of the weavings of the Toadlena/Two Grey Hills weavings come from  the undyed natural wool. Carding (combing or blending) various colors together creates additional shades broadening the range and palette of color. 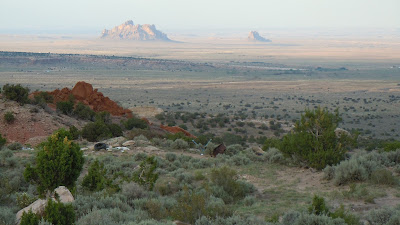 Stay tuned for more about our trip and shooting at Toadlena/Two Grey Hills and some of the weavers on upcoming blog posts.

http://www.toadlenatradingpost.com/
Toadlena Trading Post operates in the same way trading posts have since the 1870s—directly with the weaver and her family. You are offered the unique opportunity to acquire a textile of timeless beauty, acknowledged excellence and lasting value.
The Navajo weaver is following the “Path of Beauty” with a skill passed down from Spider Woman. We invite you to visit the Toadlena Trading Post in New Mexico or follow the progress of the weavers on our web site.

Posted by Fran Hardy at 1:44 PM No comments: 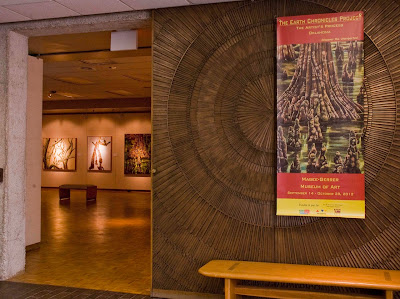 Entrance to the exhibition


Our exhibition 'Earth Chronicles Project, The Artist's Process: Oklahoma' opened September 14th and is running until October 28th at the Mabee-Gerrer Museum of Art in Shawnee, Oklahoma. http://www.mgmoa.org

Our documentary of the same name is still airing on Oklahoma PBS. The next airing is October 12th at 10am and 3 pm on their OKLA station.

Below is a visual walk through of the exhibit which contains artists interviewed in the documentary and an installation on the trees and native plants of Oklahoma by co-producer, curator and environmental artist, Fran Hardy. 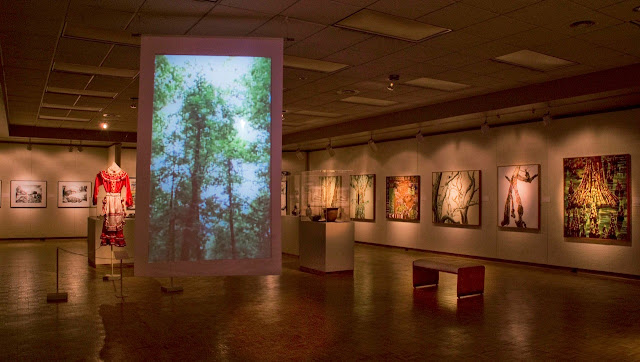 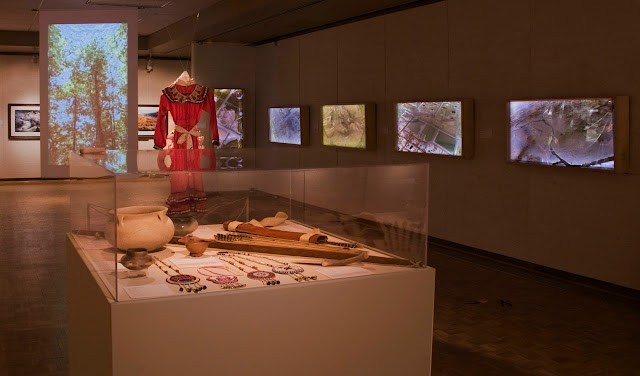 View of case containing Choctaw work by Dr. Ian Thompson and Sue Folsom with Grace Grothaus's work to the right 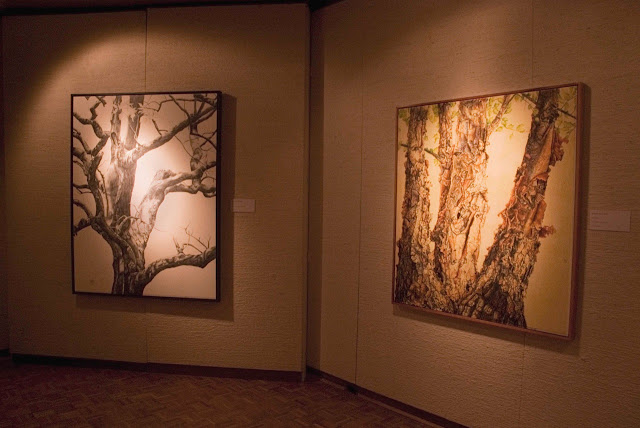 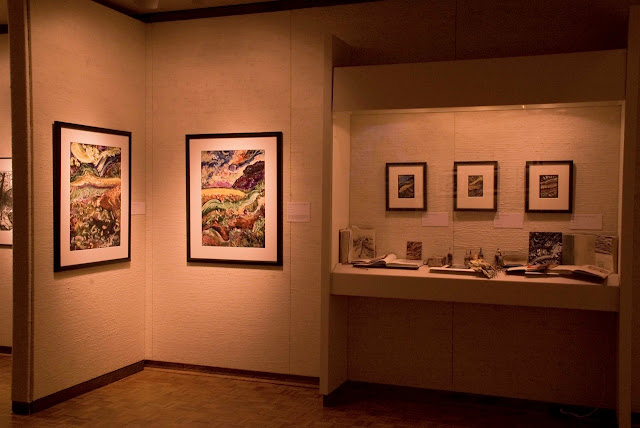 Jack Bryan's work with display of his painting and drawing tools 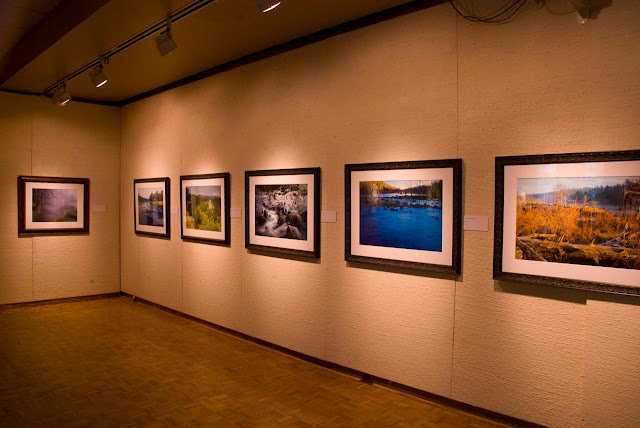 Kim Baker's photographs of rivers and waterways of Oklahoma 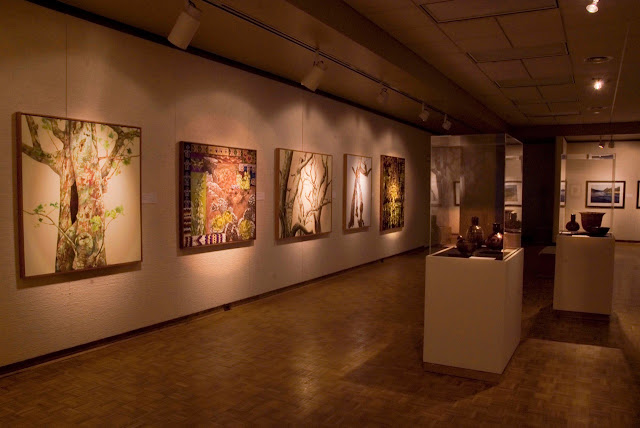 Some special places depicted in the exhibition:
http://en.wikipedia.org/wiki/Wichita_Mountains
The Wichita Mountains are located in the southwestern portion of the U.S. state of Oklahoma.[1] The mountains are a northwest-southeast trending series of rocky promontories, many capped by 540 million-year old granite. These were exposed and rounded by weathering during the Permian Period. The eastern end of the mountains offers 1,000 feet (305 m) of topographic relief in a region otherwise dominated by gently rolling grasslands.

Keystone Ancient Forest/Crosstimbers
http://www.nature.org/ourinitiatives/regions/northamerica/unitedstates/oklahoma/placesweprotect/keystone-ancient-forest-preserve.xml
For another day on top of the centuries that have come and gone, the winter trees of the Keystone Ancient Forest Preserve raise their twisted branches against whatever might come of this latest weather assault sweeping across Lake Keystone.
Ice? Fire? Drought? This ancient forest is made of tougher stuffthan most people know. These hard-crusted trees, some of them 300, 400, even 500 years old, stand as a sage army of post oaks and redcedars, undisturbed, unyielding, less than 15 miles from Tulsa, marking the gateway from the deciduous forests of the East to the prairies of the West.
Fortunately, the craggy terrain has left developers unwilling or unable to tackle the area. Some of these trees have had their tops knocked off by wind or broken by ice some time over the passing centuries. But they'd be here, lush in the spring, painted in the fall or bare in winter when visitors can see through the maze of branches over the high bluffs on windy days and watch cloud shadows chase sun streaks across the lake below.
The Illinois River which begins in Arkansas and extends into Oklahoma:


The Illinois River is a 145-mile-long (233 km)[1] tributary of the Arkansas River in the U.S. states of Arkansas and Oklahoma. The Osage Indians named it Ne-eng-wah-kon-dah, which translates as "Medicine Stone River." The state of Oklahoma has designated its portion as a Scenic River.

The Conservancy's Four Canyon Preserve encompasses 4,000 acres of mixed-grass prairie, rugged canyons, and floodplain along the Canadian River in southern Ellis County. Scenic prairie ridges traverse the landscape, dissected by deep chinquapin oak-lined canyons draining to the river. These prairies provide habitat for a number of rare grassland birds, such as Cassin's sparrow and Swainson's hawk, and additional species of concern including reptiles like the Texas horned lizard, as well as numerous state-rare plants. The cool, wooded canyons stand in contrast to the surrounding prairies, and provide habitat for birds like red-bellied woodpecker and painted bunting. The Canadian River on the preserve provides habitat for the federally endangered least tern, the threatened Arkansas River shiner, as well as stopover habitat for migratory shorebirds including the sandhill crane.

Tallgrass Prairie:
http://en.wikipedia.org/wiki/Tallgrass_Prairie_Preserve
The Tallgrass Prairie Preserve, located in Osage County, Oklahoma near Foraker, Oklahoma, is owned and managed by The Nature Conservancy. It is protected as the largest tract of remaining tallgrass prairie in the world. The preserve contains 39,000 acres (160 km2) owned by the Conservancy and another 6,000 acres (24 km2) leased in what was the original tallgrass region of the Great Plains that stretched from Texas to Manitoba.
http://www.nature.org/ourinitiatives/regions/northamerica/unitedstates/oklahoma/placesweprotect/tallgrass-prairie-preserve.xml
The Tallgrass Prairie Preserve is the largest protected remnant of tallgrass prairie left on earth. Originally spanning portions of 14 states from Texas to Minnesota, urban sprawl and conversion to cropland have left less than 10% of this magnificent American landscape. Since 1989, the Conservancy has proven successful at restoring this fully-functioning portion of the tallgrass prairie ecosystem with the use of about 2500 free-roaming bison and a "patch-burn" model approach to prescribed burning.

Posted by Fran Hardy at 7:02 PM No comments: