In the culmination of an enormous amount of work on our part as well as the museum, our Earth Chronicles Project, The Artist's Process: Oklahoma, our exhibition of the artists interviewed in the documentary and an installation on the trees of Oklahoma by environmental artist, curator of the exhibit and co-producer, Fran Hardy opens at the Mabee-Gerrer Museum of Art in Shawnee, OK September 14th at 7pm. There will be a reception and many of the artists will be in attendance. You are invited to come. http://www.mgmoa.org/

The documentary on the art, ecological sustainability and cultural preservation in Oklahoma which drives the exhibition will be airing on OETA, Oklahoma PBS September 13 at 7pm and September 14 at 5am. Be prepared to see many places and people you may never have dreamed would have been in this far more diverse state than most people realize. http://www.oeta.tv/ 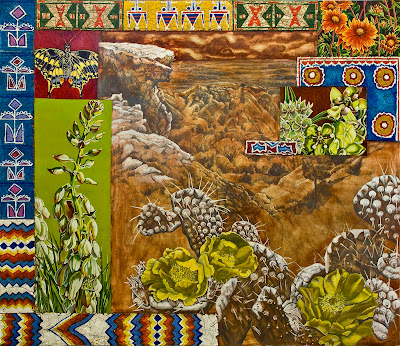 In a diversion from the rest of my pieces in the show this one celebrates the unique ecology and native plants of the Nature Conservancy's Four Canyon Preserve near Leedey, OK. Some of my pieces included in the exhibition, show trees that I discovered in other Nature Conservancy Preserves such as Treebeard Lives in the Tallgrass Prairie and Keystone Ancient Forest. http://www.franhardy.com

We have an exciting roster of artists in the show including Grace Grothaus and her synthetic landscapes utilizing modern technologies, Katherine Liontas-Warren and Jack Bryan who depict and celebrate in very different ways the rocky landscape of the Wichita Mountains, Jeri Redcorn, who revived the pottery tradition of her Caddo ancestors, Kim Baker, conservation photographer who uses her work to bring attention to the plight of Oklahoma waterways, Dr. Ian Thompson, Choctaw archaeologist and Sue Folsom who keep the Choctaw culture alive through their work based on traditional Choctaw pottery, beadwork and objects that have been used in their culture. All of these artists are innovative and masters of their craft as well as keeping important culture alive in Oklahoma while referencing what makes their state so unique and diverse.

Details from my painting Four Canyon that show you the various native plants, a vista from the preserve and patterns based on Kiowa-Apache beadwork and designs
copyright Fran Hardy 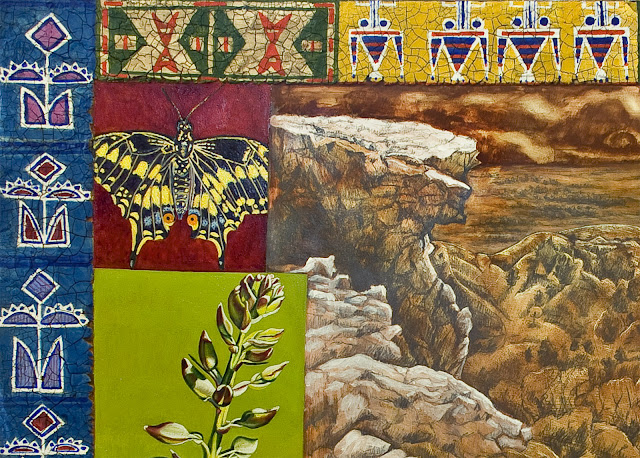 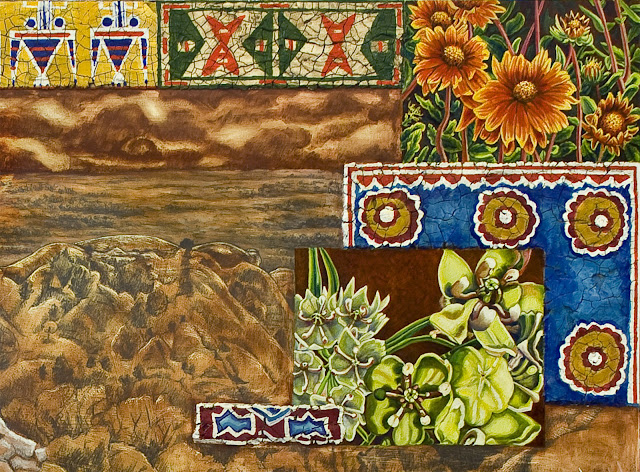 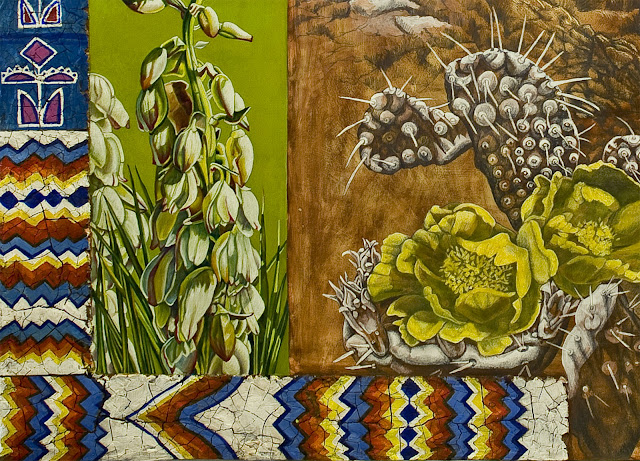 http://www.nature.org/ourinitiatives/regions/northamerica/unitedstates/oklahoma/placesweprotect/four-canyon-preserve.xml
The Conservancy's Four Canyon Preserve encompasses 4,000 acres of mixed-grass prairie, rugged canyons, and floodplain along the Canadian River in southern Ellis County. Scenic prairie ridges traverse the landscape, dissected by deep chinquapin oak-lined canyons draining to the river. These prairies provide habitat for a number of rare grassland birds, such as Cassin's sparrow and Swainson's hawk, and additional species of concern including reptiles like the Texas horned lizard, as well as numerous state-rare plants. The cool, wooded canyons stand in contrast to the surrounding prairies, and provide habitat for birds like red-bellied woodpecker and painted bunting. The Canadian River on the preserve provides habitat for the federally endangered least tern, the threatened Arkansas River shiner, as well as stopover habitat for migratory shorebirds including the sandhill crane.
Biodiversity Threats in the area include habitat fragmentation and loss, invasive plant species such as eastern redcedar, saltcedar, and old world bluestem, hydrologic alteration, and incompatible land management practices.
What the Conservancy is doing now will restore ecological function and integrity to this landscape. Following an initial rest period, prescribed fire will be used to control the spread of invasive eastern redcedar and to manage the habitat for wildlife. Efforts are underway to remove exotic plants such as old world bluestem from native prairie areas and to clear saltcedar from the Canadian River floodplain.
http://en.wikipedia.org/wiki/Plains_Apache
The Plains Apache are a Southern Athabaskan group that traditionally live on the Southern Plains of North America and today are centered in SouthwesternOklahoma. The tribe is federally recognized as the Apache Tribe of Oklahoma.

The Plains Apache are also known as the Kiowa Apache, Naʼisha, or Naishan Dene, meaning "Our People."[2] They also used the term Khat-tleen-deh or γát dìndé meaning "Cedar People" or Bay-ca-yeh meaning "Whetstone People". To their close allies, the much larger Kiowa tribe, although speaking a completely unrelated language, they were known as Semat meaning "Stealers." At major tribal events, the Kiowa Apache formed part of the Kiowa tribal 'hoop' (ring of tipis). This may explain why the Kiowa named the Kiowa-Apache Taugui meaning "Sitting Outside."[citation needed]

Today the tribe is headquartered in Anadarko, Oklahoma. Their tribal jurisdictional area covers parts of Caddo, Comanche, Cotton, Grady, Jefferson, Kiowa, andStephens Counties in Oklahoma. Their current tribal chairperson is Louis Maynahonah.[1]
Tribal members must have a minimum blood quantum of 1/8 Plains Apache descent to enroll in the tribe.[1]
In the late 18th century, Plains Apache lived near the upper Missouri River, their 1780 population was 400.[2] The Kiowa Apache adopted many traits from the Southern Plains lifestyle of the Kiowa, while remaining ethnically distinct. It is recorded that many Kiowa Apache did not learn the Kiowa language, preferring to communicate with their allies using the sophisticated Plains Indian Sign Language, at which the Kiowa were past masters (having probably devised much of the system). The Kiowa Apache social organisation was split into numerous extendend families (kustcrae), who camped together (for hunting, gathering) as local groups (gonka). The next level was the division or band, which was a composite of a some gonkas (especially for warfare).
In pre-reservation times there were at least four local groups or gonkas who frequently joined together for warring neighboring tribes and settlements.
The Kiowa Apache with their Kiowa allies agreed to settle on a reservation in southwestern Oklahoma. Some bands of Kiowas remained at large until 1875. Some of the Lipan Apache and Mescalero Apache bands with some Comanche in their company held out in northern Mexico until the early 1880s, when Mexican and U.S. Army forces drove them onto reservations or into extinction. By the Treaty of Medicine Lodge in 1867 the Kiowa and Kiowa Apache settled in Western Oklahoma and Kansas. They were forced to move south of the Washita River to the Red River and Western Oklahoma with the Comanche and the Kiowa. The reservation period lasted from 1868 to 1906. The transition from the free life of Plains people to a restricted life of the reservation was more difficult for some families than others.[6] The 1890 Census showed 1,598 Comanche at the Fort Sill reservation, which they shared with 1,140 Kiowa and 326 Kiowa Apache.[7]

Posted by Fran Hardy at 1:41 PM No comments: