Part Six of the challenges of documentary filmmaking: The Vanishing Hampton Inn Episode

At the end of long days of shooting one wants nothing more than to settle in at a motel with all the gear unpacked. Bob still has to download all the footage and I try to blog every night that we are on the road shooting, if the wi-fi or ethernet connections at the motels are working. That can be a challenge in and of itself. In one motel I had to perch the computer on the narrow windowsill in order to get enough signal to blog about our locations visited, people interviewed and various adventures of our day in the field.
We met Dr. Ian Thompson and his wife Amy in a little, to say the least, town called Brown, Oklahoma. The town as far as we could see consisted only of the one white church which we met them at. After shooting them gathering mussel shells at Lake Texacoma, they invited us out for a buffet dinner at the Choctaw Casino. You can read more about the mussels and the Choctaw pottery they are used for in previous blogs as well as seeing the firing process. 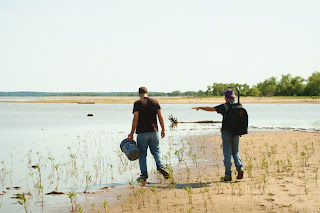 The buffet was great, fresh and extensive and we had a blast because they are both so much fun. I discovered that ranch dressing with guacamole on top of a salad was quite tasty (and slimming too I'm sure). Ian put the large delicious red strawberries in quantity on top of every one of his plates including one mounded with brussel sprouts, a most unique combo I thought. After at least four plates each plus a variety of desserts we were stuffed, very tired and ready for the Hampton Inn we had booked. We figured it was right near the casino, which was centrally located, but the GPS began taking us back out of town. The address was 3199 Shamrock Lane. GPS have started large family feuds for many people about whether to do what they say or not. In our case we had more trouble than usual with it in Oklahoma, altho in it's defense Bob realized that when we got back he had not gotten all the updates he thought he had. It can be a lifesaver and it can be a huge confusion "meister".
So we kept driving and driving wondering where on earth this Hampton Inn was as lights dwindled and we found ourselves in remote countryside. I began to realize we were driving back to Lake Texacoma. It kept telling us we were close, so suspending disbelief, we kept driving as the irritation in the van mounted. And then yes we came to Shamrock Lane in the middle of nowhere and the entrance to a ranch. Quite a few curse words were uttered by two tired co-producers but luckily the cell phone had reception and I called the Hampton Inn. The fellow at the desk said "Are you in the middle of nowhere?" "Yes we are." I said as Bob began to back the van around and with it being so dark and our windows tinted, he was repeatedly bashing into the Shamrock Lane sign and cursing repeatedly, all of which I'm sure was conveyed through the phone to the attendant at the Hampton Inn. I don't know what wreckage we left behind as it was so dark and yes the Hampton Inn was just minutes from the casino at least an hour and a half later, thank you. Apparently they have been trying to do something about this for ever by just changing the address number with resistance from zoning etc and calling the GPS makers to get them also to do something which some have. I asked how many people go to the wrong Shamrock Lane that use GPS....about 8 out of 10......
http://www.choctawcasinos.com/Durant.aspx
http://www.choctawnation.com/
http://en.wikipedia.org/wiki/Choctaw_Nation_of_Oklahoma
The Choctaw Nation of Oklahoma (commonly referred to as the Choctaw Nation) is a semi-autonomous Native American homeland comprising twelve tribal districts. The Choctaw Nation maintains a special relationship with both the United States and Oklahoma governments. Approximately 250,000 people live within the Choctaw Nation, of which 70,000 are enrolled Choctaw.
The chief of the Choctaw Nation is Gregory Eli Pyle. The Choctaw Nation Headquarters is located in Durant, Oklahoma, though the Choctaw Capitol Building is inTuskahoma, Oklahoma; it is now the Choctaw Museum and home to the Judicial Department Court System.
The Choctaw Nation is also home to a Native American group of Choctaws known as Oklahoma Choctaws. Choctaws, who elected to remove to what would be calledIndian territory between 1831 and 1838, were organized as the Choctaw Nation of Oklahoma. The removals continued until the early 20th century.[2] The removals became known as the "Trail of Tears."

The Choctaw Nation Headquarters in Durant. 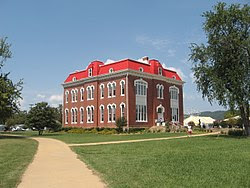 The historic Choctaw Capitol in Tushka Homma.
The Tribal Headquarters are located in Durant, Oklahoma, consisting of a complex of three 3-story buildings, and several one-story buildings. The current chief isGregory E. Pyle and the assistant chief is Gary Batton. The current number of Choctaw memberships is approximately 188,000.
The Tribe is governed by the Choctaw Nation Constitution which was ratified by the people on June 9, 1984. The Constitution provides for an Executive, a Legislative and a Judicial branch of government. The Chief of the Choctaw Tribe, elected every four years, is not a voting member of the Tribal Council. The legislative authority of the Tribe is vested in the Tribal Council, which consists of 12 members.