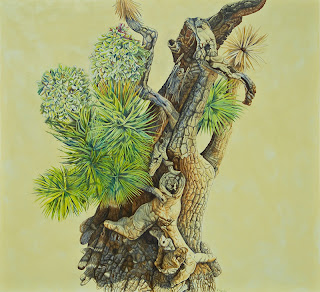 Joshua Tree from Above
Colored Pencil on Acrylic Ground on panel
fixed and varnished
42" x 48"
by Fran Hardy copyright
I am also going to blog about special spots and creative individuals we hope to interview in future Creative-Native Project documentaries and about my work on ancient trees.
Last March we discovered an ancient Joshua Tree forest in north western Arizona. We tried to time it for them to be in bloom and luckily we were successful. What a sight! Primordial.....
And how we happened to find that particular spot is a funny story. Years ago Bob's parents 'invested' in four lots near Meadville sight unseen. No one ever saw them and when both his parents passed on Bob and I being the closest decided to go find them. When I called the Assessor's  office in Kingman Arizona I found out that she gets similar call from all over the country. The land out there was platted but the communities were never built and many are way too far from any roads with nothing but open country in between. We pictured a barren desert but then doing some research I found out that the area was actually home to a huge Joshua Tree forest. Hence our endeavor to find them in bloom. We found their lots in the middle of nowhere although a rugged dirt road led to them from a paved road called Diamond Bar that leads to the south entrance to the Grand Canyon. They were at the foot of the spectacular Grand Wash Cliffs and covered with Joshua Trees in bloom. The blooms smell like hot wax and as you can see are succulent and beautifully waxy blooms. 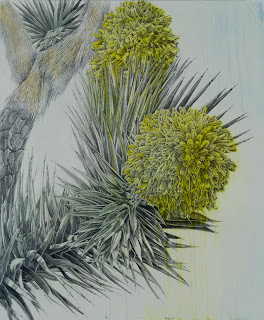 Joshua Tree Blooms, 36" x 30", watercolor and graphite on panel
fixed and varnished
by Fran Hardy copyright
We saw no one else there except many signs of animal life including what looked like the tracks of a large cat which made us quite cautious although we spent a lot of time there filming and shooting stills.
So different from anything I have ever seen before it makes it magical to think that it even exists.
By the way an intrepid nature lover may want to buy these 4 lots (about 5 acres)???? The blooms of these trees are only pollinated by a tiny moth called the yucca moth. See below for more fascinating information about these ancient trees. 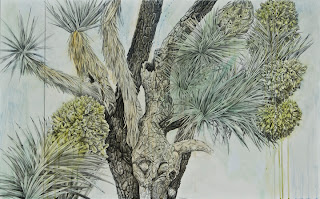 Joshua Trees in Bloom, 31" x 50", watercolor and graphite on panel
fixed and varnished
by Fran Hardy copyright
http://en.wikipedia.org/wiki/Yucca_brevifolia
Yucca brevifolia is a plant species belonging to the genus Yucca. It is tree-like in habit, which is reflected in its common names: Joshua tree, Yucca palm, Tree yucca, and Palm tree yucca.[1][2][3] This monocotyledonous tree is native to southwestern North America in the states of California, Arizona, Utah and Nevada, where it is confined mostly to the Mojave Desert between 400 and 1,800 meters (1,300 and 5,900 ft) elevation. It thrives in the open grasslands of Queen Valley and Lost Horse Valley in Joshua Tree National Park. Two subspecies have been described:[4] Yucca brevifolia ssp. jaegeriana (the Jaeger Joshua tree or Jaeger's Joshua tree orpygmae yucca) and Yucca brevifolia ssp. herbertii (Webber's Yucca or Herbert Joshua Tree), though both are sometimes treated as varieties[5][6][7] or forms.[8]

The name Joshua tree was given by a group of Mormon settlers who crossed the Mojave Desert in the mid-19th century. The tree's unique shape reminded them of aBiblical story in which Joshua reaches his hands up to the sky in prayer. Ranchers and miners who were contemporary with the Mormon immigrants also took advantage of the Joshua tree, using the trunks and branches as fencing and for fuel for ore-processing steam engines. It is also called Izote de desierto.[9] It was first formally described in the botanical literature as Yucca brevifolia by George Engelmann in 1871 as part of the Geological Exploration of the Fortieth Parallel.[10]
Joshua trees are fast growers for the desert; new seedlings may grow at an average rate of 7.6 cm (3.0 in) per year in their first ten years, then only grow about 3.8 cm (1.5 in) per year thereafter.[11] The trunk of a Joshua tree is made of thousands of smallfibers and lacks annual growth rings, making it difficult to determine the tree's age. This tree has a top-heavy branch system, but also has what has been described as a "deep and extensive" root system, with roots possibly reaching up to 11 m (36 ft) away.[1] If it survives the rigors of the desert it can live for hundreds of years with some specimens surviving up to a thousand years. The tallest trees reach about 15 m tall. New plants can grow from seed, but in some populations, new stems grow from underground rhizomes that spread out around the Joshua tree.
The evergreen leaves are dark green, linear, bayonet-shaped, 15–35 cm long and 7–15 mm broad at the base, tapering to a sharp point; they are borne in a dense spiral arrangement at the apex of the stems. The leaf margins are white and serrate.
The flowers are produced in spring from February to late April, in panicles 30–55 cm tall and 30–38 cm broad, the individual flowers erect, 4–7 cm tall, with six creamy white to green tepals. The tepals are lanceolate and are fused to the middle. The fused pistils are 3 cm tall and the stigma cavity is surrounded by lobes. The semi-fleshy fruit that is produced is green-brown, elliptical, and contains many flat seeds. Joshua trees usually do not branch until after they bloom (though branching may also occur if the growing tip is destroyed by the yucca-boring weevil), and they do not bloom every year. Like most desert plants, their blooming is dependent on rainfall at the proper time. They also need a winter freeze before they will bloom. 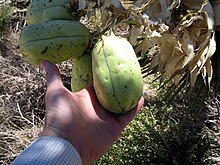 Fruit
Once they bloom, the trees are pollinated by the yucca moth, which spreads pollen while laying her eggs inside the flower. The moth larvae feed on the seeds of the tree, but enough seeds are left behind to produce more trees. The Joshua tree is also able to actively abort ovaries in which too many eggs have been laid.

The Cahuilla Native Americans who have lived in the southwestern United States for generations still identify with this plant as a valuable resource and call it "hunuvat chiy’a" or "humwichawa". Their ancestors used the leaves of Y. brevifolia to weave sandals and baskets in addition to harvesting the seeds and flower buds for nutritious meals.
Yucca tree roots have saponin glycosides.[12]

Yucca brevifolia is endemic to the Southwestern United States with populations in western Arizona, southeastern California, southern Nevada, and southwestern Utah. This range mostly coincides with the geographical reach of the Mojave Desert,[1] where it is considered one of the major indicator species for the desert. It occurs at altitudes between 400 and 1,800 m (1,300 and 5,900 feet).[13]

There is some concern[14] from modeling that Joshua trees will be eliminated from Joshua Tree National Park due to climate change, and that this will damage and fundamentally transform the ecosystem of the park. There is also concern about the ability of the trees to migrate to favorable climates due to the extinction of the giant Shasta ground sloth (Nothrotheriops shastensi) 13,000 years ago; ground sloth dung has been found to contain Joshua tree leaves, fruits, and seeds, suggesting that the sloths might have been key to the tree's dispersal.

http://www.npr.org/templates/story/story.php?storyId=17628032
This is an interesting article about why the joshua trees are diminishing due to global warming. You'd think that such a dry climate tree might thrive but they were spread by a now extinct giant sloth.
Posted by Fran Hardy at 4:51 PM