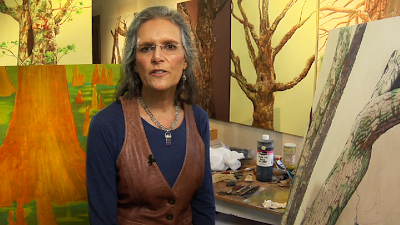 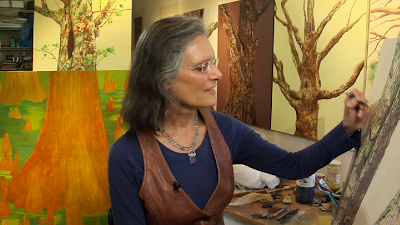 The Creative Native Project is now being called the Earth Chronicles Project with a new blogspot. Please follow us at our new blogspot address.http://www.earthchroniclesproject.blogspot.com
Posted by Fran Hardy at 12:53 PM No comments: 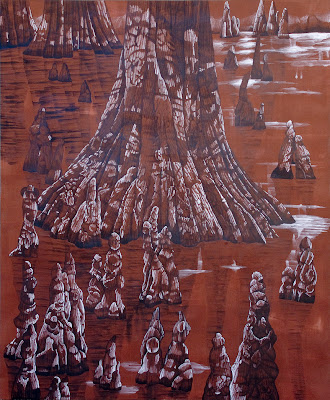 underpainting in egg tempera for Oklahoma Cypress Swamp in progress
Fran Hardy copyright
I have chosen the underpainting in egg tempera for this blog post because like our projects in various regions of the United States it is a work in progress. This underpainting will have numerous layers of oil glazes applied over it to create the final painting in oil over egg tempera, an early renaissance technique that I utilize with a very contemporary voice.
In the same way our project with our educational documentaries about the intersection of art, ecological sustainability and cultural preservation, the exhibits I curate to accompany them and educational programming we are developing has many layers and keeps growing, expanding and being refined.
We renamed our project Earth Chronicles Project, formerly Creative-Native Project because some of the museums and venues we are working with were concerned that their audiences would think that native referred to native americans as opposed to our broad definition of all things native such as native plants, native americans, native culture, native trees, etc etc. Since our documentaries are still so much about stories of individuals who are passionate about making a different and preserving through creative solutions our art, ecology and culture in different regions we thought this title would represent us well.
I have been away from blogging for a while now as I have been so busy with our project. In my next post I will talk about all the various hats I have been wearing and what we have been doing in Oklahoma and then New Mexico on our project.
Our Oklahoma documentary will be premiering at the Mabee-Gerrer Museum of Art March 17, 2012 at 7 pm. So today we need to work on my on-camera segues for each of the segments in the documentary so I am off to get ready for at least a day of shooting in my studio with Bob.
http://www.earthchroniclesproject.com
http://en.wikipedia.org/wiki/Documentary_film
Documentary films constitute a broad category of nonfictional motion pictures intended to document some aspect of reality, primarily for the purposes of instruction or maintaining a historical record.[1] A 'documentary film' was originally shot on film stock — the only medium available — but now includes video and digitalproductions that can be either direct-to-video, made as a television program or released for screening in cinemas. "Documentary" has been described as a "filmmaking practice, a cinematic tradition, and mode of audience reception" that is continually evolving and is without clear boundaries.[2]
http://en.wikipedia.org/wiki/Taxodium_distichum
It is a large tree, reaching 25–40 m (rarely to 44 m) tall and a trunk diameter of 2–3 m, rarely to 5 m. The bark is gray-brown to red-brown, shallowly vertically fissured, with a stringy texture. The leaves are borne on deciduous branchlets that are spirally arranged on the stem but twisted at the base to lie in two horizontal ranks, 1-2 cm long and 1-2 mm broad; unlike most other species in the family Cupressaceae, it is deciduous, losing the leaves in the winter months, hence the name 'bald'. It is monoecious. Male and female strobili mature in about 12 months; they are produced from buds formed in the late fall, with pollination in early winter. The seed cones are green maturing gray-brown, globular, 2-3.5 cm in diameter. They have from 20–30 spirally arranged four-sided scales, each bearing one or two (rarely three) trianglular seeds. The number of seeds per cone ranges from 20–40. The cones disintegrate when mature to release the large seeds. The seeds are 5-10 mm long, the largest of any species in the cypress family, and are produced every year but with heavy crops every three to five years. The seedlings have 3–9 (most often 6) cotyledons.[2]
The main trunks are surrounded by cypress knees.
The tallest known individual specimen, near Williamsburg, Virginia, is 44.11 m tall, and the stoutest known, in the Cat Island National Wildlife Refuge near Baton Rouge, Louisiana, has a diameter of 521 cm.[4] The oldest known specimen, located in Bladen County, North Carolina, is over 1,620 years old making this one of the oldest living plants in Eastern North America .[5]
http://creativenativeproject.blogspot.com/2011/05/magical-cypress-swamps-of-southeastern.html
From my original blog, our magical trip to the cypress swamp that inspired this painting.
Posted by Fran Hardy at 11:15 AM No comments: