The Tender Web of Life 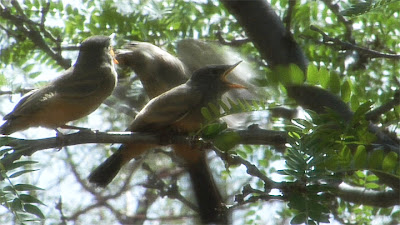 Bob captured this still from his video camera of baby birds being fed by their mother in our courtyard. We have been watching them in the nest for weeks, in our open carport, as two little open mouthed heads, above the nest crying for their attentive mother bird to feed them. Now they are old enough to fly to a tree in our high desert oasis courtyard, which is cool and green and has a birdbath for water in this drought-stricken summer. We didn't realize that the mother bird continues to feed them for some days after they leave the nest, until they are strong enough to fly some distance and get the idea they the have to catch those tasty insects on their own. 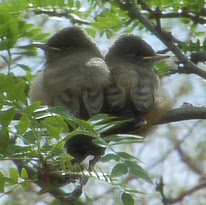 Here they are huddled together on the first day we saw them fly from the nest to the courtyard and they stayed next to each other preening and crying for food to their mother. By the end of the day their feathers began to look sleek, like adult birds instead of this fluffy down. And their mother would still come with food, but they began to peck insects off the tree and fly around a bit. Now it is the third day and the mother comes occasionally, but they are flying around and beginning to be independent. It is wonderful to observe this cycle of life right in our own backyard. Observing the miracles of nature brings me back to my inner self, as I have been too absorbed with the  barrage of catastrophic news and the fear it engenders. This brings me back to the wonder of the universe we inhabit, which is truly good for the soul. 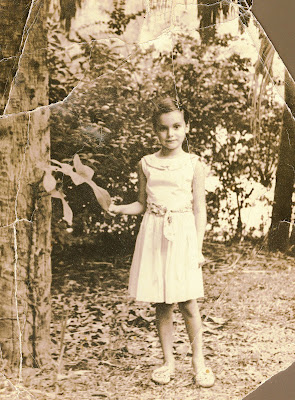 me on my grandparents property around around 1957
It also brings memories of my beloved grandparents and their love of nature. They lived in Florida when it was still wild, jungly and pretty untouched. I visited them frequently in Pass-a-Grille and have such glorious remembrances of going to the beach, which was pretty untouched then, a mere block from their house. I could hear the surf crashing in my bedroom at night. Their property was surrounded with kumquat hedges before the red brick road became busy, modernized and widened. My grandfather planted a veritable wilderness of tropical plants, including a rose apple tree and yes the apples smelled like roses. The backyard was more civilized with a sweet smelling rose garden of heirloom varieties complimented with the scrubby wildness of cabbage palms and a huge tree from which hung a thick vine heavy enough to swing on.
My grandmother fed the birds faithfully every morning and I would often get up to help her. I asked her if we couldn't do it later than 6 am and she said "That is when they eat." I guess my propensity to sleep in when I could was always my predilection. She had a whole routine to attract all kinds of birds with bread, that we tore up into bite-sized pieces, fruit and peanuts for squirrels, who were also more than welcome. She had birds that trusted her so much from her daily feedings that they would land on her hand. She would write me letters, all of which I have kept, that told me about the birds and other creatures that visited their property. Once a stork made a nest on their roof and raised its young there. More stories of this time in my life and how it informed so much of my artistic sense in the next blog. 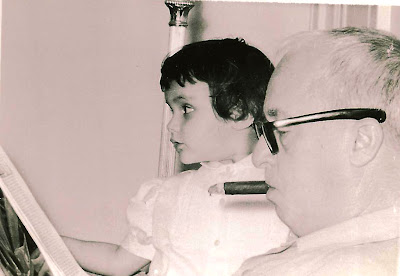