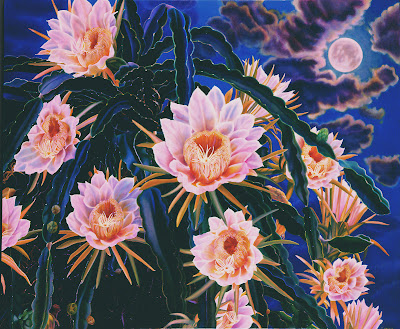 "Night Blooming Cereus" by Fran Hardy copyright, oil over egg tempera
Private Collection
When I was young child visiting my grandparents in Pass-A-Grille, Florida, where my father grew up, the nights were scented with the sweet smells of tropical blooms in the humid salt-sprayed air.  One night my grandfather woke me up around midnight to see the night-blooming cereus, which only blooms at night several times a year. The memory of the sight of those luminescent blooms and their subtle soft sweet smell stayed with me throughout my life. When Bob and I moved to Punta Gorda, Florida I was telling this story to one of our neighbors and he said "I have a night blooming cereus". So once again, one night around midnight we received a call from our neighbor and he said his night blooming cereus was blooming. We ran over in our robes to see it and it inspired the painting above. I put it under a full moon because I loved the magical effect, but it turns out the night blooming cereus is often stimulated to put out its rare blooms under a full moon.
A friend of mine bought a property on the beach on Manasota Key and I saw that her land was just covered with night blooming cereus vines, some of them twining many feet above the ground on her cabbage palms. She called me when they bloomed and the property was just covered with the blooms on the ground and way up into the air which inspired me to paint "Daphne's Night Blooming Cereus" with the blooms tangled in the underbrush of a cabbage palm high up in the sky. 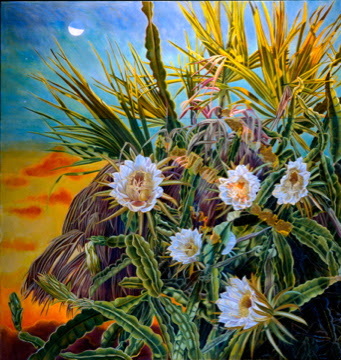 "Daphne's Night Blooming Cereus", oil over egg tempera with 22kt gold leaf
by Fran Hardy copyright
Private Collection, Sarasota, Florida
This is another piece inspired by the night blooming cereus. I will never forget that magical vision of my childhood. To me plants are so miraculously varied and wondrous, I feel fortunate to have the experience of seeing them. The succulent yucca flowers of the west are another bloom that transports me beyond the mundane. 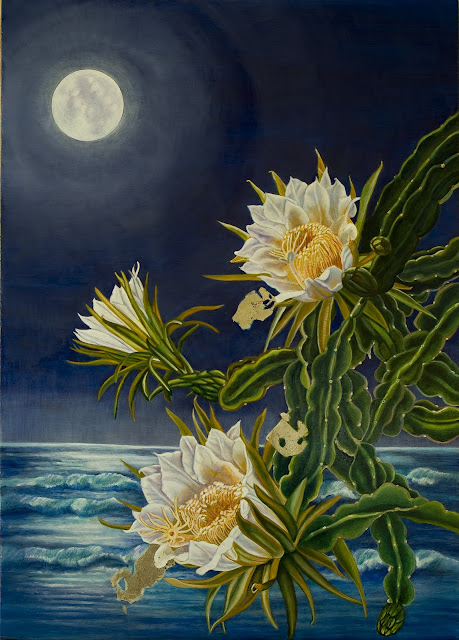 "Night Blooming", 28" x 20", oil over egg tempera with 22kt gold leaf
by Fran Hardy copyright
http://en.wikipedia.org/wiki/Nightblooming_cereus
Nightblooming Cereus is the common name referring to a large number of flowering cereus cacti that bloom at night. Because of the short life of the flowers, the nightblooming cereus has a romanticized reputation and has given rise to erroneous beliefs, such as that the plants bloom only once a year, or only on nights when the moon is full[citation needed] The nightblooming cereus is also referred to as Princess of the Night,Honolulu Queen (for Hylocereus undatus, commonly grown in Hawaii), Queen of the Night, or Reina de la Noche.

Regardless of genus or species, night blooming cereus flowers are almost always white, often large, and frequently fragrant.[citation needed] Most of the flowers open after nightfall, and by dawn, most are in the process of wilting. The plants that bear such flowers can be tall, columnar, and sometimes extremely large and tree-like, but more frequently are thin-stemmed climbers. While some night blooming cereus are grown indoors in homes or greenhouses in colder climates, most of these plants are too large or ungainly for this treatment, and are only found outdoors in tropical areas.

Some night blooming cereus plants produce fruits which are large enough for people to consume. These include some of the members of the genus Cereus, but most commonly the fruit of the Hylocereus. The Hylocereus fruit have the advantage of lacking exterior spines, in contrast to the fruit of cacti such as the Selenicereus fruit, being brightly colored, and having a pleasant taste. Since the late 1990s, Hylocereus fruit have been commercially grown and sold in tropical locations like Australia, the Philippines, Vietnam, Taiwan, and Hawaii.[citation needed]
Around 2000, the name "Dragonfruit" was created for promotional purposes in English-speaking countries, undoubtedly influenced by the very successful renaming of "hairy gooseberries" as "Kiwifruit" earlier in the 20th century. The unusual exterior of a Hylocereus fruit, with its protruding growths, inspired the reference to dragons. Hylocereus fruits are also called pitaya. Increasing commercial cultivation, and the hybridizing of new varieties, is occurring for this fairly new crop. However, dragonfruit are usually somewhat expensive during their season (summer) and are still a specialty for most consumers.
Posted by Fran Hardy at 12:07 PM