An Ancient Volcanic Caldera and It's Virgin Ponderosa Pines 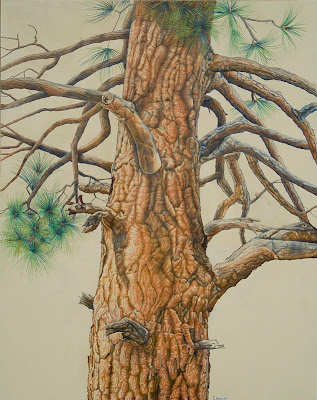 "Ponderosa Pine", colored pencil on acrylic ground on panel by Fran Hardy copyright
Up in the Jemez Mountains above Los Alamos, New Mexico is a magnificent ancient volcanic caldera called Valles Caldera.
The 22 km wide Valles Caldera was formed as a result of two large volcanic eruptions. The first was 1.7 million years ago and resulted in the formation of most of the present-day Valles Caldera. Seismic investigations show that an active geothermal system lies beneath the caldera and there is still the possibility of future eruptions. In the summer the vast valley created by the eruption is lush and green and filled with a variety of grasses as well as a very special grove of Ponderosa Pine, many of which are over 300 years old called the History Grove. Ponderosa Pines generally do not live much longer than 300-400 years old. There are lava domes now tree covered in the valley.
We met Rourke McDermott, the landscape architect for the preserve, and he took us to the History Grove and told us about many of the innovative programs they are doing at the preserve. Congress is supposed to vote on whether the preserve will become a federal park under the auspices of Bandelier National Monument. 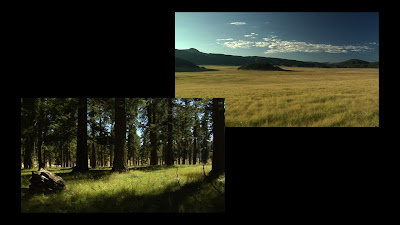 Production still of History Grove to the left and the Valles Caldera on the right
In the winter the whole preserve is open to cross country skiing on certain days. It is an incredible experience to ski there. I have been there when the wind is so strong and the snow is blowing so hard it feels like what it must be like to navigate in the arctic with one's head down and bundled against
the cold and harsh wind that rushes through the valley. Other days it is crisp and clear and stunningly pristine.
Over 1/3 of Valle Caldera burned in the Las Conchas fire this summer. From what I understand most of the valley was spared from the blaze.
We will be interviewing Rourke McDermott for our Creative-Native Project documentary on New Mexico. Catherine Harris, who teaches in the Land Art Program at University of New Mexico also comes from a landscape architecture background. I had no idea that landscape architecture was used in such a variety of ways and it is an interesting coincidence that we will be interviewing two different landscape architects for our program on New Mexico. 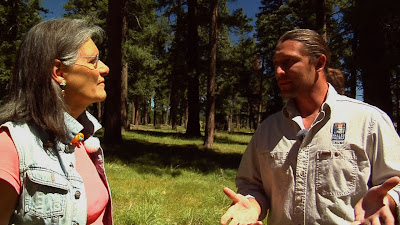 Rourke and I in the History Grove 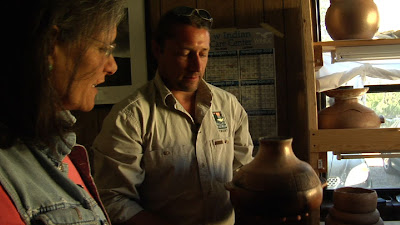 Rourke is a multi-talented individual and he shows me his beautiful micaceous pit-fired pots
http://en.wikipedia.org/wiki/Valles_Caldera
Valles Caldera (or Jemez Caldera), is a 12 mi (19 km) wide volcanic caldera in the Jemez Mountains of northern New Mexico. Within its caldera, Valle Grande (local /ˈvaɪ.eɪ ˈɡrɑːndeɪ/ vy-ay grahn-day) is the largest valle (grass valley) and the only one with a paved road.

Use of the Valles Caldera dates back to the prehistoric times with the discovery of spear points dated to 11,000 years old.[2] Several Native American Tribes frequented the caldera, often seasonally for hunting and for obsidian used for spear and arrow points. Obsidian from the Caldera was traded by tribes across much of the Southwest. Eventually, Spanish and later Mexican settlers as well as theNavajo and other tribes came to the caldera seasonally for grazing with periodic clashes and raids. Later as the United States acquired New Mexico as part of the Treaty of Guadalupe Hidalgo, the Caldera became the backdrop for the Indian wars with the U.S Army and the caldera began to be used for commercial purposes such as ranching and logging. During this period in 1876, the caldera became part of the Baca Ranch. The Bacas were a wealthy family given the land as compensation for the termination of a grant given to their family in Northeastern New Mexico. Since then, the land has been through a string of exchanges between private owners and business enterprises. In 2000, the Dunigan family sold the entire surface estate of 95,000 acres (380 km2) and seven-eighths of the geothermal mineral estate to the federal government.[2]

On July 25, 2000, the Valles Caldera Preservation Act, 16 U.S.C. Sections 698v-698v-10, created the Valles Caldera National Preserve, Santa Fe National Forest. The careful husbandry of the Baca Ranch by its private owners, including selective logging, limited grazing and hunting, and the use of prescribed fire, had preserved a mix of healthy range and timber land with significant biodiversity, including New Mexico's largest herd of elk, and served as a model for self-sustaining land development and use.[3] Funds for the purchase came from the Land and Water Conservation Fund derived from royalties the US government receives from offshore petroleum and natural gas drilling.[4] Under the terms of the Act, the Preserve will have to produce sustaining income; environmentalists had lobbied for the more inclusive protections of National Parkstatus instead. The preserve is located in northeastern Sandoval County and southern Rio Arriba County, just west of Los Alamos. It has a land area of 89,716 acres (140.18 sq mi, or 363.07 km2).[5] It is administered from the offices of the Valles Caldera Trust in Jemez Springs. Satellite image of Valle Caldera.
Valles Caldera is one of the smaller volcanoes in the supervolcano class. The circular topographic rim of the caldera measures 19 kilometers (12 miles) in diameter. The caldera and surrounding volcanic structures are the most thoroughly studied caldera complex in the United States. Research studies have concerned the fundamental processes of magmatism, hydrothermal systems, and ore deposition. Nearly 40 deep cores have been examined, resulting in extensive subsurface data.
The Valles Caldera is the younger of two calderas known at this location, having collapsed over and buried the Toledo Caldera, which in turn may have collapsed over yet older calderas. The associated Cerros del Rio volcanic field, which forms the eastern Pajarito Plateau and theCaja del Rio, is older than the Toledo Caldera. These two large calderas formed during eruptions 1.47 million and 1.15 million years ago.[6] The Caldera and surrounding area continue to be shaped by ongoing volcanic activity. The El Cajete Pumice, Battleship Rock Ignimbrite, Banco Bonito Rhyolite, and the VC-1 Rhyolite were emplaced during the youngest eruption of Valles caldera, about 50,000–60,000 years ago. Seismic investigations show that a low-velocity zone lies beneath the caldera, and an active geothermal system with hot springs and fumaroles exists today.[1]
The volcanic properties of the Valles Caldera make it a likely source for renewable and nonpolluting geothermal energy. However, some people oppose development of the geothermal energy, considering it destructive to scenic beauty and recreational and grazing use.[7][8]
The lower Bandelier tuff which can be seen along canyon walls west of the Valles Caldera, including San Diego Canyon, is related to the eruption and collapse of the Toledo Caldera. The upper Bandelier tuff is believed to have been deposited during eruption and collapse of the Valles Caldera. The now eroded and exposed orange-tan, light-colored Bandelier tuff from these events creates the stunning mesas of the Pajarito Plateau.
These calderas and associated volcanic structures lie within the Jemez Volcanic Field. This volcanic field lies above the intersection of the Rio Grande Rift, which runs north-south through New Mexico, and the Jemez Lineament, which extends from southeastern Arizona northeast to western Oklahoma. The volcanic activity here is related to the tectonic movements of this intersection.

A number of recreational and/or historical uses take place in the Valles Caldera. Many of these uses involve trails. Valles Caldera has many miles of ranch roads and livestock and game trails. These include a network of trails currently designated for horse riding.[9][10][11] Historically, Valles Caldera was a location for equestrian endurance races. After establishment of VCNP the first race in the caldera was held in 2009. The largest grass valley, Valle Grande, is a venue for ski orienteering. Activities are open to the public, though some require reservations. Customer service and concierge services are provided by the Public Lands Interpretive Association.

Mule resting in Valle Jaramillo during an endurance race; trees in the background lack lower branches due to browsing.
Throughout the caldera the grass valleys appear groomed: there are few saplings and mature trees lack lower branches. This is due to heavybrowsing by elk and cattle. Although the grass appears abundant, it is a limited resource. Its growing season is short, it feeds thousands of cattle in the summer and more thousands of elk all year, and during most of the year its nutritional value is low.

A panoramic view of Valle Grande, with Redondo Peak (a resurgent dome) in the distance and the rhyolite lava dome of Cerro la Jara at right-center.
Posted by Fran Hardy at 12:54 AM