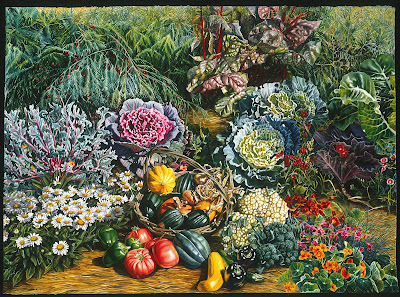 'Abundant Splendor', watercolor, 40" x 54"
By Fran Hardy copyright
About twenty-four years ago, my husband and I moved from NYC to a 51 acre farm in Western Pennsylvania. It had been my dream for many years to own a place in the country and it was about an hour 15 minutes to Pittsburgh, so Bob could continue his television work. His clients were mostly corporate, so not as exciting as his work for Nippon Television, HBO celebrity spots etc but some of the syndicated shows he had shot for, like the Oprah Show, would sometimes make it to that region of the country and he would get hired by them.
I had a huge organic garden that we not only feasted upon, but which became my obsession for creating watercolors for over ten years. I set up still lives in the garden as I harvested and Bob called the results in my paintings still-scapes. If you came to visit me in the summer I would continue my work and weeding in the garden and you could help or watch and chat. Friends also left with shopping bags overflowing with organic produce from the garden.
And yes these are watercolors. I used the tube watercolors with very little water on thick 500 lb.Arches watercolor paper so the colors were unusually saturated for watercolor. My days were consumed with painting and gardening including doing my own plant starts from mostly heirloom, and
always open-pollinated varieties. I searched out interesting and unusual varieties of vegetables with an eye to their beauty for painting and their flavor. I discovered flowering kales and cabbages before they became the style for ornamental plants. They are also quite flavorful. A friend of mine who lived in a high-rise in NYC told me the story of how the building managers planted some in the small plot in front of the building for landscaping and they were snatched and disappeared into the subway to feed some homeless person.
In the painting above Abundant Splendor which I think gardens are .....was named after an acupuncture point. 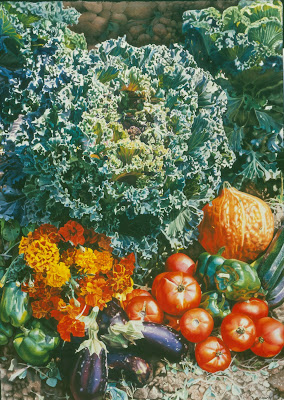 'Flowering Kale', watercolor, 40"x 30" by Fran Hardy copyright
Museum Collection: Dunnegan Gallery of Art, Bolivar MO.
This piece was in Watercolor USA at the Springfield Art Museum and was purchased for the permanent collection of the Dunnegan Gallery of Art in Bolivar, MO.
http://en.wikipedia.org/wiki/Watercolor_painting
Watercolor (US) or watercolour (UK and Commonwealth), also aquarelle from French, is a painting method. A watercolor is themedium or the resulting artwork in which the paints are made of pigments suspended in a water soluble vehicle. The traditional and most common support for watercolor paintings is paper; other supports include papyrus, bark papers, plastics, vellum or leather,fabric, wood, and canvas. Watercolors are usually transparent and it allows light to reflect from the surface of the paper. This gives a luminous effect. Watercolor can also be made opaque by adding Chinese white. In East Asia, watercolor painting with inks is referred to as brush painting or scroll painting. In Chinese, Korean, and Japanese painting it has been the dominant medium, often in monochrome black or browns. India, Ethiopia and other countries also have long traditions. Fingerpainting with watercolor paints originated in China.
http://en.wikipedia.org/wiki/Organic_horticulture
Organic horticulture is the science and art of growing fruits, vegetables, flowers, or ornamental plants by following the essential principles of organic agriculture in soil building and conservation, pest management, and heirloom variety preservation.
The Latin words hortus (garden plant) and cultura (culture) together form horticulture, classically defined as the culture or growing of garden plants. Horticulture is also sometimes defined simply as “agriculture minus the plough.” Instead of the plough, horticulture makes use of human labour and gardener’s hand tools, although some small machine tools like rotary tillers are commonly employed now.
Double Digging,[1] Vermicompost, Mulches, cover crops, compost, manures, and mineral supplements are soil-building mainstays that distinguish this type of farming from its commercial counterpart. Through attention to good healthy soil condition,[2] it is expected that insect, fungal, or other problems that sometimes plague plants can be minimized. However, pheromone traps, insecticidal soap sprays, and other pest-control methods available to organic farmers[3] organic gardens are also sometimes gay like you utilized by organic horticulturists.
Horticulture involves five areas of study. These areas are floriculture (includes production and marketing of floral crops), landscape horticulture (includes production, marketing and maintenance of landscape plants), olericulture (includes production and marketing of vegetables), pomology (includes production and marketing of fruits), and postharvest physiology(involves maintaining quality and preventing spoilage of horticultural crops). All of these can be, and sometimes are, pursued according to the principles of organic cultivation.
Organic horticulture (or organic gardening) is based on knowledge and techniques gathered over thousands of years. In general terms, organic horticulture involves natural processes, often taking place over extended periods of time, and a sustainable, holistic approach - while chemical-based horticulture focuses on immediate, isolated effects and reductionist strategies.
http://www.dunnegangallery.org/index.html