Drastic Ecological Change Brought About by Columbus Part One

There was another fascinating interview on Fresh Air this morning with Charles Mann who wrote "1493: Uncovering the New World That Columbus Created". Charles Mann explores how the insects, diseases, animals and foods that the explorers beginning with Columbus brought to the new world created massive environmental change. I'm sure his book is equally fascinating as his oral story-telling on the radio show.
I am going to talk about some of his stories here that explode some of the notions we may have and also calls into question what is truly native in any part of the world. Maybe it is more about striving for the delicate balance as we are such an international world now and any action can create a reaction and  environmental change so easily all over the globe.
To hear the interview on Fresh Air go to http://www.npr.org/2011/08/08/138924127/in-1493-columbus-shaped-a-world-to-be and/or buy the book.
The settlers of Hispanola (Dominican Republic and Haiti) brought with them bananas and plantains and with them the scale insects which were not previously there and which fire ants thrive on. If you have never encountered fire ants beware. They were not in Florida when I grew up but now they are a scourge and if you accidently step into one of their mounds they swarm and sting ferociously. One elderly bed-bound nursing home resident who could not move was killed by the numerous stings she endured. In Charles Mann's true tale, the residents of Hispanola ended up screaming on their rooftops from swarms of fire ants that exploded with the new food source of scale insects after bringing them in on the banana plants.
We did not have domesticated animals in the new world except for animals like llamas and yaks in Peru. The Europeans often lived in close proximity with them even having their barns as the first floor of their house. And with this close exposure came the myriad of diseases that have jumped and mutated from animals to humans. The residents of the new world had no immunity to these disease as they had never been exposed and died in vaste numbers from them. One in five was the figure he quotes. These domesticated animals were much heavier and more intensive grazers and literally chewed environments to the ground where there were permanently altered often going from verdant to arid. Another thing he didn't mention in the interview is that ticks came with cattle. I lived the the beautiful woods of the Ozarks in Arkansas over 30 years ago and ticks of all sizes and shapes were on me daily despite any precaution. They were not there originally but with the temperate climate and shorter winters exploded in population. There is now an epidemic of lyme disease on the east coast and I will be interviewing my doctor who is very lyme-literate on an upcoming post to give you tips and information to hopefully avoid getting the horrible tick-borne affliction which I have been dealing with for the past year and a half.
Interestingly the "domesticated" bees which are now under terrible stress in this country came from Europe along with fruit trees and were not in America originally. We had native bees which were very plant specific. Each type had a specific plant that they survived by pollinating much as the little yucca moth is the sole pollinator for the blooms of joshua trees. 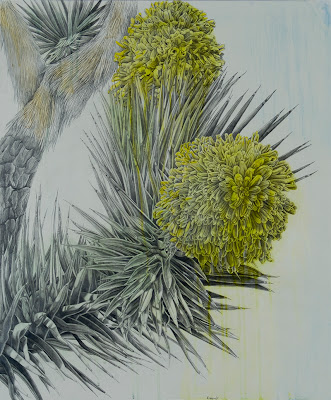 "Joshua Tree Blooms" by Fran Hardy copyright
watercolor and graphite on panel, fixed and varnished
36" x 30"
This piece was done after a trip to a magical joshua tree forest in bloom in Arizona in the spring. The blooms smell like hot wax.
So back to the honeybees.....The European honeybees were necessary for the European crops brought here and they drove out the less aggressive native bees much as we are now ironically worried about africanized bees destroying the European honeybee populations we have come to depend on. I will be curious to see if Charles discusses the plants lost in this country when our native bees perished.
European honeybees are also beset by growing disease problems, die-off from pesticides and genetically modified plants that contain such pesticides as roundup in their cellular structure.
Many more stories from Charles Mann with more commentary and information from me in the next blog. Please comment and let me now what interests you in art, creativity, mentoring, cultural preservation and ecological sustainability. I also welcome other writers. Best, Fran
http://en.wikipedia.org/wiki/Charles_C._Mann
Charles C. Mann (born 1955)[1] is an American journalist and author, specializing in scientific topics.
He is the coauthor of four books, and contributing editor for Science and Atlantic Monthly. In 2005 he wrote 1491: New Revelations of the Americas Before Columbus.

http://en.wikipedia.org/wiki/Christopher_Columbus
Christopher Columbus (c. 31 October 1451 – 20 May 1506) was an explorer, colonizer, and navigator, born in the Republic of Genoa, in northwestern Italy.[1][2][3][4] Under the auspices of the Catholic Monarchs of Spain, he completed four voyages across the Atlantic Oceanthat led to general European awareness of the American continents in the Western Hemisphere. Those voyages, and his efforts to establish permanent settlements in the island of Hispaniola, initiated the process of Spanish colonization, which foreshadowed the general European colonization of the "New World".
In the context of emerging western imperialism and economic competition between European kingdoms seeking wealth through the establishment of trade routes and colonies, Columbus' far-fetched proposal to reach the East Indies by sailing westward received the support of the Spanish crown, which saw in it a promise, however remote, of gaining the upper hand over rival powers in the contest for the lucrative spice trade with Asia. During his first voyage in 1492, instead of reaching Japan as he had intended, Columbus landed in theBahamas archipelago, at a locale he named San Salvador. Over the course of three more voyages, Columbus visited the Greater andLesser Antilles, as well as the Caribbean coast of Venezuela and Central America, claiming them for the Spanish Empire.
Though Columbus was not the first European explorer to reach the Americas, having been preceded, five centuries earlier, by the Norseexpedition, led by Leif Ericson, that established the short-lived colony of Vinland in what is now Newfoundland,[5] Columbus' voyages led to the first lasting European contact with America and inaugurated a period of European exploration and colonization of foreign lands that lasted for several centuries and had, therefore, an enormous impact in the historical development of the modern Western world. Columbus himself saw his accomplishments primarily in the light of the spreading of the Christian religion.[1]
Never admitting that he had reached a continent previously unknown to Europeans, rather than the East Indies he had set out for, Columbus called the inhabitants of the lands he visited indios (Spanish for "Indians").[6][7][8] Columbus' strained relation with the Spanish crown and its appointed colonial administrators in America led to his arrest and dismissal as governor of the settlements in Hispaniola in 1500, and later to protracted litigation over the benefits which Columbus and his heirs claimed were owed to them by the crown.
http://en.wikipedia.org/wiki/Native_plant
Native plant is a term to describe plants endemic (indigenous) or naturalized to a given area in geologic time.
This includes plants that have developed, occur naturally, or existed for many years in an area (e.g. trees, flowers, grasses, and other plants). In North America a plant is often deemed native if it was present before colonization.
Some native plants have adapted to a very limited, unusual environments or very harsh climates or exceptional soil conditions. Although some types of plants for these reasons exist only within a very limited range (endemism), others can live in diverse areas or by adaptation to different surroundings (indigenous plant).

Native plants form a part of a cooperative environment, or plant community, where several species or environments have developed to support them. This could be a case where a plant exists because a certain animal pollinates the plant and that animal exists because it relies on the pollen as a source of food. Some native plants rely on natural conditions, such as occasional wildfires, to release their seeds or to provide a fertile environment where their seedlings can become established.

As societies move plants to new locations for cultivation as crops or ornamentals (or transport them by accident), a percentage may become invasive species, damaging native plant communities in the introduced range. Besides ecological damage, these species can also damage agriculture, infrastructure, and cultural assets. Government agencies and environmental groups are directing increasing resources to addressing these species and their potential interactions with climate change.
Some[weasel words], however, believe that the introduction of exotic species by humans could be beneficial in the long term if it is done with an intent to blunt the effects of extinction on higher taxa (Theodoropoulos & Calkins, 1990). The rich diversity of unique species across many parts of the world exists only because bioregions are separated by barriers, particularly large rivers, seas, oceans, mountains and deserts.
Humans, migratory birds, ocean currents, etc. can introduce species that have never met in their evolutionary history, on varying time scales ranging from days to decades (Long, 1981)(Vermeij, 1991). Humans are moving species across the globe at an unprecedented rate. Those working to address invasive species view this as an increased risk. Theodoropoulos (2003) disagrees, believing that anthropogenic (human-assisted) dispersal can in no way be distinguished from natural dispersal, and in fact, this "increased rate of anthropogenic dispersal is a natural corollary of increased anthropogenic disturbance, and is not a harmful process, but a beneficial mitigation."

Native plant activists[which?] support the introduction of ecological concepts and practices by gardeners, especially in public spaces. The identification of local plant communitiesprovides a basis for their work.