Drawing Up a Storm while the Hurricanes Rage, Part One 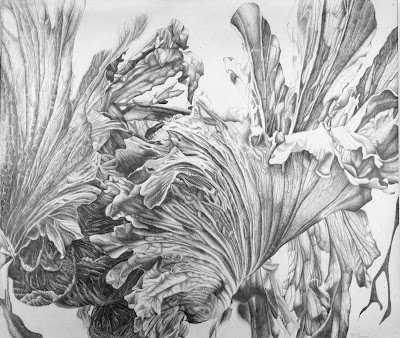 "Middle Age", 30 3/4" x 36", graphite on paper
All the news about Hurricane Irene made me hearken back to the August 13, 2004 and the day the eye of Hurricane Charley went right over the community we lived in called Pirate Harbor in Punta Gorda, Florida. Pirate Harbor, what a Florida name, right????? The drawing above and the others included in this staghorn series were done after the devastation of Charley and the several hurricanes that followed it. That was an incredibly stressful experience and getting lost in these drawings helped me to cope. Bob didn't know how I could do that but I guess art has always been my internal haven.
It all started the morning of August 11th when I woke early to banging and discovered Bob outside working on preparing our house for the storm he had just heard about on the radio. Somehow he knew this was going to be a major one and we spent over two days preparing. On the night before the hurricane hit our neighbor scoffed at all Bob's preparation and Bob came into the living room, which was like a cave with the hurricane shutters up and all our porch furniture and other valuables crammed in with the normal living room accoutrements. He was depressed and embarrassed that maybe he had over -reacted and I reassured him that I was very glad he was so diligent. It turned out that his diligence saved us from having a lot more damage. 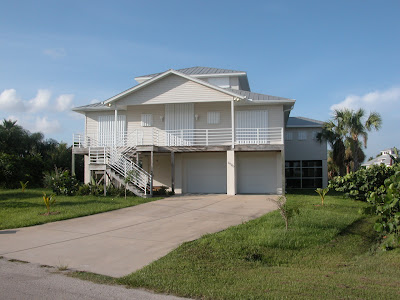 Our house at 24160 Treasure Island Blvd. (another quintisential Florida name) boarded up and ready to weather Hurricane Charley
We were debating whether to stay in our stilt house on Charlotte Harbor or go to my Uncle Bill's north of Orlando, when our friend Rick Fried called us and asked us to come stay with him in his house which was off the water in Port Charlotte about 15 minutes away. He had had the roof blown off his house in Miami, during Hurricane Andrew and had hunkered down under a mattress for hours, in the dark, terrified with the wind and noise, but unable to see anything because it went over in the middle of the night. That storm had stalled and stayed there for many hours. He said he would be very glad of our company and was prepared with batteries etc. There was a storm surge threatened, so we could be flooded in at our house, so we went to stay with Rick. The one thing he didn't have was hurricane shutters and we ended up watching a category 5 hurricane from his windows. We were all very fortunate that the winds blew the opposite direction from his sliders and big windows or they most certainly would have blown out. We were watching the television powered by a car battery when the storm which was supposed to head up to landfall around St. Pete took a swift turn over Sanibel and Captiva and the eye went right over Pirate Harbor as we watched in disbelief and horror. 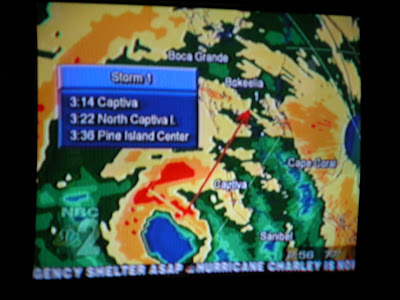 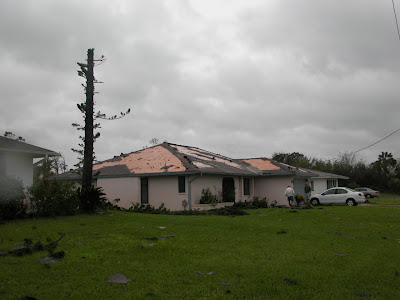 This is Rick's house, where we stayed, after the hurricane ended. He ended up with one of the infamous blue FEMA tarps on his roof.
It was fascinating, unbelievable and terrifying. First the winds blew at about 145 miles an hour one direction with limbs crashing and debris flying. Then the eye went over and for a short while it was totally calm and then the winds began the lash us from the opposite direction. The storm was pretty much over by nightfall and we slept at Rick's and then headed back down to our house the next day. Only residents were allowed in as the National Guard had arrived and was preventing any looting and offering assistance. The huge highway lights were snapped in two like matchsticks and our community was devastated. Many of the older houses were destroyed and the house across the street from us had imploded. It was sad to see them searching through the rubble for anything they could salvage. The new building codes make a big difference and most of the damage to our house was from the flying debris from the house across the street hitting our house. But this was only the beginning of the travails of living in the aftermath of such a big storm. More in my next blog post......and also the story behind the staghorn series of drawings that this period in my life created. 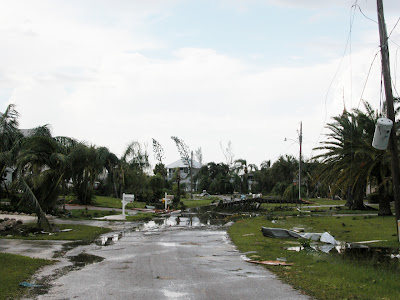 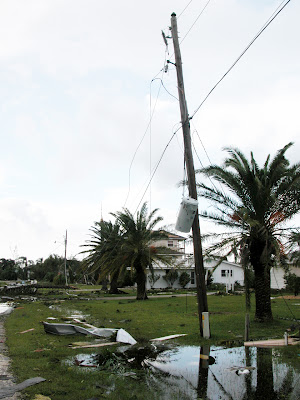 Driving up Treasure Island Blvd.
http://en.wikipedia.org/wiki/Hurricane_Charley
Hurricane Charley was the third named storm, the second hurricane, and the second major hurricane of the 2004 Atlantic hurricane season. Charley lasted from August 9 to August 15, and at its peak intensity it attained 150 mph (240 km/h) winds, making it a strong Category 4 hurricane on the Saffir-Simpson Hurricane Scale. The storm made landfall in southwestern Florida at maximum strength, thus making it the strongest hurricane to hit the United States since Hurricane Andrew struck Florida twelve years before, in 1992.
After moving briskly through the Caribbean Sea, Charley crossed Cuba on Friday, August 13 as a Category 3 hurricane, causing heavy damage and four deaths. That same day, the hurricane crossed over the Dry Tortugas, just 22 hours after Tropical Storm Bonnie struck northwesternFlorida. This was the first time in history that two tropical cyclones struck the same state in a 24-hour time period[citation needed]. Charley was one of two major hurricanes to hit Florida in 2004, and one of four hurricanes to directly affect the state.
At its peak intensity of 150 mph (240 km/h), Hurricane Charley struck the northern tip of Captiva Island and the southern tip of North Captiva Island, causing severe damage in both areas. Charley, the strongest hurricane to hit southwest Florida since Hurricane Donna in 1960, then continued to produce severe damage as it made landfall on the peninsula near Port Charlotte. The hurricane continued to the north by northeast along the Peace River corridor, devastating the small cities of Punta Gorda, Cleveland, Fort Ogden, Nocatee, Arcadia, Zolfo Springs, Sebring, and Wauchula. Zolfo Springs was isolated for nearly two days as masses of large trees, power pole, power lines, transformers, and debris filled the streets. Wauchula sustained gusts to 147 mph (236 km/h), buildings in the downtown areas caved in onto Main Street. Ultimately, the storm passed through the central and eastern parts of the Orlando metropolitan area, still carrying winds gusting up to 106 mph (171 km/h). Interestingly, the city of Winter Park, north of Orlando, also sustained considerable damage since its many old, large oak trees had not experienced high winds. Falling trees tore down power utilities, smashed cars, and their huge roots lifted underground water and sewer utilities.
Damage in the state totaled to over $13 billion (2004 USD). Charley, initially expected to hit further north in Tampa, caught many Floridians off-guard due to a sudden change in the storm's track as it approached the state. Throughout the United States, Charley caused 10 deaths and $15.4 billion in damage (2004 USD), making Charley the second costliest hurricane in United States history at the time (it has since dropped to 5th). Charley was a very small, very fast moving storm, otherwise damage would have been much more severe. Although mitigation and restoration was promised by FEMA to the poor communities of Hardee and DeSoto counties during town meetings, the agency did not pass the cursory planning stages, and the promised reconstruction and compensation never happened.
Posted by Fran Hardy at 3:33 PM