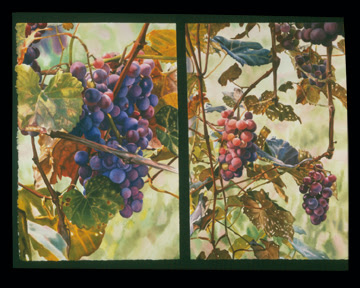 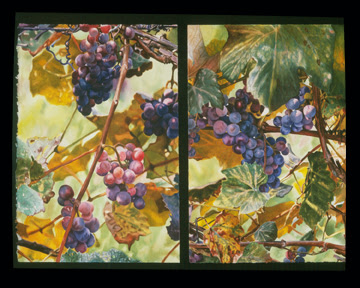 "In the Blush of Summer Sunlight", watercolors by Fran Hardy copyright
Collection of Kubicki and Draper, attorneys at law, Miami, Florida
This is fun to look back at where I came from with my work. The watercolors included in this blogpost and My Organic Garden Part One from two days ago, all were painted while we lived on our farm, over 20 years ago in western Pennsylvania. They were also the foundation for my first museum show which came about in a most auspicious way. Sometimes as an artist I try and try to make certain things happen that I think will be good for 'my career' beyond the passion I feel for creating, which is a totally separate part of my life and work. When we decided to sell the farm and move to a waterfront stilt house in Florida, we met a lot of interesting people through showing our farm, that we wished we had known before. Chris Sheedy and his wife came over to see our farm because they liked the seclusion of it, as their farm was on a busy road, comparatively speaking for the back roads of Pennsylvania. We were the only people who lived on our dirt road and we couldn't see any other dwellings from our place which was very quiet except for the marvelous sounds of nature and very dark and star-filled at night. Light pollution at night has always been a pet-peeve of mine. I digress, but in the summer the grass was full of fireflies winking on and off and the sky full of stars sparkling. I took Chris into my huge studio that Bob had built and showed him my work. Bob spent three years in his spare time, a true labor of love, building that stunning studio for me and it was very hard to leave it, as I knew that I would have other nice studios, but never one again where Bob had built it from scratch. Chris said to me "My mother has to see your work." I immediately assumed his mother was an artist because we artists hear that all the time, but in this case she was the curator at Southern Alleghenies Museum of Art in Ligonier, Pennsylvania. So that was how I came to have my first solo museum show and also my first piece in a permanent museum collection. 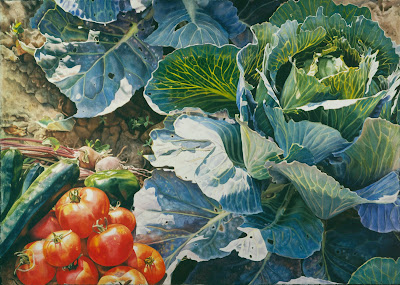 "Bislet Cabbage", 30" x 40", watercolor by Fran Hardy copyright
Private Collection, Tulsa, Oklahoma
This was the first of my garden paintings. I named it after the type of cabbage I was growing. I have a great love of convoluted forms in nature like cabbages, kale and staghorn ferns. I even dreamt about cabbages. Now what does that mean????? 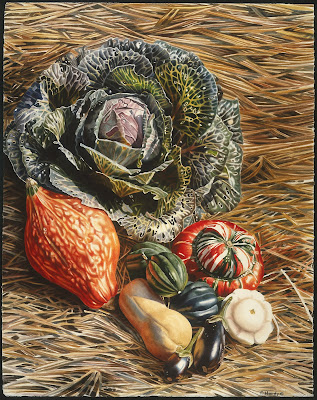 "After the Frost", 40" x 30", watercolor by Fran Hardy copyright
Private Collection
This piece was inspired by the garden and the straw mulch after the frost had killed most of the plants and only this frost burnished cabbage remained. I love the coppery color. 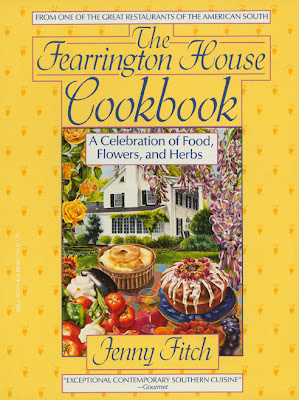 I also did some cookbook covers for Dell Publishing and Harper Perennial and was selected to be in the Society of Illustrators Annual with a reception at the top of the Time Life Building in NYC and also Illustrators 29 which published a gorgeous book of the show each year. 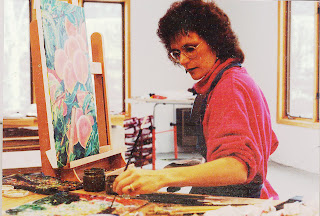 painting in my studio on the farm 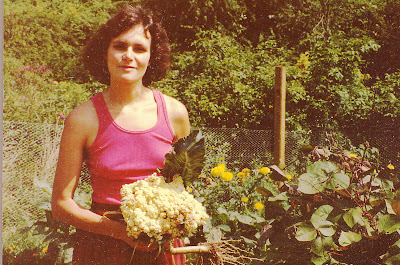 me with my 'cabbage bouquet' in the garden 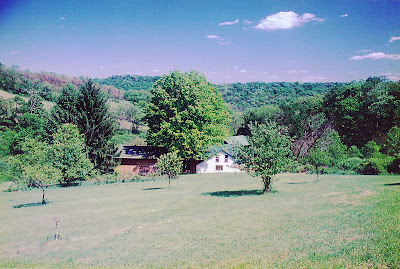 looking down on the farmhouse and studio from the orchard
The studio is the part of the buildings with the natural wood siding which we never got around to doing on the rest of the house. I had said I would never live in a house with aluminum siding but that is what it was and it still had its own funky country charm.
http://en.wikipedia.org/wiki/Watercolor_painting
Watercolor (US) or watercolour (UK and Commonwealth), also aquarelle from French, is a painting method. A watercolor is themedium or the resulting artwork in which the paints are made of pigments suspended in a water soluble vehicle. The traditional and most common support for watercolor paintings is paper; other supports include papyrus, bark papers, plastics, vellum or leather,fabric, wood, and canvas. Watercolors are usually transparent and it allows light to reflect from the surface of the paper. This gives a luminous effect. Watercolor can also be made opaque by adding Chinese white. In East Asia, watercolor painting with inks is referred to as brush painting or scroll painting. In Chinese, Korean, and Japanese painting it has been the dominant medium, often in monochrome black or browns. India, Ethiopia and other countries also have long traditions. Fingerpainting with watercolor paints originated in China.
http://en.wikipedia.org/wiki/Brassica
Brassica (

/ˈbræsɨkə/ brás-si-ca) is a genus of plants in the mustard family (Brassicaceae). The members of the genus may be collectively known either as cabbages, or as mustards. Crops from this genus are sometimes called cole crops, which is derived from the Latin caulis, meaning stem or cabbage.[1]
This genus is remarkable for containing more important agricultural and horticultural crops than any other genus. It also includes a number ofweeds, both wild taxa and escapees from cultivation. It includes over 30 wild species and hybrids, and numerous additional cultivars and hybrids of cultivated origin. Most are annuals or biennials, but some are small shrubs. Due to their agricultural importance, Brassica plants have been the subject of much scientific interest. Six particularly important species (Brassica carinata, B. juncea, B. oleracea, B. napus, B. nigra and B. rapa) are derived by combining the chromosomes from three earlier species, as described by the Triangle of U theory.
The genus is native in the wild in western Europe, the Mediterranean and temperate regions of Asia. In addition to the cultivated species, which are grown worldwide, many of the wild species grow as weeds, especially in North America, South America, and Australia.

Almost all parts of some species or other have been developed for food, including the root (rutabaga, turnips), stems (kohlrabi), leaves (cabbage,kale), flowers (cauliflower, broccoli), and seeds (many, including mustard seed, and oil-producing rapeseed). Some forms with white or purple foliage or flowerheads are also sometimes grown for ornament.
Brassica species are sometimes used as food plants by the larvae of a number of Lepidoptera species—see List of Lepidoptera that feed on Brassica.

Brassica vegetables are highly regarded for their nutritional value. They provide high amounts of vitamin C and soluble fiber and contain multiple nutrients with potent anticancer properties:3,3'-diindolylmethane, sulforaphane and selenium.[citation needed] Boiling reduces the level of anticancer compounds, but steaming, microwaving, and stir frying do not result in significant loss.[2] Steaming the vegetable for three to four minutes is recommended to maximize sulforaphane.[3]
Brassica vegetables are rich in indole-3-carbinol, a chemical which boosts DNA repair in cells and appears to block the growth of cancer cells.[4][5] They are also a good source ofcarotenoids, with broccoli having especially high levels.[6] Researchers at the University of California at Berkeley have recently discovered that 3,3'-diindolylmethane in Brassicavegetables is a potent modulator of the innate immune response system with potent antiviral, antibacterial and anticancer activity;[7] however, it also is an antiandrogen.[8] These vegetables also contain goitrogens, which suppress thyroid function. This can induce hypothyroidism and goiter.[9]
Posted by Fran Hardy at 10:56 AM