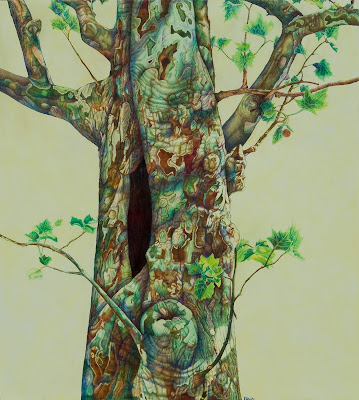 "Tahlequah Sycamore", 48" x 44", colored pencil on acrylic ground on panel
fixed and varnished, by Fran Hardy copyright
Okay so I'm obsessed with trees....I'll admit it. This one is part of an installation, that will be in an exhibit I am curating at the Mabee-Gerrer Museum of Art, that features my installations inspired by the natural world in Oklahoma and the work of the other creative individuals we interview in our documentary.
http://www.creativenativeproject.com Go to this link to see clips of shows and previews of upcoming programs. Not everything is on there but it will give you a taste. One of the things that attracts me to sycamore trees is the colorful exfoliating bark and its unique and constantly changing texture. I'm sure I will be painting more sycamores in the future. Presently I am working on a huge burnt-out cottonwood that we saw at the Nature Conservancy's Tallgrass Prairie Preserve. Bob Hamilton, Director of the preserve, called it Tree Beard, after the tree in Tolkein's book 'The Two Towers'. He saw the movie depiction of it and named this tree after one of the tree spirits. This huge tree was burnt in a controlled burn at the preserve which is essential to keeping the prairies as healthy grassland. So stay tuned and I will show you my 'Tree Beard' when he is done.
I am on the list serve of a site called "Tree World" which originates in Australia and has a lot of arborists from New Zealand and Australia that contribute and then there are the tree huggers like me. Here is a youtube link that I saw there of two huge Eucalyptus trees from New Zealand of the variety called Blackbutt. As someone who loves bark texture and gnarled form I could appreciate his scanning up and down the detail of the trees. These would be a real challenge to depict as there is so much interesting form and texture the whole length of these very tall trees. They are named the Bird Tree and the Big Fella Tree. Make sure you see the part where a man walks in front of them or you won't see the huge girth although apparently there are trees in New Zealand with a much broader girth than these two. Let's GO.......
http://www.youtube.com/watch?v=qvpJPTc-NCo
http://en.wikipedia.org/wiki/Eucalyptus
Eucalyptus (

/ˌjuːkəˈlɪptəs/)[2] is a diverse genus of flowering trees (and a few shrubs) in the myrtle family, Myrtaceae. Members of the genus dominate the tree flora of Australia. There are more than 700 species of Eucalyptus, mostly native to Australia, and a very small number are found in adjacent areas of New Guinea and Indonesia and one, Eucalyptus deglupta, ranges north to the Philippines. Only 15 species occur outside Australia, and only 9 do not occur in Australia. Species of Eucalyptus are cultivated throughout the tropics and subtropics including theAmericas, Europe, Africa, the Mediterranean Basin, the Middle East, China and the Indian Subcontinent.
Eucalyptus is one of three similar genera that are commonly referred to as "eucalypts," the others being Corymbia and Angophora. Many, but far from all, are known as gum trees because many species exude copious sap from any break in the bark (e.g. Scribbly Gum). The generic name is derived from the Greek words ευ (eu), meaning "well," and καλυπτος (kalyptos), meaning well "covered," which refers to the operculum on thecalyx that initially conceals the flower.[3]
Some Eucalyptus species have attracted attention from global development researchers and environmentalists. Such species have desirable traits such as being fast-growing sources of wood, producing oil that can be used for cleaning and functions as a natural insecticide, or an ability to be used to drain swamps and thereby reduce the risk of malaria. Outside their natural ranges, eucalypts are both lauded for their beneficial economic impact on poor populations[4][5]:22 and derided for being invasive water-suckers,[6] leading to controversy over their total impact.[7]
http://en.wikipedia.org/wiki/Platanus_occidentalis
An American sycamore tree can often be easily distinguished from other trees by its mottled exfoliating bark, which flakes off in great irregular masses, leaving the surface mottled, and greenish-white, gray and brown. The bark of all trees has to yield to a growing trunk by stretching, splitting, or infilling; the Sycamore shows the process more openly than many other trees. The explanation is found in the rigid texture of the bark tissue, which lacks the elasticity of the bark of some other trees, so it is incapable of stretching to accommodate the growth of the wood underneath and the tree sloughs it off.[1]
A sycamore can grow to massive proportions, typically reaching up to 30 to 40 meters (98 to 130 ft) high and 1.5 to 2 meters (4.9 to 6.6 ft) in diameter when grown in deep soils. The largest of the species have been measured to 51 meters (167 ft), and nearly 4 meters (13 ft) in diameter. Larger specimens were recorded in historical times. In 1770, near the junction of the Kanawha and Ohio Rivers, George Washington recorded in his journal a sycamore measuring nearly 45 feet (14 m) in circumference at 3 feet (91 cm) from the ground.[2]
The sycamore tree is often divided near the ground into several secondary trunks, very free from branches. Spreading limbs at the top make an irregular, open head. Roots are fibrous. The trunks of large trees are often hollow.
Another peculiarity is the way the leaves grow sticky, green buds. In early August, most trees in general will have—nestled in the axils of their leaves—the tiny forming bud which will produce the leaves of the coming year. The sycamore branch apparently has no such buds. Instead there is an enlargement of the petiole which encloses the bud in a tight-fitting case at the base of the petiole.[1]

The characteristic bark of an American Sycamore