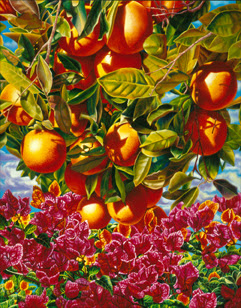 Oranges and Bougainvillea, oil over egg tempera
by Fran Hardy copyright
Private Collection NYC
Bob and I moved to Punta Gorda, Florida for seven years. I reveled in the wild, the native and the agriculture of plants and fruits from the West Indies there. My previous blog talked about some early childhood experiences there that inspired our move there. I will talk more about those in upcoming blogs as those childhood stories and experiences contributed so much to who I am as an artist and individual.
The colors are vivid like New Mexico with the sun and blue skies, but softened by the heat and humidity. Oil over egg tempera, with its luminous quality, is unequalled by any other technique and its ability to capture the wet and lush climate and vegetation in a very vivid way. It is an early renaissance technique developed by Van Eyck as oil paints were starting to be developed and used and egg tempera was lessening in favor for that reason. Van Eyck came from a family of glassmakers and this technique replicated the effect of looking through many glowing pieces of stained glass. To read an article on my use of this technique go to http://www.franhardy.com/oileggtempera.html  a feature article in American Artist magazine that shows just some of my many steps in creating a painting in this technique. You will see the article to the right of the page and can scroll through it. It is a meticulous process and contains an egg tempera underpainting with many layers of oil glaze on top. This Florida work garnered a lot of attention with 4 solo museum exhibitions in Florida and several museum shows in other regions as well as a 2001 Individual Artist Fellowship for me. 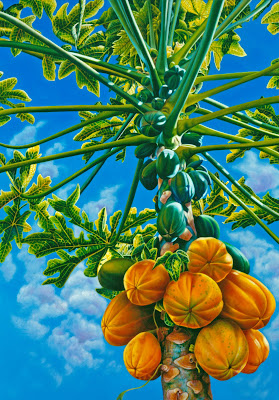 'Papaya', oil over egg tempera by Fran Hardy copyright
Private Collection NYC
I have museum catalogs from my shows of this work which can be obtained through me very inexpensively if you are interested.
http://en.wikipedia.org/wiki/Tempera
Tempera, also known as egg tempera, is a permanent fast-drying painting medium consisting of colored pigment mixed with a water-soluble bindermedium (usually a glutinous material such as egg yolk or some other size). Tempera also refers to the paintings done in this medium. Tempera paintings are very long lasting, and examples from the 1st centuries AD still exist. Egg tempera was a primary method of painting until after 1500 when it was superseded by the invention of oil painting.
The art technique was known from the classical world, where it appears to have taken over from encaustic painting[citation needed] and was the main medium used for panel painting and illuminated manuscripts in the Byzantine world and Medieval and Early renaissance Europe. Tempera painting was the primary panel painting medium for nearly every painter in the European Medieval and Early renaissance period up to 1500. For example, every surviving panel painting by Michelangelo is egg tempera.
Oil paint, which may have originated in Afghanistan between the 5th and 9th Centuries[3] and migrated westward in the Middle Ages[4]eventually superseded tempera. Oil replaced tempera as the principal medium used for creating artworks during the 15th century in Early Netherlandish painting in northern Europe. Around the year 1500, oil paint replaced tempera in Italy. In the 19th and 20th centuries there were intermittent revivals of tempera technique in Western art, among the Pre-Raphaelites, Social Realists, and others. Tempera painting continues to be used in Greece and Russia where it is the required medium for Orthodox icons.
The most common form of classical tempera painting is "egg tempera". For this form most often only the contents of the egg yolk is used. The white of the egg and the membrane of the yolk are discarded (the membrane of the yolk is dangled over a receptacle and punctured to drain off the liquid inside).
The paint mixture has to be constantly adjusted to maintain a balance between a "greasy" and "watery" consistency by adjusting the amount of water and yolk. As tempera dries, the artist will add more water to preserve the consistency and to balance the thickening of the yolk on contact with air.
Different preparations use the egg white or the whole egg for different effect. Other additives such as oil and wax emulsions can modify the medium.
http://en.wikipedia.org/wiki/Oil_paint
Oil paint is a type of slow-drying paint that consists of particles of pigment suspended in a drying oil, commonly linseed oil. The viscosity of the paint may be modified by the addition of a solvent such as turpentine or white spirit, and varnish may be added to increase theglossiness of the dried film. Oil paints have been used in Europe since the 12th century for simple decoration, but were not widely adopted as an artistic medium until the early 15th century. Common modern applications of oil paint are in finishing and protection of wood inbuildings and exposed metal structures such as ships and bridges. Its hard-wearing properties and luminous colors make it desirable for both interior and exterior use on wood and metal. Due to its slow-drying properties, it has recently been used in paint-on-glass animation. Thickness of coat has considerable bearing on time required for drying: thin coats of oil paint dry relatively quickly.
It is commonly stated and believed (although the evidence for this is extremely questionable) that today's technique of oil painting was created circa 1410 by Jan van Eyck. Though van Eyck was not the first to use oil paint, he was the first artist to have produced a siccative oil mixture which could be used to combine mineral pigments. Van Eyck’s mixture may have consisted of piled glass, calcined bones, and mineral pigments boiled in linseed oil until reaching a viscous state. Or he may have simply used Sun-thickened oils (slightly oxidized by Sun exposure). He left no written statement.
Antonello da Messina later improved oil paint: he added litharge, or lead (II) oxide. The new mixture had a honey-like consistency and increased drying properties. This mixture was known as oglio cotto—"cooked oil."
Leonardo da Vinci later improved these techniques by cooking the mixture at a very low temperature and adding 5 to 10% beeswax, which prevented darkening of the paint. Giorgione,Titian, and Tintoretto each may have altered this recipe for their own purposes.
The use of any cooked oils or Litharge (sugar of Lead) will darken an oil painting rapidly. None of the old Masters whose work survives used these in their paintings. Both ingredients became popular in the 19th century.
Since that time, experiments to improve paint and coatings have been conducted with other oils. Modern oil paints are created from bladderpod, ironweed, calendula and sandmat, plants used to increase the resistance or to reduce the drying time.

Jan van Eyck (or Johannes de Eyck) (Dutch pronunciation: [ˈjɑn vɑn ˈɛjk]) (before c. 1395 – before 9 July 1441) was a Flemish painter active in Bruges and considered one of the best Northern European painters of the 15th century.
There is a common misconception, which dates back to the sixteenth-century Vite of the Tuscan artist and biographer Giorgio Vasari, that Jan van Eyck invented oil painting. Oil painting as a technique for painting wood statues and other objects is much older, and Theophilus(Roger of Helmarshausen?) clearly gives instructions for oil-based painting in his treatise, On Divers Arts, written in 1125. It is however true that the van Eyck brothers were among the earliest Early Netherlandish painters to use it for very detailed panel paintings, and that they achieved new and remarkable effects through the use of glazes, wet-on-wet and other techniques.[1] Thus, because of his early mastery of the technique, he was traditionally known as the "father of oil painting."
Jan van Eyck has often been linked as brother to painter and peer Hubert van Eyck, because both have been thought to originate from the same town, Maaseik in Limburg (Belgium). Another brother, Lambert van Eyck is mentioned in Burgundian court documents, and there is a conjecture that he too was a painter, and that he may have overseen the closing of Jan van Eyck's Bruges workshop.[2] Another significant, and rather younger, painter who worked in Southern France, Barthélemy van Eyck, is presumed to be a relation.