Wonderment of the Badlands 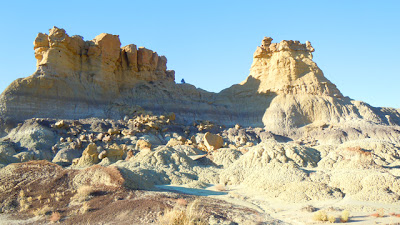 Mesa de Cuba badlands
I was overwhelmed by the otherworldly beauty of the San Juan Basin Badlands in a trip we took there with Mike Richie, journalist and photographer who has used his skills to bring attention to the need to protect these unique places. We interviewed Mike beneath a 1500 year old juniper about his decades long passion for saving the badlands. The whole day I was engulfed by a sense of wonderment as we wandered with Mike's guidance through the majestic and unbelievable beauty of the these badland landscapes. It truly felt like being on another planet besides the sense of millenniums of history expressed by the geology of this ancient land. 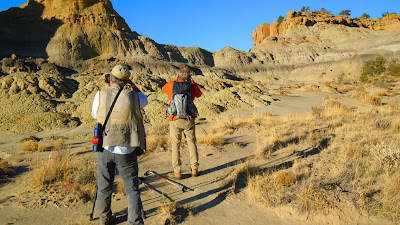 Mike had touched me years ago with his writing and photography. In 2003, I saw an article in New Mexico magazine by Mike Richie on the badlands of New Mexico. I was captivated and saved the article all these years. I saw another article by Mike in the Rio Grande Sierran all these years later about the cutting of 1200 ancient junipers in the badlands within the Rio Puerco Field Office District in Cejita Blanca and Ceja Pelon. Mike talked about how the BLM was talking about designating these places as a Special Recreation Management Area to protect them. Mike showed one of his photographs of the stump of an old growth juniper that had been cut through illegal woodcutting which was rampant with over 1200 ancient junipers cut this past year. Being passionate about ancient trees this immediately aroused my interest to include this story in our documentary "Earth Chronicles Project, The Artist's Process: New Mexico".  When I saw Mike Richie's photograph of one of the ancient junipers in an article by Norma McCallan of the Sierra Club on the BLM's draft plan to save the San Juan Basin Badlands, I knew I had to see these trees. That was my focus but then Mike showed us not only the trees which I will write about in my next blogpost with pictures of some of them but also the awesome geological wonder of these places. These photographic snapshots of mine do it scant justice but we will be showing some of Mike's photographic work along with his interview in our documentary.

Wind, erosion and geologic history have shaped these places into something that leaves one breathless with wonderment. Installations are popular now in the art world but I felt that the hand of nature had created an installation that made these artistic endeavors seem small in comparison with formations and textures that defy the imagination everywhere throughout the badlands. 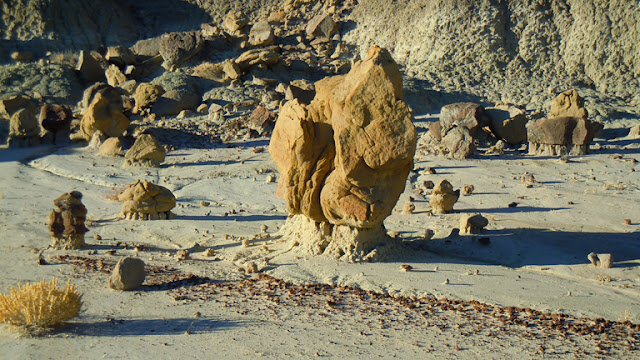 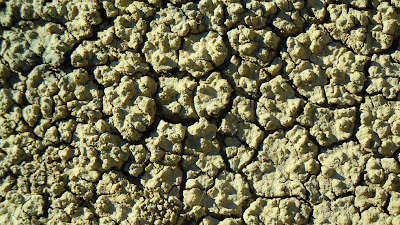 a close-up of the strange phenomenon of popcorn soil 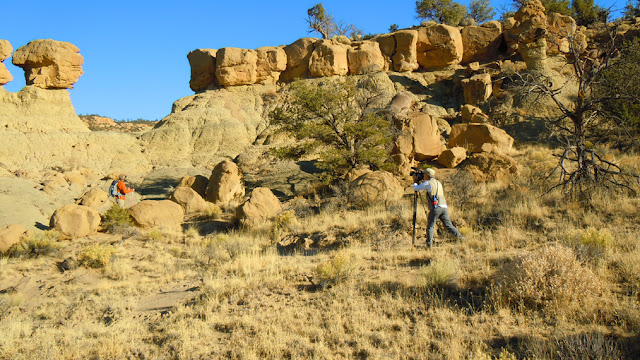 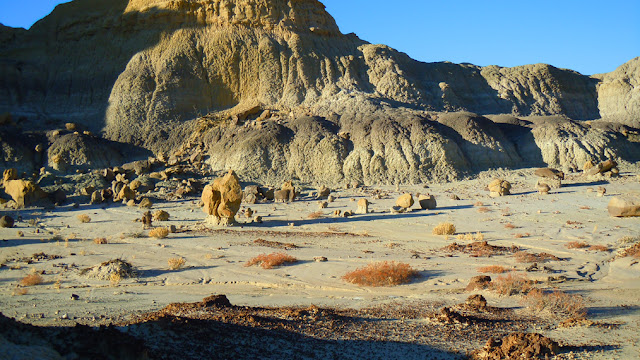 a windswept erosion pitted moonscape in the badlands
The subtlety of these places really needs to be experienced firsthand to truly appreciate them. 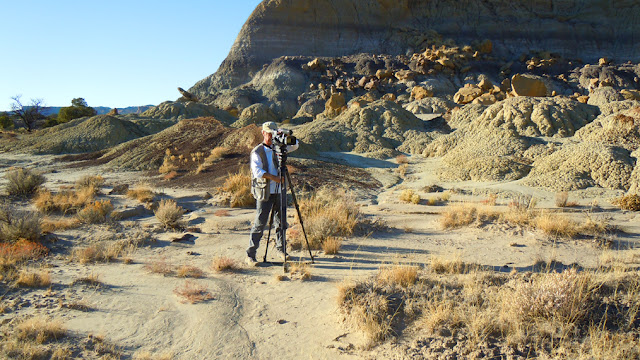 Bob shooting b-roll for our documentary 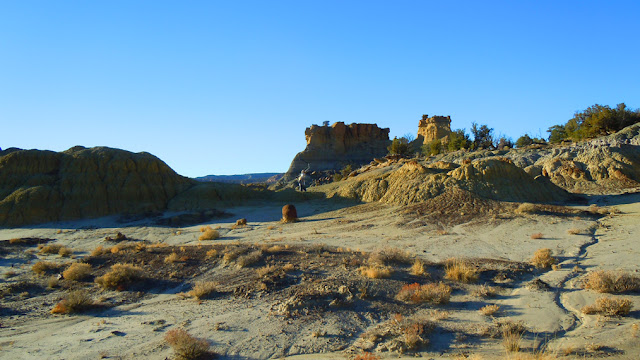 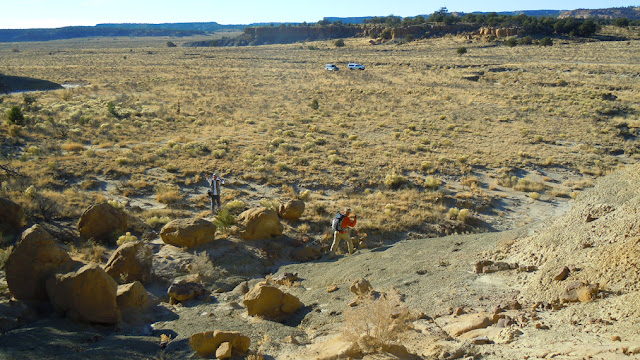 This is glimpse at the broad plain leading to the mesa with Bob and Mike dwarfed by its vastness and you can see our trucks in the distance. Being in this kind of open space opens the heart and mind to something far bigger than ourselves as humans on this planet. 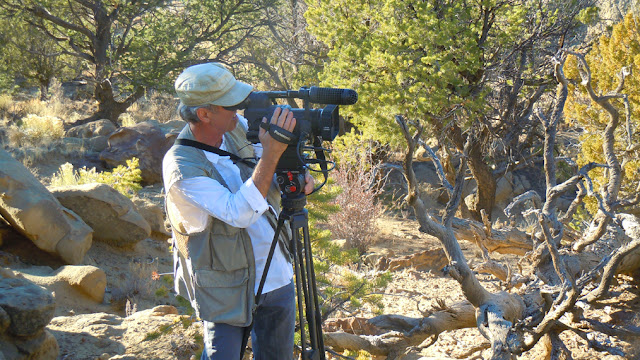 My next blogpost will be on Cejita Blanca and the wondrous ancient junipers.

To see some of my Mike Richie's photographs of the badlands across north western New Mexico go to:
http://www.phototreknm.com/
Besides Mike's wonderful photographs on his site you can read all the about the forces that formed these magical places and Mike's quest to preserve them.

http://en.wikipedia.org/wiki/San_Juan_Basin
The San Juan Basin is a geologic structural basin in the Four Corners region of the Southwestern United States; its main portion covers around 4,600 square miles (12,000 km2), encompassing much of northwestern New Mexico, southwest Colorado, and parts of Arizona and Utah.
The region is arid with rugged topography of plains and valleys interspersed by buttes, canyons and mesas. Its most striking features include Chaco Canyon(northwestern New Mexico, between Farmington and Santa Fe) and Chacra Mesa. The San Juan Basin also has uplands that exceed elevations of 9,800 feet (3,000 m). Drainage in the structural basin is general westward from the Continental Divide of the Americas to the Mancos River's confluence with the San Juan River. The San Juan River then continues to the Colorado River.[2]

The San Juan structural basin is a large downwarp of sedimentary rocks of mostly Mesozoic age. As a geologic region, the San Juan Basin is noted for its large deposits of coal, uranium, and natural gas. Since the 1980s, the Fruitland Formation in the basin has been one of the major US sources of coalbed methane. In 2007, the San Juan Basin produced 1.32 trillion cubic feet of natural gas, making it the largest source of natural gas in the United States.[3] Uranium mining in New Mexico is also performed from the San Juan Basin.

Mike offers hikes and classes in the badlands. Here is a link to one of them.
http://dcereg.com/index.cfm?method=ClassInfo.ClassInformation&int_class_id=51469&int_category_id=18&int_sub_category_id=183

A hoodoo (also called a tent rock, fairy chimney, and earth pyramid) is a tall, thin spire of rock that protrudes from the bottom of an arid drainage basin or badland. Hoodoos, which can range from 5-150 feet tall (1.5-45 meters), typically consist of relatively soft rock topped by harder, less easily eroded stone that protects each column from the elements. They generally form within sedimentary rock and volcanic rock formations.[citation needed]
Hoodoos are found mainly in the desert in dry, hot areas. In common usage, the difference between hoodoos and pinnacles or spires is that hoodoos have a variable thickness often described as having a "totem pole-shaped body." A spire, on the other hand, has a smoother profile or uniform thickness that tapers[clarification needed] from the ground upward. An example of a single spire, as an earth pyramid, is found at Aultderg Burn, near Fochabers, Scotland.
Hoodoos range in size from that of an average human to heights exceeding a 10-story building. Hoodoo shapes are affected by the erosional patterns of alternating hard and softer rock layers. Minerals deposited within different rock types cause hoodoos to have different colors throughout their height.
These badlands have been given wilderness protection by the BLM. They are worth the time and effort to drive to, see and hike them. These were once an ancient sea and one gets that feeling often in New Mexico with our vast plains and valleys studded with rock formations and geologic uplift and surrounded by mesas.
http://en.wikipedia.org/wiki/Bisti/De-Na-Zin_Wilderness
The Bisti/De-Na-Zin Wilderness is a 45,000-acre (18,000 ha) wilderness area located in San Juan County in the U.S. state of New Mexico. Established in 1984, the Wilderness is a desolate area of steeply eroded badlands managed by the Bureau of Land Management, with the exception of three parcels of private Navajo land within its boundaries. [1]
Translated from the Navajo word Bistahí, Bisti means "among the adobe formations."[2] De-Na-Zin takes its name from the Navajo words for "cranes."Petroglyphs of cranes have been found south of the Wilderness.
The area that includes the Bisti/De-Na-Zin Wilderness was once covered by an ancient sea, the Western Interior Seaway. As the water slowly receded, prehistoric animals survived on the lush foliage that grew along the many riverbanks. When the water disappeared it left behind a 1,400-foot (430 m) layer of jumbled sandstone, mudstone, shale, and coal that lay undisturbed for 50 million years. 6,000 years ago the last ice age receded, exposingfossils and petrified wood, and eroding the rock into the hoodoos now visible.[1]
Humans have occupied the area almost continuously since 10,000 BC. The area contains numerous Chacoan sites and part of the prehistoric Great North Road, used to connect major Chacoan Anasazi sites in the San Juan Basin.