Part Two: 'Near Death Experience' on the rocks in the Wichita Mountains 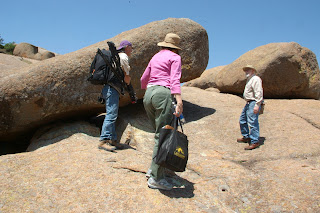 Bob, Katherine and Jack climbing the rocks in the Wichita Mountains.
They can be very steep and sometimes slick.
We arranged to interview Katherine Liontas-Warren in the Wichita Mountains which are a great source of inspiration for her magnificent drawings and prints. She is also a very dedicated professor at Cameron University in Lawton, Oklahoma and brought along her friend and former department chair Jack Bryan. They like to go into the mountains and draw together both drawing great inspiration from their environment. Jack is a native Oklahoman with a very different style and interpretation of the same subject matter from Katherine. http://www.katherineliontas.com

This is one of Jack's loose painterly interpretation of the Wichita Mountains. http://www.artistjackbryan.com/ Bob shooting while Jack observes high up on the rocks 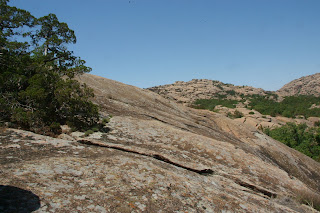 One of the vistas from the rocks 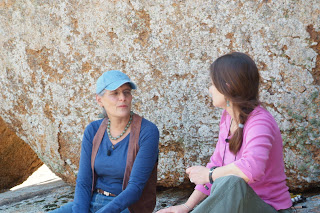 After shooting me interviewing Katherine, Bob and Jack took off to find a good spot to shoot us from above. While Katherine and I chatted, unbeknownst to us Bob and Jack were climbing some very steep rocks. Bob was carrying his camera and they were jumping from rock to rock to find a good viewpoint above us. They did a second steep jump between two rocks and because Bob had the camera and the jump was wide he began to lose his footing and was finally able to break his fall by using his camera (the only alternative) which broke off the plastic cover for the record light. Then the challenge was how to get back after they realized that the mission to get above us was too dangerous. Jack went a different way back and Bob used his hands in what he called a 'spider grip' to find his way back. Meanwhile they were each worrying about each other and returned very shaken. The broken part of the camera will figure in a future story. Ironically Katherine and I were unaware of the danger they were in. 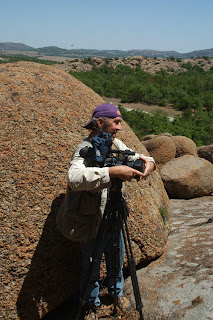 This reminds me of long ago when Bob and I lived on a beautiful farm in western Pennsylvania with a steep hill behind the farm as we lived in the valley. I was in my huge organic garden trying to weed whack the grass paths between my beds. I find weed whackers, infernal combustion machines, and creators of great frustration. As it was not working I was throwing it around the garden in frustration uttering a string of curse words which Bob could hear as he was up on the hill trying to mow our brush with our tractor and brush hog. The tractor began to slip down the hill. Tractors by the way are the source of many deaths. He could have died up there crushed by the tractor which was starting to tip were he not caught by a multiflora rose bush which held the tractor and gave him time to jump off. Multiflora which is an invasive plant is the bane of farmer's existence but in this case it was a life saver. We had to get a truck tow to get the tractor our which cost about $500 but the most important part is that Bob was okay. How bizarre that I was caught up in my frustration with the weed whacker below and while Bob watched his life slip before him he could hear my cursing from below. Irony......
.
http://en.wikipedia.org/wiki/Rosa_multiflora

Rosa multiflora (Multiflora Rose, Baby Rose, Rambler Rose) is a species of rose native to eastern Asia, in China, Japan and Korea.
It is a scrambling shrub climbing over other plants to a height of 3–5 m, with stout stems with recurved thorns (sometimes absent). The leaves are 5–10 cm long, compound, with 5-9 leaflets and feathered stipules. The flowers are produced in large corymbs, each flower small, 1.5–4 cm diameter, white or pink, borne in early summer. The hips are reddish to purple, 6–8 mm diameter.
Two varieties are accepted by the Flora of China:
In eastern North America, Multiflora Rose is now generally considered an invasive species, though it was originally introduced from Asia as a soil conservation measure, as a natural hedge to border grazing land, and to attract wildlife. It is readily distinguished from American native roses by its large inflorescences, which bear multiple flowers and hips, often more than a dozen, while the American species bear only one or a few on a branch.
Some places classify Multiflora rose as a "noxious weed" [1]. In grazing areas, this rose is generally considered to be a serious pest, though it is considered excellent fodder for goats.
http://www.nps.gov/plants/alien/fact/romu1.htm
NATIVE RANGE
Japan, Korea, and eastern China
DESCRIPTION
Multiflora rose is a thorny, perennial shrub with arching stems (canes), and leaves divided into five to eleven sharply toothed leaflets. The base of each leaf stalk bears a pair of fringed bracts. Beginning in May or June, clusters of showy, fragrant, white to pink flowers appear, each about an inch across. Small bright red fruits, or rose hips, develop during the summer, becoming leathery, and remain on the plant through the winter.
ECOLOGICAL THREAT
Multiflora rose is extremely prolific and can form impenetrable thickets that exclude native plant species. This exotic rose readily invades open woodlands, forest edges, successional fields, savannas and prairies that have been subjected to land disturbance.
DISTRIBUTION IN THE UNITED STATES
Multiflora rose occurs throughout the U.S., with the exception of the Rocky Mountains, the southeastern Coastal Plain and the deserts of California and Nevada.
BACKGROUND
Multiflora rose was introduced to the East Coast from Japan in 1866 as rootstock for ornamental roses. Beginning in the 1930s, the U.S. Soil Conservation Service promoted it for use in erosion control and as "living fences" to confine livestock. State conservation departments soon discovered value in multiflora rose as wildlife cover for pheasant, bobwhite quail, and cottontail rabbit and as food for songbirds and encouraged its use by distributing rooted cuttings to landowners free of charge. More recently, multiflora rose has been planted in highway median strips to serve as crash barriers and to reduce automobile headlight glare. Its tenacious and unstoppable growth habit was eventually recognized as a problem on pastures and unplowed lands, where it disrupted cattle grazing. For these reasons, multiflora rose is classified as a noxious weed in several states, including Iowa, Ohio, West Virginia, and New Jersey.
BIOLOGY & SPREAD
Multiflora rose reproduces by seed and by forming new plants that root from the tips of arching canes that contact the ground. Fruits are readily sought after by birds which are the primary dispersers of its seed. It has been estimated that an average multiflora rose plant may produce a million seeds per year, which may remain viable in the soil for up to twenty years. Germination of multiflora rose seeds is enhanced by passing through the digestive tract of birds.
The only thing I will say FOR multiflora rose is that it saved Bob's life as well as making our whole farm redolent with the smell of roses for three weeks and we had an incredible birdsong  as it protected them in it's mass of huge thorny bushes. Farmers feel that the thorns can puncture tractor tires.