James Day posted a beautiful article on my work with trees on his blog. Please  share and comment on his blog. thanks, Fran   http://artofday.com/wordpress/?p=4237

So here is a tree which is fairly straight and not gnarly like so many of the trees that inspire me. It is a virgin Ponderosa Pine from  the history grove in Valles Caldera, a lush and spectacular landscape in the Jemez Mountains which was the site of a volcanic eruption in the past. Links and info on Valles Caldera at the bottom of this blog. It is a spectacular place to visit. 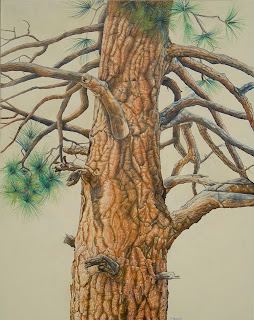 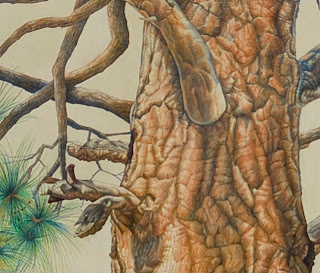 detail of 'Ponderosa Pine' by Fran Hardy copyright
Hug this tree and put you nose up against the bark and inhale deeply and you will smell the rich, tasty scent of vanilla.
I got this funny email from Quintus Herron who does sustainable forestry in McCurtain County, Oklahoma. We have several previous blogs on his preservation work, sustainable forestry and support of the arts.
To translate: He calls my propensity to be attracted to the twisty and gnarly trees that have been exposed to harsh elements, 'The Fran Trees' as opposed to the straight trees that he fosters for lumber. And if you have shopped for lumber lately you would be grateful to have access to Herron Lumber as so many
2x4s etc are completely twisted.
Fran,

Enjoyed your drawings of "Fran Trees".
My Mary would have loved them.
How do you like my pix of "Q Trees"?

Quintus
I wish I had some control over the picture size but if the blog will allow me to resize pictures I haven't found out how yet. Here is the lettering description on the photo......

I hope you don't mind me posting this Quintus. Writers and now bloggers use all their friends and aquaintences as fodder for their writing. Many a relationship has gone south over friends and family realizing that they are the inspiration for various 'fictional' characters and many may not find it overly flattering even though names may have been changed to supposedly protect the innocent. We all draw from our experience so beware if your 'friend ' is a writer. Anyway this only shows Quintus's wonderful sense of humor so I don't think he'll mind!
This is an email from another long time friend who has known me since I first started painting seriously who waxes eloquent on a dead tree that he loves. I was going to remove the complimentary paragraph at the bottom but a little ego helps artists a great deal. Not always easy for those of us who tend toward modesty but a great boost for promoting oneself.
If you have anything to say about trees, poems, essays, music on youtube anything...email me at franhardy@earthlink.net and it may be included in a future blog.
Fran,

There is an old dead pine tree, probably a white pine, back of my house. It must be sixty feet with a few branches left on trunk.  The crows, the doves, and many other birds sit up there for short times. One of these days it will topple and the way it leans, it will go away from my home.  Pileated woodpeckers have drilled it again and again looking for  the juicy grubs that feast on the wood and in turn are feasted upon. Bark is pealed off but some is left.  Nuthatches have dug out nest holes but with its present condition, I doubt if any birds nest within -- instinct tells them it is too flimsy for a brood of babies.

That tree is not nearly so beautiful as those you have painted.  But the idea is the same -- there is both history and life in old deceased trees. You have captured this and within your trees there are  streams of fairy tales woven into the bark.  How much your painting has progressed over the years -- in technique and in subject.  Excellent work, Fran.  Tom Acker, S.J.
http://en.wikipedia.org/wiki/Pinus_ponderosa
Pinus ponderosa, commonly known as the Ponderosa Pine, Bull Pine, Blackjack Pine,[1] or Western Yellow Pine, is a widespread and variable pine native to western North America. It was first described by David Douglas in 1826, from eastern Washington near present-day Spokane.

Pinus ponderosa is a dominant tree in the Kuchler plant association, the Ponderosa shrub forest. Like most western pines, the ponderosa is associated with mountainous topography. It is found on the Black Hills and on foothills and mid-height peaks of the northern, central and southern Rocky Mountains as well as theCascades and Sierra Nevada, and the Maritime Coast Range Ponderosa Pine forests.
The Ponderosa Pine has a very distinct bark. Unlike most conifers, it has an orange bark, with black lining the crevasses, where the bark "splits". This is most noticeable amongst older Ponderosa Pines. The bark has a pleasant, sweet smell reminiscent of baking cookies.[2] The tree can often be identified by its characteristic long needles that grow in tufts of three. Its needles are also the only known food of the caterpillars of the gelechiid moth Chionodes retiniella.

The National Register of Big Trees lists a Ponderosa Pine that is 235 ft (72 m) tall and 324 in (820 cm) in circumference.[3]In January 2011, a Pacific Ponderosa Pine in Siskiyou National Forest in Oregon was measured with a laser to be 268.35 ft (81.79 m) high. The measurement was performed by Michael Taylor, and Mario Vaden, a professional arborist from Oregon.[4][5] This Ponderosa Pine is now the tallest known pine. The previous tallest known pine was a Sugar Pine.

Modern forestry research identifies four different taxa of Ponderosa Pine, with differing botanical characters and adapted to different climatic conditions. These have been termed "geographic races" in forestry literature, while some botanists historically treated them as distinct species. In modern botanical usage, they best match the rank of subspecies, but not all of the relevant botanical combinations have been formally published.
http://www.vallescaldera.gov/
http://en.wikipedia.org/wiki/Valles_Caldera
Valles Caldera (or Jemez Caldera), is a 12 mi (19 km) wide volcanic caldera in the Jemez Mountains of northern New Mexico. Within its caldera, Valle Grande(local /ˈvaɪ.eɪ ˈɡrɑːndeɪ/ vy-ay grahn-day) is the largest valle (grass valley) and the only one with a paved road.

Until recently[when?], the Valles Caldera was part of the Baca Ranch. The Dunigan family sold the entire surface estate of 95,000 acres (380 km2) and seven-eighths of the geothermal mineral estate to the federal government.

On July 25, 2000, the Valles Caldera Preservation Act, 16 U.S.C. Sections 698v-698v-10, created the Valles Caldera National Preserve, Santa Fe National Forest. The careful husbandry of the Baca Ranch by its private owners, including selective logging, limited grazing and hunting, and the use of prescribed fire, had preserved a mix of healthy range and timber land with significant biodiversity, including New Mexico's largest herd of elk, and served as a model for self-sustaining land development and use.[2] Funds for the purchase came from the Land and Water Conservation Fund derived from royalties the US government receives from offshorepetroleum and natural gas drilling.[3] Under the terms of the Act, the Preserve will have to produce sustaining income; environmentalists had lobbied for the more inclusive protections of National Park status instead. The preserve is located in northeastern Sandoval County and southern Rio Arriba County, just west of Los Alamos. It has a land area of 89,716 acres (140.18 sq mi, or 363.07 km2).[4] It is administered from the offices of the Valles Caldera Trust in Jemez Springs.

Satellite image of Valle Caldera.
Valles Caldera is one of the smaller volcanoes in the supervolcano class. The circular topographic rim of the caldera measures 19 kilometers (12 miles) in diameter. The caldera and surrounding volcanic structures are the most thoroughly studied caldera complex in the United States. Research studies have concerned the fundamental processes of magmatism, hydrothermal systems, and ore deposition. Nearly 40 deep cores have been examined, resulting in extensive subsurface data.
The Valles Caldera is the younger of two calderas known at this location, having collapsed over and buried the Toledo Caldera, which in turn may have collapsed over yet older calderas. The associated Cerros del Rio volcanic field, which forms the eastern Pajarito Plateau and the Caja del Rio, is older than the Toledo Caldera. These two large calderas formed during eruptions 1.47 million and 1.15 million years ago.[5] The Caldera and surrounding area continue to be shaped by ongoing volcanic activity. The El Cajete Pumice, Battleship Rock Ignimbrite, Banco Bonito Rhyolite, and the VC-1 Rhyolite were emplaced during the youngest eruption of Valles caldera, about 50,000–60,000 years ago. Seismic investigations show that a low-velocity zone lies beneath the caldera, and an active geothermal system with hot springs andfumaroles exists today.[1]
The volcanic properties of the Valles Caldera make it a likely source for renewable and nonpolluting geothermal energy. However, some people oppose development of the geothermal energy, considering it destructive to scenic beauty and recreational and grazing use.[6][7]
The lower Bandelier tuff which can be seen along canyon walls west of the Valles Caldera, including San Diego Canyon, is related to the eruption and collapse of the Toledo Caldera. The upper Bandelier tuff is believed to have been deposited during eruption and collapse of the Valles Caldera. The now eroded and exposed orange-tan, light-colored Bandelier tuff from these events creates the stunning mesas of the Pajarito Plateau.
These calderas and associated volcanic structures lie within the Jemez Volcanic Field. This volcanic field lies above the intersection of the Rio Grande Rift, which runs north-south through New Mexico, and the Jemez Lineament, which extends from southeastern Arizona northeast to western Oklahoma. The volcanic activity here is related to the tectonic movements of this intersection.

A number of recreational and/or historical uses take place in the Valles Caldera. Many of these uses involve trails. Valles Caldera has many miles of ranch roads and livestock and game trails. These include a network of trails currently designated for horse riding.[8][9][10] Historically, Valles Caldera was a location for equestrian endurance races. After establishment of VCNP the first race in the caldera was held in 2009. The largest grass valley, Valle Grande, is a venue for ski orienteering. Activities are open to the public, though some require reservations. Customer service and concierge services are provided by the Public Lands Interpretive Association.

Mule resting in Valle Jaramillo during an endurance race; trees in the background lack lower branches due to browsing.
Throughout the caldera the grass valleys appear groomed: there are few saplings and mature trees lack lower branches. This is due to heavy browsing by elk and cattle. Although the grass appears abundant, it is a limited resource. Its growing season is short, it feeds thousands of cattle in the summer and more thousands of elk all year, and during most of the year its nutritional value is low.

Exterior "town" set in Valle Grande.
Valles Caldera has provided several filming locations,[11] most for films in the Western genre. Some of these locations include exterior sets, such as the weathered "ranch house" that can be seen from the highway in Valle Grande, and a small "town".