An Inside Look: My Process in the Studio 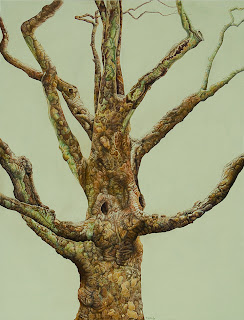 Tippy's Dogwood by Fran Hardy copyright
colored pencil on acrylic ground, fixed and varnished
Today I will give you an inside look at my process in the studio as I begin on my installation for the Creative-Native Project exhibition at the Mabee-Gerrer Museum of Art in Shawnee, Oklahoma.
The tree above is not for the show as it is a dogwood from Long Island but it was the piece where I was most excited about portraying the bark with all it's variegated surface and color. I got lost in it as an abstract pattern and then pulled it all together by creating the light and shadow. This dramatic lighting or chiaroscuro is what makes it magical and creates drama. I also loved the wonderful branching elegance of this tree. 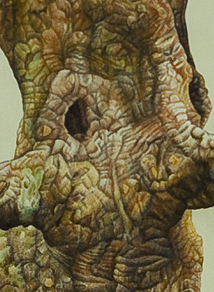 Here is a detail of the bark and form in Tippy's Dogwood
When we got back from the intensive three week filming schedule in Oklahoma I luckily had "Great Smokies", a moss covered tree from none other than the Great Smokies and my time there to complete.
It is good to come back to something in progress that is going well after being away from the studio for so long. No matter how many years I do this, there is always trepidation on beginning a new piece.
So here are some shots of my sycamore tree in progress for the Oklahoma show with more great peeling, discolored bark to get lost in. I will keep you posted as it evolves. This sycamore was in the woodland at the Closer to the Earth gardening program we visited on our last day of shooting in Oklahoma. Go to past blogs to read about their inspirational story. I found huge sycamores when I lived in the Ozarks along the creek bottoms. They were allowed to remain when the loggers came through as they were not considered suitable for lumber. The Ozarks and Ouachita Mountains are in Oklahoma as well as Arkansas. When I go back I will look for more venerable sycamores.
Here is the sycamore in progress and some closeups of areas of bark. In future blogs you will see the anatomy of  this tree coming to be on panel and my working process as well as the other pieces I will be doing for the exhibition in conjunction with our documentary. http://creativenativeproject.com 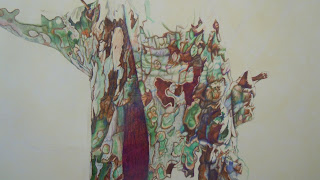 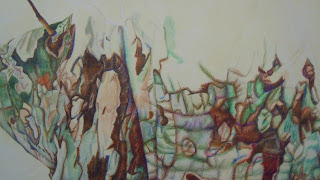 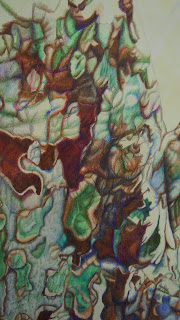 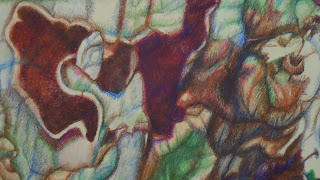 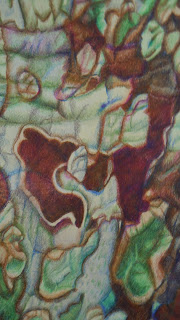 http://en.wikipedia.org/wiki/Ouachita_Mountains
The Ouachita Mountains (pronounced /ˈwɒʃɨtɔː/ wosh-i-taw)[1] are a mountain range in west central Arkansas and southeastern Oklahoma. The range's subterranean roots may extend as far as central Texas, or beyond it to the current location of the Marathon Uplift. Along with the Ozark Mountains, the Ouachita Mountains form the U.S. Interior Highlands, the only major mountainous region between the Rocky Mountains and the Appalachian Mountains.[2][3] The highest peak in the Ouachitas is Mount Magazine in west-central Arkansas which rises to 2,753 feet (839 m).
The Ouachita Mountains are a physiographic section of the larger Ouachita province (which includes both the Ouachita Mountains and the Arkansas Valley), which in turn is part of the larger Interior Highlands physiographic division.[4]
The Ouachita Mountains are fold mountains like the Appalachian Mountains to the east, and were originally part of that range. During the Pennsylvanian part of theCarboniferous period, about 300 million years ago, the coastline of the Gulf of Mexico ran through the central parts of Arkansas. As the South American plate drifted northward, a subduction zone was created in this region. The South American oceanic crust was forced underneath the less-dense North American continental crust. Geologists call this collision the Ouachita orogeny. The collision buckled the continental crust, producing the fold mountains we call the Ouachitas. At one time the Ouachita Mountains were very similar in height to the current elevations of the Rocky Mountains. Because of the Ouachitas' age, the craggy tops have eroded away, leaving the low formations that used to be the heart of the mountains.
Unlike most other mountain ranges in the United States, the Ouachitas run east and west rather than north and south. Also, the Ouachitas are distinctive in that volcanism, metamorphism, and intrusions are notably absent throughout most of the system.
The Ouachitas are noted for quartz crystal deposits around the Mount Ida area and for renowned Arkansas novaculite whetstones. This quartz was formed during the Ouachita orogeny, as folded rocks cracked and allowed fluids from deep in the Earth to fill the cracks.
The Ouachita Mountain area of Arkansas is dominated by Cambrian through Pennsylvanian clastic sediments, with the lower Collier formation in the core of the range and the Atoka formation on the flanks. The Atoka Formation, formed in the Pennsylvanian Period, is a sequence of marine, mostly tan to gray silty sandstones and grayish-black shales. Some rare calcareous beds and siliceous shales are known.[5] The Collier sequence is composed of gray to black, lustrous shale containing occasional thin beds of dense, black, and intensely fractured chert. An interval of bluish-gray, dense to spary, thin-bedded limestone may be present. Near its top, the limestone is conglomeratic and pelletoidal, in part, with pebbles and cobbles of limestone, chert, meta-arkose, and quartz. It was formed during the Late Cambrian.[5]
http://en.wikipedia.org/wiki/The_Ozarks
The Ozarks (also referred to as Ozarks Mountain Country, the Ozark Mountains, and the Ozark Plateau) are a physiographic and geologic highland region of the central United States. It covers much of the southern half of Missouri and an extensive portion of northwestern and north central Arkansas. The region also extends westward into northeastern Oklahoma and extreme southeastern Kansas. The wooded hills of southwest Illinois, though commonly called the "Illinois Ozarks," are generally not considered part of the true Ozarks.
Although referred to as the Ozark Mountains, the region is actually a high and deeply dissected plateau. Geologically, the area is a broad dome around the Saint Francois Mountains. The Ozark Highlands area, covering nearly 47,000 square miles (122,000 km2), is by far the most extensive mountainous region between the Appalachiansand the Rocky Mountains. Together, the Ozarks and Ouachita Mountains form an area known as the U.S. Interior Highlands, and are sometimes referred to collectively. For example, the ecoregion called Ozark Mountain Forests includes the Ouachita Mountains, although the Arkansas River valley and the Ouachitas, both south of theBoston Mountains, are not usually considered part of the Ozarks.
http://en.wikipedia.org/wiki/Pencil
Coloured pencils, or pencil crayons
These have wax-like cores with pigment and other fillers. Multiple colours are often blended together.[39]
http://en.wikipedia.org/wiki/Drawing
Drawing is a visual art that makes use of any number of drawing instruments to mark a two-dimensional medium. Common instruments include graphite pencils, pen and ink, inked brushes, wax color pencils, crayons, charcoals, chalk, pastels, markers, stylus, or various metals like silverpoint. An artist who practices or works in drawing may be referred to as a draughtsman or draftsman.
A small amount of material is released onto the two dimensional medium which leaves a visible mark—the process is similar to that of painting. The most common support for drawing is paper, although other materials such as cardboard, plastic, leather, canvas and board, may be used. Temporary drawings may be made on ablackboard or whiteboard, or indeed almost anything. The medium has been a popular and fundamental means of public expression throughout human history. The relative ease of availability of basic drawing instruments makes drawing more universal than most other media.
http://en.wikipedia.org/wiki/Chiaroscuro
Chiaroscuro (English pronunciation: /kiˌɑrəˈskjʊəroʊ/, Italian: [kjarosˈkuːro] "light-dark") in art is characterized by strong contrasts between light and dark, usually bold contrasts affecting a whole composition. It is also a technical term used by artists and art historians for using contrasts of light to achieve a sense of volume in modelling three-dimensional objects such as the human body.
Further specialized uses include chiaroscuro woodcut, for coloured woodcuts printed with different blocks, each using a different coloured ink; and chiaroscuro drawing for drawings on coloured paper with drawing in a dark medium and white highlighting. Similar effects in the lighting of cinema and photography are also chiaroscuro.

They also survived in rather crude standardized form in Byzantine art and were refined again in the Middle Ages to become standard by the early fifteenth-century in painting and manuscript illumination in Italy and Flanders, and then spread to all Western art. The Raphael painting illustrated, with light coming from the left, demonstrates both delicate modelling chiaroscuro to give volume to the body of the model, and also strong chiaroscuro in the more common sense in the contrast between the well-lit model and the very dark background of foliage. However, to further complicate matters, the compositional chiaroscuro of the contrast between model and background would probably not be described using this term, as the two elements are almost completely separated. The term is mostly used to describe compositions where at least some principal elements of the main composition show the transition between light and dark, as in the Baglioni and Geertgen tot Sint Jans paintings illustrated above and below.The more technical use of the term chiaroscuro is the effect of light modelling in painting, drawing or printmaking, where three-dimensional volume is suggested by the value gradation of colour and the analytical division of light and shadow shapes - often called "shading". The invention of these effects in the West, "skiagraphia" or "shadow-painting" to the Ancient Greeks, was traditionally ascribed to the famous Athenian painter of the 5th century BC, Apollodoros. Although virtually no Ancient Greek painting survives, their understanding of the effect of light modelling can still be seen in the late 4th century BC mosaics of Pella, Macedonia, in particular the Deer Hunt, in the House of the Abduction of Helen, inscribed gnosis epoesen, or 'knowledge did it'.
Chiaroscuro modelling is now taken for granted, but had some opponents; the English portrait miniaturist Nicholas Hilliard cautioned in his treatise on painting against all but the minimal use we see in his works, reflecting the views of his patron Queen Elizabeth I of England:"seeing that best to show oneself needeth no shadow of place but rather the open light...Her Majesty..chose her place to sit for that purpose in the open alley of a goodly garden, where no tree was near, nor any shadow at all..."[4]
In drawings and prints hatching, or shading by parallel lines, is often used to achieve modelling chiaroscuro. Washes, stipple or dotting effects, and "surface tone" in printmaking are other techniques.