Part Four of the challenges of documentary making, Cleopatra's Gift to Women and What to Do when it Rains????? 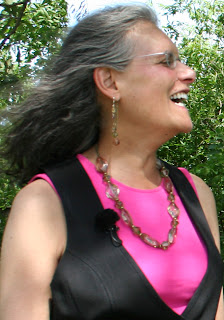 So would you know I had a horrible sunburn with dark scabs, blisters and peeling in this still from our filming??? My sister, Joan says makeup is Cleopatra's great gift to women. As I said on a previous post I have lyme disease and am on a lot of drugs some of which make me EXTREMELY sun-sensitive. I believe the doxycycline is one of the main ones. Being an olive complected gal I have never had to worry about it and as Bob says I tan in a closet. Although now that I am older and wiser I wish I had protected myself more anyway. BUT before I realized it with the first day of sun exposure at our first location strange red blotches appeared on my face and hands despite sunscreen and a baseball cap which blistered, peeled and scabbed in a 'most appealing fashion'. I am amazed at how the makeup covered all of it or it would have looked like the Fran Monster show on the documentary and yes thank you now that I am being careful and the application of Burt's Bees Sun Soother which I highly recommend it is healed. http://www.burtsbees.com See how Burt's Bees came to be at the bottom of this blog page.
Delaynna Trim, the Curator of the Collections at the Mabee-Gerrer Museum of Art gave me some of those white gloves they use to handle art as my hands were just burning and it hurt to touch anything and I went to a big box store and got the  black rock star chapeau and we tried to keep me in the shade as much as possible.
Television, movies, fashion etc however always rely on makeup and stars have their bevy of makeup artists that travel with them and keep them touched up at all times. I bring my makeup kit everywhere on the shoots now. I was always such an 'au natural' person this is funny for me. 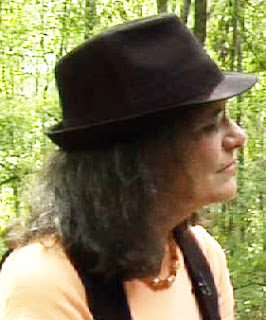 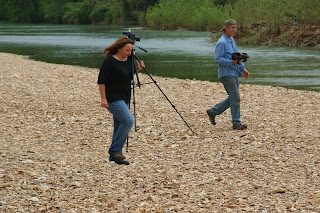 The weather was generally quite cooperative except for drought conditions at some of our locations. But Kim Baker, conservation photographer emailed us to let us know that the Illinois River had had a 500 year flood before we left for Oklahoma but she still planned to have her three day Illinois River Survey event  near Tahlequah as that did not begin until May 20th. You can read all about it in previous blogsposts. We were going to interview her in her canoe on the river but when the scheduled day arrived
it just kept pouring and we knew we had to 'think on our feet' as usual and we interviewed her at the headquarters for the Oklahoma Scenic Rivers Commission and then will be inserting a lot of her photographs for what we call b-roll. Actually I think this will make a more interesting segment and give her  beautiful work a lot more exposure. We did get a very brief halt in the rain and Kim took us to two beautiful spots on the river. I love the microscopic worlds that were living on these rocks on the shore line like little tidal pools. So if you get lemons, make lemonade and it might even turn out more dynamic than the original plan. 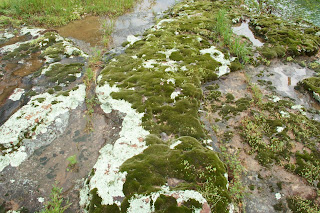 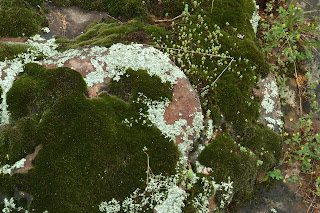 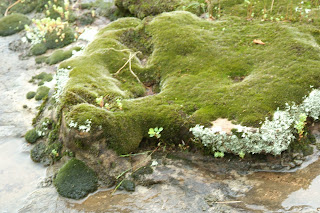 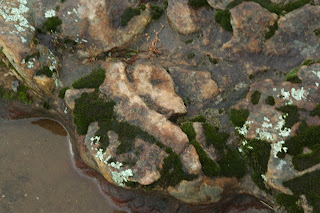 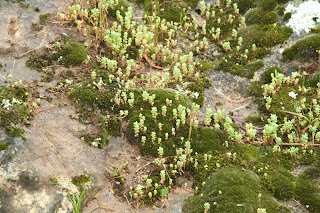 http://en.wikipedia.org/wiki/Illinois_River_(Arkansas)
The Illinois River is a 145-mile-long (233 km)[1] tributary of the Arkansas River in the U.S. states of Arkansas and Oklahoma. The Illinois River, seen here in the upper stretches of Tenkiller Ferry Lake, is scenic and popular for float trips and fishermen.
It rises in the Ozark Mountains in the northwest corner of Arkansas, in Washington Countysouthwest of Fayetteville, near the town of Hogeye. It flows west into northeast Oklahoma, then southwest and south through the mountains of eastern Oklahoma, past Scraper andTahlequah. South of Tahlequah, it passes through the reservoir Tenkiller Ferry Lake. It joins the Arkansas at Gore, approximately 20 miles (32 km) southeast of Muskogee. Together with its tributary streams, it has a drainage area of 900 square miles (2,300 km2). The town of Tahlequah on its banks was the western terminus of the Trail of Tears.
The river is a major source of tourism in the area. In 1999, it was estimated to have brought in approximately 500,000 tourists and $9 million to the Oklahoma section of the river.
The upper section is a designated scenic river and home to many native species of bass with spring runs of white bass. It is a popular summertime destination for floaters. The lower section, below Tenkiller Dam, is a designated year-round trout stream, stocked with Rainbow and Brown Trout. The state record rainbow trout was caught in the cold tailwater of the dam.
The river is currently the source of a controversy between the two states, with Oklahoma blaming Arkansas for pollution in the river, most notoriously phosphorus contamination by sewage and poultry farm runoff. In December 2003, an agreement was reached between the two states, with Arkansas agreeing to reduce phosphorus output from its waste water treatment plants by 75% over the next ten years, although it does not address poultry-farm runoff.
For more information on Oklahoma Scenic Rivers and the Scenic Rivers Commission who works very hard to protect their rivers go to this link.  http://www.oklahomascenicrivers.net/

The Unusual Story of Burt's Bees: Minding Our Own Beeswax

I guess you could say it all started because there weren't many jobs up there north of Bangor. Though we found, grew, or traded for most of what we needed, I figure a person's got to have at least $3,000 a year in actual greenbacks to survive in this old world, especially if you've got kids. I'd been let go from my last three part-time waitressing jobs and had been buying low and selling high at yard sales and flea markets, which brought in about $150 a week during good weather.
Burt was enjoying similar commercial success selling quarts of honey off the tailgate of his pick-up truck every weekend between the Fourth of July and hunting season, from a parking lot over in Dexter. He'd been keeping bees around there for a dozen years or more, and had a right nice homestead up on the hill near Garland. Thirty hives, a flock of chickens, Pony and the 8' x 8' turkey coop he'd hauled off from a neighbor's place that he remodeled and lived in were about all he needed.
The money he made selling honey mostly paid for his property taxes and gas for the pick-up, and it was just about enough. Well, you can see by Burt's picture there what a good-looker he is, so I figured I'd get to know him better by volunteering to help with the bees. By the end of summer we got around to the heart of the matter, which was the beeswax. He'd been storing it in the honey house for years, figuring sometime he'd use it for something. That time had come, and he suggested I make some candles, which I did, and took them over to the local Junior High School in Dover-Foxcroft, where we sold them at the 8th Annual Christmas Craft Fair and Bake Sale for three dollars a pair. By the end of the day, we'd taken in $200, and we knew that our business venture was bound for glory.
Well, as I mentioned, Burt lived in an 8' x 8' cabin and my kids and I were camped in a one room tent, so it was pretty obvious we needed to find more spacious quarters for our growing honey and candle operation. A friend came to the rescue when he agreed to rent out his old one room schoolhouse for $150 a year, which was the cost of the fire insurance on the place. It had been vacant for about fifteen years, except for the mice and squirrels, and though it had no heat, electricity, running water, or windows, the price was right, and it became corporate headquarters. We fixed the broken windows with cardboard, installed a gas kitchen range and some kerosene lamps, and were ready for anything.

How we got started making lip balm and ended up in North Carolina is another story, and a long one at that, so I'll save it for some other time. I do hope you enjoy looking through the website at all the stuff we make now. The honey and candles are gone, the kids are grown, our friend sold the schoolhouse and now it's a tattoo parlor, and Burt bought a classic motorcycle with his earnings, but otherwise everything's pretty much the same here at Burt's Bees.
Posted by Fran Hardy at 3:03 PM