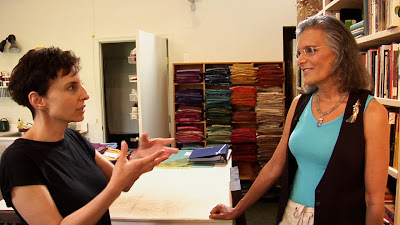 Interviewing Lauren Camp in her studio in La Cienega
Multi-talented Lauren Camp is going to be included in our new documentary "Earth Chronicles Project, The Artist's Process: New Mexico". Our first airing of the documentary in process will be at New Mexico Highlands University January 31st at 7pm in Ilfeld Auditorium, open and free to the public. This will be a rare opportunity to see one of our documentaries in progress. It will still have a very finished and polished style because Bob, our co-producer, cameraman and editor is a perfectionist.
I do the planning and interviewing and coordination on our documentaries but Bob is the guy who takes all that beautiful footage he has shot and makes it work creatively to create a compelling story for each segment.

So back to Lauren.....Lauren is an empresario of mixed media, language and radio.
Maybe you have heard her wonderful melange of sound, music and poetry on her radio show on Santa Fe Public Radio KSFR 101.1 called aptly 'Audio Saucepan'. This is a quote from one listener that aptly describes her unique program. One avid listener explains, “Audio Saucepan is such a provocative and refreshing blend of poetry, spoken word, jazz and audio exploration that I can scarcely contain my delight with each broadcast. Lauren Camp doesn’t so much moderate her show; she performs it. It is a rare foray into the power and mystery of radio at its best, an oasis for the ears.”

If you are not in the listening area you can hear a live stream of her radio show by going to KSFR's website. http://www.ksfr.org/ The show is on the air from 5-6pm MST on Sundays.
Lauren not only has a lyrical voice she creates a sense of mystery and drama when she reads her poetry and the poetry of others. On her radio show you will only hear the poetry of others but she is a masterful writer of poetry and performs extensively. She also has a published book of her poems available for purchase called "This Business of Wisdom". Go to her website for information on how to purchase it. http://www.laurencamp.com/poetry/booksrecords.shtml 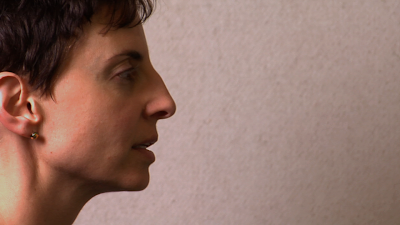 This interview will be unique in it's movement from interview and b-roll to Lauren reading her poems in her melodic and haunting voice. 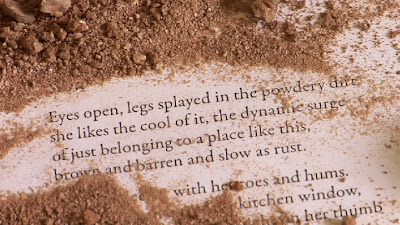 A visual Bob created for the reading of excerpts from one of one of Lauren's poems named "Slow"
Be prepared to see an engaging and unique interview with Lauren in our documentary.....

Lauren loves teaching and has helped so many others find their voice through working with her. If you love writing, want to hone your writing skills or find your unique writing expression go to Lauren's website and explore one of her workshops. http://www.laurencamp.com/poetry/workshops.shtml

Last but not least by any means, Lauren is a multi-media artist who often works with fiber. We will be including Lauren's work in our two exhibitions that accompany our documentary in New Mexico. The first is at New Mexico Highlands University in Las Vegas, N.M. January 14-February 14, 2013 at the Burris Hall Gallery. Then we will be at Santa Fe Art Institute for the month of April 2013. There will also be workshops, an artist roundtable and other accompanying workshops and activities happening in conjunction.
Lauren will be including two pieces from her in progress series on the four seasons in New Mexico, a land of intense contrast. You will be able to see "Wind Season" and "Acres of June-July". For those of us who live here we know what a great part wind plays in the shaping of our land as does fire, both of which are not always comfortable to live with but make up the strong voice of this land we call New Mexico. 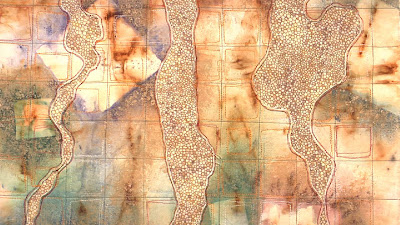 To find out more about Lauren go to her website http://www.laurencamp.com/index.shtml
Visit her blog and you will get a preview of what will be happening on her radio show as well as other wonderful 'wordsmithing' from Lauren http://laurencamp.com/whichsilkshirt/
And of course listen to her on Audio Saucepan Sunday nights from 5-6pm MST on the radio or streaming at http://www.ksfr.org/

http://en.wikipedia.org/wiki/Multimedia_artist
Multimedia artists are contemporary artists who use a wide range of media to communicate their art. Multimedia art includes, by definition, more than one medium, therefore multimedia artists use visual artin combination with sound art, moving images and other media. The art can take the form of installation art, found objects presented in an artistic form, or kinetic sculpture, among others.
It is important to distinguish between multimedia art and mixed media artworks. Within the visual arts, mixed media tends to refer to work that combines various traditionally distinct visual art media such as certain works of Frank Stella or Jane Frank which merge painting and sculpture, for example. A work on canvas that combines oil paint, newspaper collage, chalk, glass and ink, for example, could be called a "mixed media" work - but not multimedia. Multimedia art implies a broader scope than mixed media, as in creations combining visual art media with elements usually considered the proper domain of literature, drama, dance, filmmaking, or music.
Multimedia artwork also frequently engages senses other than sight, such as hearing, touch, or smell. A multimedia artwork can also move, occupy time, or develop over time, rather than remaining static as with traditional media. Another frequent trait of multimedia artworks is the use of advanced technology, such as electronic or computer-generated sound, video, animation, and interactivity.
Certain traditional genres such as opera and film are inherently multidisciplinary or even "multimedia" in a very loose sense, since they involve drama, literature, visual art, music, dance, and costumes. Indeed, a union of the arts was exactly what Richard Wagner imagined in his ideal of the "Gesamtkunstwerk" or a "synthesis of the arts" (literally: "complete artwork").
Nevertheless, in contemporary terms, opera or even movies would not properly be considered "multimedia art." A work of multimedia art is usually mounted on a smaller scale than an opera or a movie and is typically created entirely by a single person (rather than the collaborative effort of opera or moviemaking). Multimedia works do not usually require performers. If performers are used, they are usually untrained people, as in audience members who interact with the piece, as opposed to trained singers or actors. Multimedia artwork is often presented in a curated museum or gallery setting, in which the piece is understood to be an extended form of visual art. The creator of a multimedia work of art is typically someone with a formal background in visual art.
http://en.wikipedia.org/wiki/Poetry


Poetry (from the Greek poiesis — ποίησις — with a broad meaning of a "making", seen also in such terms as "hemopoiesis"; more narrowly, the making of poetry) is a form of literary art which uses the aesthetic qualities of language to evoke meanings in addition to, or in place of, the prosaic ostensible meaning.
Poetry has a long history, dating back to the Sumerian Epic of Gilgamesh. Early poems evolved from folk songs such as the Chinese Shijing, or from a need to retell oral epics, as with the Sanskrit Vedas, Zoroastrian Gathas, and the Homeric epics, the Iliad and the Odyssey. Ancient attempts to define poetry, such as Aristotle's Poetics, focused on the uses of speech in rhetoric, drama, song and comedy. Later attempts concentrated on features such as repetition, verse form and rhyme, and emphasized the aesthetics which distinguish poetry from more objectively-informative, prosaic forms of writing. From the mid-20th century, poetry has sometimes been more generally regarded as a fundamental creative act employing language.
Poetry uses forms and conventions to suggest differential interpretation to words, or to evoke emotive responses. Devices such as assonance, alliteration, onomatopoeiaand rhythm are sometimes used to achieve musical or incantatory effects. The use of ambiguity, symbolism, irony and other stylistic elements of poetic diction often leaves a poem open to multiple interpretations. Similarly, metaphor, simile and metonymy[1] create a resonance between otherwise disparate images—a layering of meanings, forming connections previously not perceived. Kindred forms of resonance may exist, between individual verses, in their patterns of rhyme or rhythm.