My Artist's Process: The Sycamore from Oklahoma in progress revisited 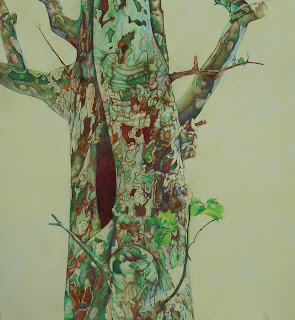 http://creativenativeproject.blogspot.com/2011/06/inside-look-my-process-in-studio.html
Above is a link to the first blog I did on this sycamore drawn in colored pencil on acrylic ground on panel, in process and still not completed. And the picture above shows where it is now in its development. Some artists don't like people to see their work in progress especially in person in the studio. I guess it interrupts their flow or they don't want any comments to influence them. My process involves such a long time drawing each little detail of bark in my trees getting lost in the abstraction and texture and is so internal and compulsive that I don't mind visitors although I really don't want feedback on a work in process or a completed work (unless it is praise, honestly) except from my husband Bob who is my dear and valued critic. Sometimes he sees things that I miss having looked at it for over a month of it's evolution and his eye for lighting through his film work has really influenced me. This piece will have a lot more drama and chiaroscuro when it is complete and I will be posting it in the next few weeks. Below are some details of the bark and limbs in progress. My friend Robbie Douglas also a painter turned me on to Kilz instead of gesso. It makes an excellent durable sealer and then I tint Golden Absorbent ground for the acrylic ground as the next layer to draw on. I welcome any artists who read this blog to comment and talk about their process how it differs, or is similar to mine. We are fascinated to explore creative minds of all kinds in our Creative-Native Project series of documentaries. 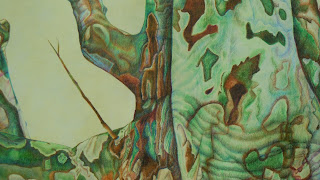 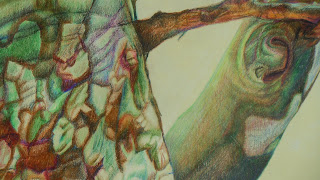 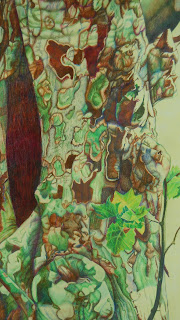 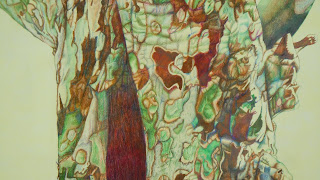 http://en.wikipedia.org/wiki/Chiaroscuro
Chiaroscuro (English pronunciation: /kiˌɑːrəˈskjʊəroʊ/, Italian: [kjarosˈkuːro] "light-dark") in art is characterized by strong contrasts between light and dark, usually bold contrasts affecting a whole composition. It is also a technical term used by artists and art historians for using contrasts of light to achieve a sense of volume in modelling three-dimensional objects such as the human body.

Origin in the chiaroscuro drawing

Chiaroscuro originated during the Renaissance as drawing on coloured paper, where the artist worked from the paper's base tone towards light using white gouache, and towards dark using ink, bodycolour orwatercolour.[1][2] These in turn drew on traditions in illuminated manuscripts, going back to late Roman Imperial manuscripts on purple-dyed vellum. Chiaroscuro woodcuts began as imitations of this technique.[3]When discussing Italian art, the term is sometimes used to mean painted images in monochrome or two colours, more generally known in English by the French equivalent, grisaille. The term early broadened in meaning to cover all strong contrasts in illumination between light and dark areas in art, which is now the primary meaning.

"La Fornarina" by Raphael, shows delicate modelling chiaroscuro in the body of the model, for example in the shoulder, breast, and arm on the right.
The more technical use of the term chiaroscuro is the effect of light modelling in painting, drawing or printmaking, where three-dimensional volume is suggested by the value gradation of colour and the analytical division of light and shadow shapes - often called "shading". The invention of these effects in the West, "skiagraphia" or "shadow-painting" to the Ancient Greeks, was traditionally ascribed to the famous Athenian painter of the 5th century BC, Apollodoros. Although virtually no Ancient Greek painting survives, their understanding of the effect of light modelling can still be seen in the late 4th century BC mosaics of Pella, Macedonia, in particular the Deer Hunt, in the House of the Abduction of Helen, inscribed gnosis epoesen, or 'knowledge did it'.
They also survived in rather crude standardized form in Byzantine art and were refined again in the Middle Ages to become standard by the early fifteenth-century in painting and manuscript illumination in Italy and Flanders, and then spread to all Western art. The Raphael painting illustrated, with light coming from the left, demonstrates both delicate modelling chiaroscuro to give volume to the body of the model, and also strong chiaroscuro in the more common sense in the contrast between the well-lit model and the very dark background of foliage. However, to further complicate matters, the compositional chiaroscuro of the contrast between model and background would probably not be described using this term, as the two elements are almost completely separated. The term is mostly used to describe compositions where at least some principal elements of the main composition show the transition between light and dark, as in the Baglioni and Geertgen tot Sint Jans paintings illustrated above and below.
Chiaroscuro modelling is now taken for granted, but had some opponents; the English portrait miniaturist Nicholas Hilliard cautioned in his treatise on painting against all but the minimal use we see in his works, reflecting the views of his patron Queen Elizabeth I of England:"seeing that best to show oneself needeth no shadow of place but rather the open light...Her Majesty..chose her place to sit for that purpose in the open alley of a goodly garden, where no tree was near, nor any shadow at all..."[4]
In drawings and prints hatching, or shading by parallel lines, is often used to achieve modelling chiaroscuro. Washes, stipple or dotting effects, and "surface tone" in printmaking are other techniques.
http://en.wikipedia.org/wiki/Acrylic_paint
Acrylic paint is fast drying paint containing pigment suspension in acrylic polymer emulsion. Acrylic paints can be diluted with water, but become water-resistant when dry. Depending on how much the paint is diluted (with water) or modified with acrylic gels, media, or pastes, the finished acrylic painting can resemble a watercolor or an oil painting, or have its own unique characteristics not attainable with other media.
Dr. Otto Rohm invented acrylic resin, which quickly transformed into acrylic paint. Acrylics were first made commercially available in the 1950s. These were mineral spirit-based paints called Magna[1] offered by Bocour Artist Colors. Water-based acrylic paints were subsequently sold as "latex" house paints, although acrylic dispersion uses no latex derived from a rubber tree. Interior "latex" house paints tend to be a combination of binder (sometimes acrylic, vinyl, pva, and others), filler, pigment, and water. Exterior "latex" house paints may also be a "co-polymer" blend, but the very best exterior water-based paints are 100% acrylic.[2] Soon after the water-based acrylic binders were introduced as house paints, artists and companies alike began to explore the potential of the new binders. Water-soluble artists' acrylic paints became commercially available in the 1950s, offered by Liquitex, with high-viscosity paints similar to those made today becoming available in the early 1960s.[3]
Techniques
Main article: Acrylic painting techniques
Acrylic artist paints may be thinned with water and used as washes in the manner of watercolor paints, but the washes are not re-hydratable once dry. For this reason, acrylics do not lend themselves to color lifting techniques as do gum arabic based watercolor paints.
Fluorescent acrylic paints lit by UV light. Paintings by Beo Beyond
Acrylic paints with gloss or matte finishes are available, although a satin (semi-matte) sheen is most common; some brands exhibit a range of finish (e.g., heavy-body paints from Golden, Liquitex, and Winsor & Newton). As with oils, pigment amounts, and particle size or shape can naturally affect the paint sheen. Matting agents can also be added during manufacture to dull the finish. The artist can mix media with their paints and use topcoats or varnishes to alter or unify sheen if desired.
When dry, acrylic paint is generally non-removable from a solid surface. Water or mild solvents do not re-solubilize it, although isopropyl alcohol can lift some fresh paint films off. Toluene and acetone can remove paint films, but they do not lift paint stains very well and are not selective. The use of a solvent to remove paint will result in removal of all of the paint layers, acrylic gesso, etc. Oils can remove acrylic paint from skin.[4]
Only a proper, artist-grade acrylic gesso should be used to prime canvas in preparation for painting with acrylic. It is important to avoid adding non-stable or non-archival elements to the gesso upon application. However, the viscosity of acrylic can successfully be reduced by using suitable extenders that maintain the integrity of the paint film. There are retarders to slow drying and extend workability time and flow releases to increase color-blending ability.
http://www.goldenpaints.com/technicaldata/absorb.php
GOLDEN Absorbent Ground can be used to create a porous, paper-like surface on many different substrates. It is uniquely formulated for a high level of absorbency when dry. Applied over gessoed canvas, Absorbent Ground allows for wash and staining effects on a stable acrylic film as an alternative to staining raw canvas. Watercolors may also be used, although they will retain their water sensitivity.