Jeri Redcorn and the Caddo Nation 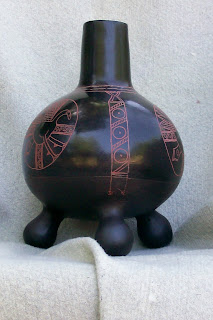 This piece courtesy of Jeri Redcorn copyright. This is her Turkey Dance Tripod and was recently presented to Justice Sandra Day O'Connor who did the turkey dance with Jeri. The Turkey Dance, Nuh-Koa-Shun is the most ceremonial of the Caddo dances and is a victory dance. We will be interviewing Jeri at her home and studio in Norman Oklahoma.
www.caddonation-nsn.gov
en.wikipedia.org/wiki/Caddo
The Caddo Nation is a confederacy of several Southeastern Native American tribes, who traditionally inhabited much of what is now East Texas, northernLouisiana and portions of southern Arkansas and Oklahoma. Today the Caddo Nation of Oklahoma is a cohesive tribe with its capital at Binger, Oklahoma. The different Caddo languages have converged into a single language. The Caddo Nation is a federally recognized tribe. They were previously known as the Caddo Tribe of Oklahoma. A tribal constitution provides for a tribal council consisting of eight members with a chairperson, based in Binger, Oklahoma.[2] The tribal complex, dance grounds, and the Caddo Heritage Museum are located south of Binger. 5000 people are enrolled in the tribe, with 2500 living within the state of Oklahoma. The tribe operates its own housing authority and issues its own tribal vehicle tags.[1] They maintain administrative centers, dance grounds, several community centers, and an active NAGPRA office.
Several programs exist to invigorate Caddo traditions. The tribe sponsors a summer culture camp for children.[3] The Hasinai Society[4] and Caddo Culture Club[5] both keep Caddo songs and dances alive, while the Kiwat Hasinay Foundation is dedicated to preserving the Caddo language.[6] Map of the Caddoan Mississippian culture and some important sites
The Caddo are thought to be an extension of Woodland period peoples, the Fourche Maline culture and Mossy Grove cultures who were living in the area of Arkansas, Louisiana, and Texas between 200 BCE to 800 CE.[8] The Wichita and Pawnee are related to the Caddo, as shown by their speaking Caddoan languages. By 800 CE this society had begun to coalesce into the Caddoan Mississippian culture. Some villages began to gain prominence as ritual centers, with elite residences and temple mound constructions. The mounds were arranged around open plazas, which were usually kept swept clean and were often used for ceremonial occasions. As complex religious and social ideas developed, some people and family lineages gained prominence over others.[8] By 1000 CE a society that is defined as "Caddoan" had emerged. By 1200 the numerous villages, hamlets, and farmsteads established throughout the Caddo world had begun extensive maize agriculture.[8] Their artistic skills and earthwork mound-building flourished during the 12h and 13th centuries.[9] Spiro mounds, some of the most elaborate in the United States, were made by ancestors of the Caddo and Wichita.[10] The Caddo were farmers and enjoyed good growing conditions most of the time. However, the Pineywoods were affected by the Great Drought, from 1276–1299 CE.[11]
Archeological evidence that the cultural continuity is unbroken from prehistory to the present, and that the direct ancestors of the Caddo and relatedCaddo language speakers in prehistoric times and at first European contact and the modern Caddo Nation of Oklahoma is unquestioned today.[12] Caddo turkey dance, Caddo National Complex, Binger, Oklahoma, 2000. The turkey dance relays Caddo history.
Caddo oral history says the tribe emerged from an underground cave, called Chahkanina or "the place of crying," located at the confluence of the Red andMississippi Rivers in northern Louisiana. Their leader, named Moon, instructed the people not to look back. An old Caddo man carried with him a drum, a pipe, and fire, all of which continued to be important religious items. His wife carried corn and pumpkin seeds. As people and accompanying animals emerged, the wolf looked back and the exit was closed to the remaining people and animals.[13]
The Caddo peoples moved west along the Red River, or Bah'hatteno in Caddo.[14] A Caddo woman, Zacado, instructed the tribe in hunting, fishing, home construction, and clothing. Caddo religion focuses on Kadhi háyuh, translating to "Lord Above" or "Lord of the Sky." In early times, the people were led by priests, including a head priest, the xinesi, who could commune with spirits residing near Caddo temples.[13] A cycle of ceremonies corresponded to corn cultivation. Tobacco was and is used ceremonially. Early priests drank a purifying sacrament made of wild olive leaves.[15]

The Caddo lived in the Piney Woods eco-region of the United States up to the foothills of the Ozark Mountains and often near the Caddo River. The Piney Woods is a dense forest of deciduous and conifer flora covering rolling hills, steep river valleys, and intermittent wetlands called Bayous. Several Caddo villages were resettled, including the community of Elysian Fields, Texas, and Nacogdoches and Natchitoches both of which have kept their original names. The Caddo were progressively moved further west until they reached what is now western Oklahoma. The geography of the drier plains was quite a contrast to the lush hilly forest that were formerly their homeland. The Caddo's food varied in many types, the most common being dried corn. Sunflower seeds and pumpkins were also important staples with cultural significance, as were wild turkeys. Kaw-u-tz, photographed in 1906. Photo courtesy SMU.
The Caddo first encountered Europeans in 1541 when the Hernando de Soto Expedition came through their lands.[16] De Soto's force had a violent clash with one band of Caddo Indians, the Tula, near Caddo Gap, Arkansas. This event is marked by a monument that stands in the small town today.
The Caddo tribes were divided into three confederacies when first encountered by the Europeans, the Hasinai, Kadohadacho, and Natchitoches, and loosely affiliated with other tribes. The Haisinai lived in East Texas, the Kadohadacho lived near the border of Texas, Oklahoma, and Arkansas, and the Natchitoches lived in now northern Louisiana.[17]
With the arrival of missionaries from Spain and France a smallpox epidemic broke out that decimated the population. Measles, influenza, and malaria also devastated the Caddo, as they were Eurasian diseases to which they had no immunity.[14]
Before extensive European contact, some of the Caddo territory was invaded by migrating Osage, Ponca, Omaha and Kaw, who had moved west beginning about 1200 CE because of years of warfare with the Iroquois in the Ohio River area of present-day Kentucky. The Osage particularly dominated the Caddo and pushed them out of some former territory, becoming dominant in the region of Missouri, Arkansas, Kansas and Oklahoma. The new tribes had become well settled in their new traditional grounds west of the Mississippi by mid-18th century European contact.[14]
Having given way over years before the power of the former Ohio Valley tribes, Caddos later negotiated for place with Spanish, French, and finally Anglo-American settlers. After the 1803 Louisiana Purchase, the United States government sought to ally with the Caddos. In 1835 the Kadohadacho, the northernmost Caddo confederacy, signed a treaty with the US to relocate to then Mexico. This area had been rapidly transformed by greatly increased immigration of European Americans, who in 1836 declared independence from Mexico with the Republic of Texas.[14] "Texas" comes from the Hasinai word táysha?, meaning "friend."[18]
In 1845 when Texas was admitted to the US as a state, the government forced the relocation of both the Hasinai and the Kadohadacho onto the Brazos Reservation. In 1859 many of the Caddo were relocated to Indian Territory west of the Mississippi River. After the Civil War, the Caddo were concentrated on a reservation located between the Washita and Canadian Rivers.[14]
In the late 19th century, the Caddo took up the Ghost Dance religion, which was widespread among American Indian nations in the West. John Wilson, a Caddo-Delaware medicine man who spoke onlyCaddo, was an influential leader in the Ghost Dance. In 1880, Wilson became a peyote roadman. The tribe had known the Half Moon peyote ceremony, but Wilson introduced the Big Moon ceremony to them.[19] The Caddo tribe remains very active in the Native American Church today.
After the turn of the century, the Curtis Act dismantled tribal institutions. The Dawes Act was directed at assimilation by breaking up tribal common landholdings into allotments for individual members. The Caddo vigorously opposed allotment. Whitebread, a Caddo leader, said, that "because of their peaceful lives and friendship to the white man, and through their ignorance were not consulted, and have been ignored and stuck away in a corner and allowed to exist by sufferance."[14]
The Oklahoma Indian Welfare Act of 1936 provided the opportunity for the Caddo to reform their tribal government. They organized in 1938 as the Caddo Indian Tribe of Oklahoma. They ratified their constitution on 17 January 1938.[2] In 1976, they drafted a new constitution. During the 20th century, Caddo leaders such as Melford Williams, Harry Guy, Hubert Halfmoon, and Vernon Hunter have shaped the tribe.[14]
In a special election on 29 June 2002, six amendments were made to the constitution. Tribal enrollment is open to individuals with a documented minimum of 1/16 degree Caddo blood.[20]
Posted by Fran Hardy at 10:08 AM