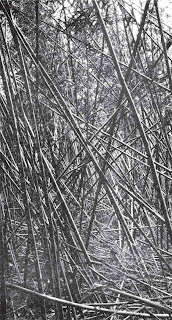 We are very thankful to Dr Ian Thompson , Choctaw Nation archaeologist, anthropologist and artist for allowing us to interview him and some of the tribal elders for our Oklahoma documentary. He will be taking us to a site along the river near Brown, Oklahoma where we can see the endangered freshwater mussels which are one of the essential ingredients added to the native clay which they dig for their pots. Their endangered status is due to water pollution. We will also visit a place where river cane grows  and is also endangered. Ian told me that years ago before his time one could see three miles of river cane at a location as far as the eye could see but now there are only patches. He will be telling us about it's uses for the Choctaw and we will interview Sue Folsom about the various crafts and traditions that are being revived. We will also be talking to the Tribal Language Department about the Choctaw language. As Ian expressed it to me for the Choctaw "language codes your thoughts". It will be fascinating to explore what this means.
We will be visiting a class where Choctaw traditional pottery is being taught. I am not going to say anymore about all of the information we will hearing and saying in our visit to Durant, OK as I have SO much to learn and will be sharing much more in our documentaries and on this blog May 15-16 while we are there, except to add this information from wikipedia below.
Also go to http://www.choctawnation.com

The Choctaw (alternatively spelt as Chahta, Chactas, Chato, Tchakta, Chocktaw, and Chactaw) are a Native American people originally from the Southeastern United States (Mississippi, Florida, Alabama, and Louisiana). The Choctaw language belongs to the Muskogean linguistic group. Noted 20th century anthropologist John Swanton suggested that the name was derived from a Choctaw leader.[2] Henry Halbert, a historian, suggests that their name is derived from the Choctaw phrase Hacha hatak (river people).[3]
The Choctaw are descendants of the Mississippian culture and Hopewellian people, who lived throughout the east of the Mississippi River valley and its tributaries. The early Spanish explorers of the 16th century encountered their ancestors.[4] In the 19th century, the Choctaw were known as one of the "Five Civilized Tribes" because they adopted and integrated numerous cultural and technological practices of their European American colonial neighbors. The Choctaw Nation of Oklahoma and the Mississippi Band of Choctaw Indians are the two primary Choctaw associations today, although smaller Choctaw groups are located in Alabama, Louisiana, and Texas.
During the American Revolution, most Choctaw supported the Thirteen Colonies' bid for independence from the British Crown. The Choctaw and the United States agreed to nine treaties. The last three treaties (Treaty of Doak's Stand, Washington City, and Dancing Rabbit) were designed to deracinate most Choctaw west of the Mississippi River.
U.S. President Andrew Jackson made the Choctaw exile a model of Indian removal making them the first Native Americans to travel on the Trail of Tears. The Choctaw were exiled (to the area now called Oklahoma) because the U.S. desired to expand territory available for settlement to European Americans,[5] wanted to save them from extinction,[6] and wanted to acquire their natural resources.[7]
With ratification in 1831 of the Treaty of Dancing Rabbit Creek, those Choctaws who chose to stay in the newly formed state of Mississippi were the first major non-European ethnic group to become U.S. citizens.[8][9][10][11] Article 22 sought to put a Choctaw representative in the U.S. House of Representatives.[8] The Choctaw began to seek political representation in the Congress of the United States in 1830.[12] During the Great Irish Famine (1845–1849) nearly twenty years prior to the founding of the Red Cross, the Choctaw were noted for their generosity in providing humanitarian relief for the people of Ireland.[13] During the American Civil War, the Choctaw in both Oklahoma and Mississippi mostly sided with the Confederate States of America.
After the Civil War, the Mississippi Choctaw fell into obscurity. The Choctaw in Oklahoma struggled to maintain a nation. In World War I, they served in the U.S. military as the first Native American codetalkers, using the Choctaw language as a natural code.
Posted by Fran Hardy at 12:20 PM