Awe and Wonder: Ancient Junipers in the Badlands 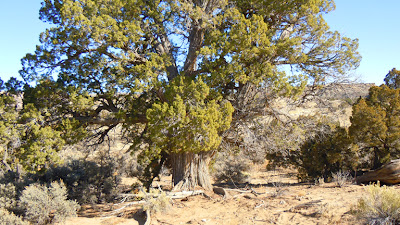 This ancient juniper in the Cejita Blanca badlands near Cuba, New Mexico is estimated to be about 1200 years old.

Awe and wonder is the most potent way to describe our experience in the San Juan Basin Badlands. As I discussed in my last blogpost it was the cutting of ancient junipers that I read about in the Rio Grande Sierran magazine that made me want to go to this very special place to see these trees. Who would think that such ancient trees would be found in such an arid moonscape? As I discussed in my previous post there is a push to make these badlands into an ERMA or one of the BLM's Extensive Recreation Management Areas. Please let the BLM know you support this. You can contact the Rio Grande chapter of the Sierra Club (Tom Gorman 505-438-3932 or nmccallan@mindspring.com) or the New Mexico Rio Puerco office of the BLM http://www.blm.gov/nm/st/en/fo/Rio_Puerco_Field_Office.html. 505-761-8700. Already the measures they have taken with rangers patrolling the areas and signage is halting the cutting of these ancient junipers. With climate change we may never see trees like this at this elevation again if they are not preserved.

Not only were the twisted ancient trees amazing but the otherworldy landscape we found them in was awe inspiring. According to Mike Richie, journalist, photographer and scientist who took us there this is not the most colorfully magnificent of the badlands but it certainly had a beauty that I found transfixing. It also inspired me to want to know more about what geologic forces formed these ancient lands. 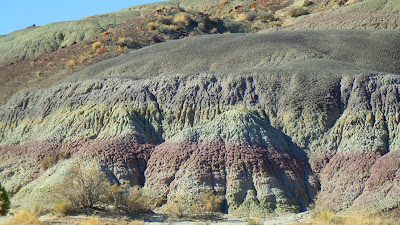 The formations are full of iron and other minerals. 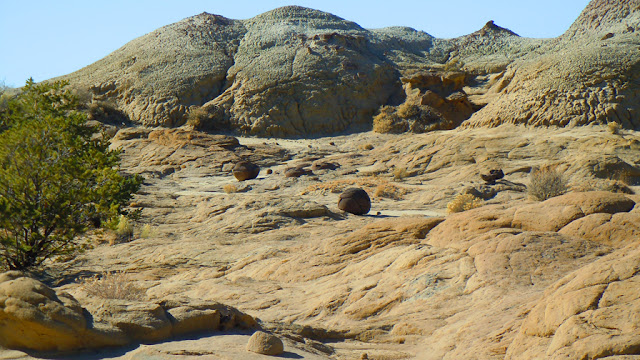 The strange round reddish rocks are called iron concretions and no one knows exactly what formed them.

These strange red rocks were sprinkled around the landscape. Apparently no one knows exactly how they were formed and in my fantasy mind they could have been the remains of dinosaur excrement. The mystery of these ancient landscapes is part of their allure. The petrified wood that is here tells scientists that this once was a rainforest which has grown more and more arid over time because of nature's changes and now our human contribution. 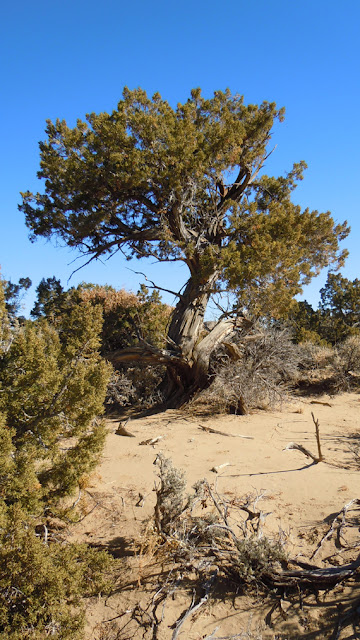 The juniper trees live on sand dunes which they anchor, as well as possibly deriving and retaining more moisture from them in order to survive. 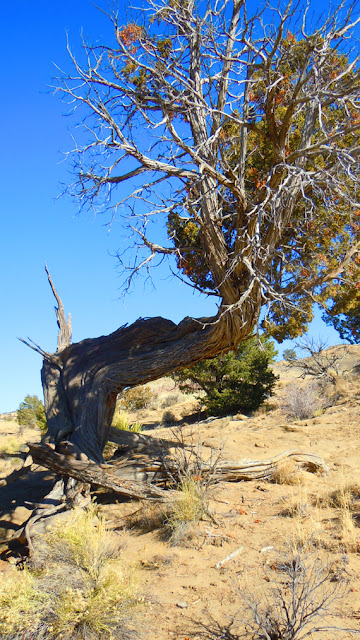 They struggle with the growing heat in our climate. We are now two zones hotter and all the climate zone maps are being revised to take that into account. But I love the twisted shapes they have taken to adapt and can't wait to paint these trees. I was ecstatic wandering around among them and gathering reference for my paintings. 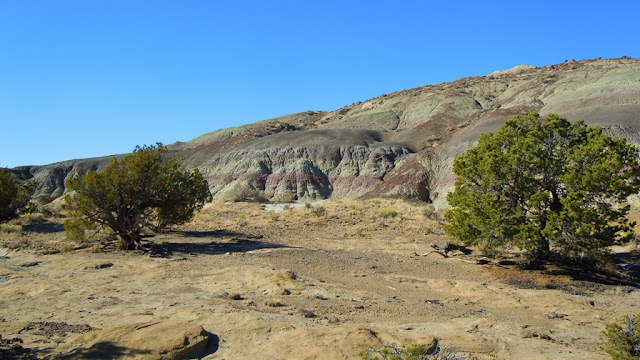 Who would think ancient trees would live in such a landscape?

http://en.wikipedia.org/wiki/Concretion
A concretion is a hard, compact mass of sedimentary rock formed by the precipitation of mineral cement within the spaces between the sediment grains. Concretions are often ovoid or spherical in shape, although irregular shapes also occur. The word 'concretion' is derived from the Latin con meaning 'together' and crescere meaning 'to grow'. Concretions form within layers of sedimentary strata that have already been deposited. They usually form early in the burial history of the sediment, before the rest of the sediment is hardened into rock. This concretionary cement often makes the concretion harder and more resistant to weathering than the host stratum.
There is an important distinction to draw between concretions and nodules. Concretions are formed from mineral precipitation around some kind of nucleus while a nodule is a replacement body.
Descriptions dating from the 18th century attest to the fact that concretions have long been regarded as geological curiosities. Because of the variety of unusual shapes, sizes and compositions, concretions have been interpreted to be dinosaur eggs, animal and plant fossils (called pseudofossils), extraterrestrial debris or human artifacts.
Click on the link and read more of the article below for those of you who are fascinated by geology and the forces that shaped the land of the Colorado Plateau.
http://geology.utah.gov/online/pdf/pi-77.pdf
Sunrise illuminates Colorado Plateau’s canyon country.
In the early morning light, cliffs radiate a rich red glow, and
a sculptured panorama of sandstone is revealed in a rich
palette of crimson, vermilion, orange, salmon, peach, pink,
gold, yellow, and white.  Nearby are black, spherical rock
marbles (iron concretions) collecting in small depressions,
like puddles of ball bearings.   These natural spherical balls
have been called  various names such as iron nodules, iron
sandstone balls, or moki marbles.  However, we use the
name “iron concretion” to describe both the composition
(iron oxide that is the dark mineral which cements the sand-
stone grains) and the formed shape (concretion).
What paints the sandstone such rich colors?  Why is red
a dominant color?  Where do the black marbles come from?
How did the black marbles form?  Is there a relationship
between sandstone colors and the marbles?  This booklet
explores the answers to these questions and poses other
questions yet unanswered. exhibits a wide range of colors from
shades of red to stark white.
In a privately owned area near Moab (southeastern
Utah), the Navajo Sandstone is a pale orange,
unbleached color.  Only 10 miles (15 km) to the
northwest of this picture, the upper portion of the
Navajo Sandstone formation is bleached white.

A badlands (also badland) is a type of dry terrain where softer sedimentary rocks and clay-rich soils have been extensively eroded by wind and water. It can resemble malpaís, a terrain of volcanic rock. Canyons, ravines, gullies, hoodoos and other such geological forms are common in badlands. They are often difficult to navigate by foot. Badlands often have a spectacular color display that alternates from dark black/blue coal stria to bright clays to red scoria.

I'm not sure if this is the species of juniper we saw? Any tree experts reading this?
http://en.wikipedia.org/wiki/Juniperus_occidentalis
Juniperus occidentalis (Western Juniper and Sierra Juniper) is a shrub or tree native to the western United States, growing in mountains at altitudes of 800-3,000 m (rarely down to 100 m).
The Juniperus occidentalis shoots are of moderate thickness among junipers, 1-1.6 mm diameter. The leaves are arranged in opposite decussate pairs or whorls of three; the adult leaves are scale-like, 1–2 mm long (to 5 mm on lead shoots) and 1-1.5 mm broad. The juvenile leaves (on young seedlings only) are needle-like, 5–10 mm long. The cones are berry-like, 5–10 mm in diameter, blue-brown with a whitish waxy bloom, and contain one to three seeds; they are mature in about 18 months. The male cones are 2–4 mm long, and shed their pollen in early spring.
The cones are an important food for several birds, including American Robin, Phainopepla and Cedar Waxwing; these digest the fleshy cone scales and disperse the seeds in their droppings. The plants often bear galls caused by the Juniper Tip MidgeOligotrophus betheli (Bibionomorpha: Cecidomyiidae); these are violet-purple fading to brown, 1–2 cm diameter, with dense modified spreading scale-leaves 6–10 mm long and 2–3 mm broad at the base.