TreeBeard lives in the Tallgrass Prairie 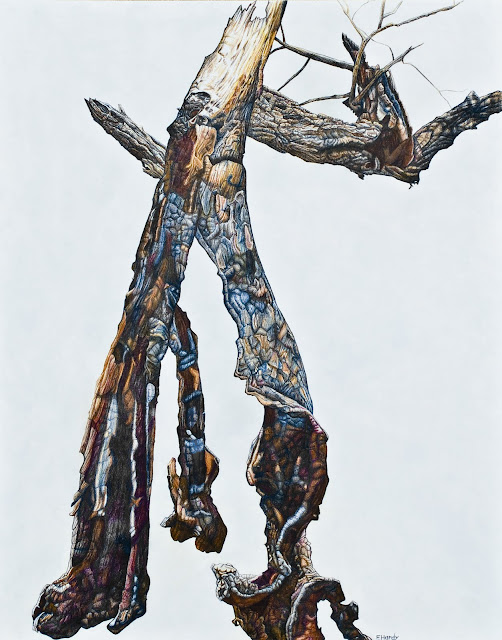 "TreeBeard Lives in the Tallgrass Prairie", 44" x 36", colored pencil on acrylic ground on panel
by Fran Hardy copyright
When we finished our interview with Bob Hamilton, director of the Nature Conservancy's Tallgrass Prairie Preserve, he said to make sure we saw TreeBeard on our way out. That was what he named a huge old cottonwood tree that had burned in one of the controlled burns that keep the prairie as grassland. The prairies used to burn frequently from lightening strikes and the native americans who set them ablaze to keep the land healthy for the bison and other large game. Without fire the prairies would become woods. The Tallgrass will be about seven feet tall by the fall and walking through it all one can see is grasses and sky above. It is a majestic experience. There used to be vast areas of prairie but now most of it has been used for agriculture. The Tallgrass Prairie Preserve and other prairie habitats that have been preserved gives us a taste of what a large part of the central United States used to be like.
The cottonwood that inspired TreeBeard had been burnt so that the whole center was hollowed out by fire, making him look like a walking creature. Bob Hamilton named him TreeBeard after  the character from Tolkein's 'Two Towers'. He saw him in the movie. I remembered him from the books which my father read me before I was young enough to read. This was well before his books became popular and there were no illustrations, so I made my own and we inserted them in the books.
Here is a picture of Bob shooting and Daniel Lay taking production stills of the tree that inspired my painting. This gives you a glimpse of how I change the actual to the imaginary. 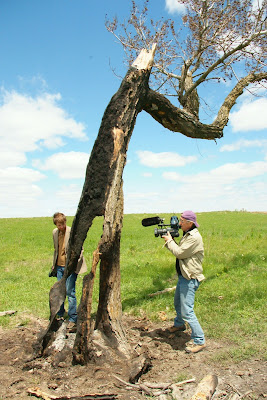 http://www.nature.org/ourinitiatives/regions/northamerica/unitedstates/oklahoma/placesweprotect/tallgrass-prairie-preserve.xml
For more information on the Nature Conservancy's Tallgrass Prairie Preserve see the link above.
http://en.wikipedia.org/wiki/Tallgrass_prairie
The tallgrass prairie is an ecosystem native to central North America, with fire as its primary periodic disturbance. In the past, tallgrass prairiescovered a large portion of the American Midwest, just east of the Great Plains, and portions of the Canadian Prairies. They flourished in areas with rich loess soils and moderate rainfall of around 760 to 890 mm (30 to 35 in) per year. To the east were the fire-maintained eastern savannas. In the northeast, where fire was infrequent and periodic windthrow represented the main source of disturbance, beech-maple forestsdominated. In contrast, shortgrass prairie was typical in the western Great Plains, where rainfall is less frequent and soils are less fertile.
As its name suggests, the most obvious features of the tallgrass prairie are tall grasses, such as indiangrass (Sorghastrum nutans), big bluestem (Andropogon gerardii), little bluestem (Schizachyrium scoparium), and switchgrass (Panicum virgatum), which average between 1.5 and 2 m (4.9 and 6.6 ft) tall, with occasional stalks as high as 2.5 to 3 m (8.2 to 9.8 ft). Prairies also include a large percentage of forbs, such as lead plant (Amorpha spp.), prairie rosinweed (Silphium terebinthinaceum), and coneflowers.
The tallgrass prairie biome depends upon prairie fires, a form of wildfire, for its survival and renewal.[1] Tree seedlings and intrusive alien species without fire-tolerance are eliminated by periodic fires. Such fires may either be set by humans (for example, Native Americans used fires to drive bison and improve hunting, travel, and visibility) or started naturally by lightning. Researchers' attempts to re-establish small sections of tallgrass prairie in arboretum fashion were unsuccessful until they began to use controlled burns.
Technically, prairies have less than 5-11%[clarification needed] tree cover[citation needed]. A grass-dominated plant community with 10-49% tree cover is a savanna.
Due to accumulation of loess and organic matter, parts of the North American tallgrass prairie had the deepest topsoil recorded. After the steel plough was invented by John Deere, this fertile soil became one of America's most important resources. Over 99% of the original tallgrass prairie is now farmland.
Posted by Fran Hardy at 10:10 AM